Celebrating 45 Years of Mousing Around 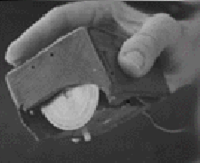 We write in praise of the humble computer mouse – or, more accurately, the mind that invented it. Dr. Douglas Engelbart, working with ARPA at the Stanford Research Center in Palo Alto, California, was the man who first conceived of and publicly demonstrated digital - that is, hand-motion - control of computing devices, in December, 1968.

Dr. Engelbart showed, via closed-circuit camera, a revolutionary computer interface which consisted not only of a traditional terminal keyboard, but also a primitive motion-capture device (the mouse) and a "chord-key" device that allowed users to execute commands with combinations of key strokes. In a time of VAX and building-sized mainframes, this was nothing short of revolutionary. During the same demonstration, Engelbart also showed collaborative audio/video conferencing via network -- a true visionary.

Luckily, this remarkable demonstration was preserved on film, and can be viewed on Stanford University's "MouseSite" pages, along with many other fascinating resources that chronicle the evolution of today's modern computing systems. And next time you click on a hyperlink or drag a row spreadsheet cells around, give a tip of the mental hat to the man who started it all.