A Visit to Amsterdam's Red Light Radio: New World of Internet Radio Based in Notorious Spot 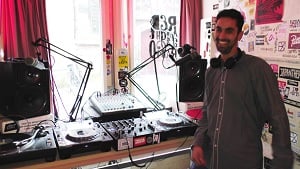 Amsterdam has always been one of the main art and cultural centers of Europe, so it is no surprise that some of the most creative online audio services in the world emanate from this city. There is the fascinatingly bizarre Radio Patapoe, the diverse cutting edge presentations of DFM, and one of the relatively new services, Red Light Radio.

Red Light Radio tends to be considerably more down-to-earth and focused than the other services, often featuring a club-oriented approach with deejays doing live mixes in real time, some world music, jazz and experimental heard on occasion, as well as in-studio interviews with artists presented in an appealing, freewheeling manor.

Unlike, say, Radio Patapoe, whose location I tried to hunt down at last IBC (only to be told that they are in a mysterious location known only to a few), Red Light Radio is right out in the open. Very open, in fact: they broadcast from a tiny studio in a former girlie window right in the District.

So, back in town for IBC 2014 and armed with an address from their website, I took a walk one afternoon to check out the marvelous Internet station that I have been enjoying so much back home in Cleveland these many months.

To my pleasant surprise, the crew was friendly, open and completely unpretentious. They actually have a little complex, which consists of the studio in the window, and two record shops in the rear courtyard.

I asked if I could interview someone associated with the operation, and down came Boris de Vries, who is sort of a general program coordinator.

Denny: So, Boris, who is behind Red Light Radio? 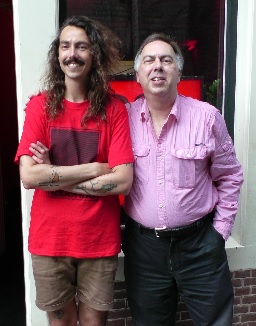 Denny: Where are the owners from?

Boris: They live in Amsterdam.

Denny: And when did they start up Red Light Radio?

Boris: Hugo went to New York. He had heard of East Village Radio. He went over to see it. And then he was really inspired. He finished his studies, but he was looking for jobs that would also be cool. And then he thought, "Let's start a radio station."

Denny: And what year was that?

Boris: Well, in November we're doing the fourth-year anniversary of this place.

Denny: And it started online?

Boris: Yeah. [Hugo] knew a guy who also had worked with radio and was really creative and knew a lot of people who were into music. That guy is Orpheu. So, that's how they started the plan to make the radio station that is Red Light Radio.

Denny: Now, what was the idea behind the programming of Red Light Radio? The founders must have had a certain style, a certain kind of music and a certain culture that they wanted to present.

Boris: Yes. Because they both have a lot of creative friends. It's like a network. Everybody is doing something that they really like. They put their heart in it. They just want to give all those people and their friends a stage to do a cool radio show.

Denny: So, I presume they were connected with the Amsterdam music scene?

Denny: So, they knew a lot of people that would be good potential on-air presenters and performers.

Boris: Yes. That was the main thing. They were convinced that they could put down a really good program with people who play music that you won't hear on the normal radio.

Denny: And did word get around Amsterdam that the service exists and even more people came down?

Boris: Yes, all the time. We get emails all the time from people who want to play, do a show here.

Denny: So, you have to do it from the studio here in Amsterdam. You can't send in a recording or do it by remote broadcast?

Boris: No. It must originate from Amsterdam. We really like the visibility of it and that people can join the webcam so that they can see the actual person putting down the records and having a [zip].

Denny: So, everything that we hear on Red Light Radio originates from the studio here?

Boris: Yes. When our day program is on because when we close at night or early in the morning, our archive plays on shuffle.

Boris: Yes. And we refresh the archive every now and then. Sometimes we have special guests over. We put that in the rotation.

The Last On-Air Vestige of Vinyl?

Denny: I noticed that there is a lot of vinyl that you still play.

Denny: Do you emphasize vinyl because the mechanics of doing the mixing is better for vinyl? Is there any reason why we see vinyl more than files?

Boris: Most of the people thought vinyl is always more special. We have a lot of “diggers”….people who travel for records.  We have the whole complex here. There are offices around us and two record stores on the square here on the left, plus the Red Light Radio studio. We coordinate it all.  So, they pay rent to us and we make sure that they're all cool, creative people.

Denny: And the record store is open to the public? People can come in?

Boris: Yeah. They need to ring a bell, though, and then the fence on the side opens.

Denny: I love it. And it's a lot of vinyl in there or CDs too?

Denny: Really? Only vinyl, no CDs?

Denny: So, what is the appeal of vinyl? Some people say it's warmer than a digital recording.

Boris: It sounds better. It looks better. It's cooler to [hunt] down. With files, everybody can just like download [discographies] with a mouse click and it's just more fun to look for that record and show everybody, "I've got this record."

Denny: So, what are th 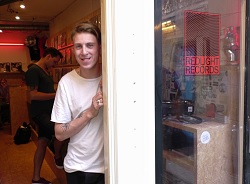 e hours of the record store?

Boris: There are two record stores. One is run by guys who aren't really using a clock. And they are travelling a lot. They are crazy guys. They travel to crazy African countries to buy records.

Denny: I hear a lot of exotic and fascinating music on Red Light Radio. That's what attracted me to it.

Denny: So, there are actually two record stores.

Denny: One is like run by hobbyists, somebody's hobby that they do?

Boris: Yes. They both are like hobby, but serious hobby. The Red Light Records, they've also got like four record labels. They reissue obscure stuff. One of the guys, he's from Greek origin, I believe. But he's issuing only Greek private press music from the 70s and 80s.

Denny: Wow. Talk about a niche!

Boris: Stuff nobody ever heard. They get in contact with those guys from way back when and they're like, "Whoa, you're into my music?"

Denny: So, is the label Red Light Radio Records?

Boris: No. The Greek label is called Into the Light. They've got like a reissue label of other obscure stuff, not only Greek. That is called Music from Memory. They've got a new label called Second Circle that is more focused on like dance music, like electronic music, more modern. And then there's also another label coming with only disco edits.

Denny: So, how is all of this funded?

Denny: Not really. Tell me.

Boris: Okay. This area, the postal code is 1012. Prostitution, it's kind of a problem because it's uncontrollable. Some of the girls are forced to do the work. That makes it hard. You can't control it. So, they wanted to give a couple of the old prostitution buildings a new direction. So, they bought out the owners. And then they rented it out to artists to make it like workspace and clothing and stuff. But they didn't last very long. A lot of people were using it just as a shop window.

So, then we came and we rented only the ground floor for three months. And then we did a crowd-funding, a kind of Kickstarter thing only for art projects. It's a Dutch thing. And then we raised 30,000 Euros so Hugo and Orpheu could buy all the equipment to get it going. And then we organized parties to raise money.

Denny: Is there any government aid?

Boris: No, not really. There was reduced rent in the beginning. But since we have the whole building, the whole complex, we ask a little bit more rent so we can still exist. We work together with Converse.

Boris: Yeah. They are really into giving something back to the artists.

Denny: How did you involve Converse?

Boris: From since the 70s, artists have worn their shoes. They really believe in art. So, we organize parties with them together.

Denny: So, between fundraising and subletting some of the areas that you have to other renters and Converse's help, that keeps the whole organization going, right?

Boris: Yeah. It keeps it going. And sometimes there's this thing called Museum Night. They want to have DJ programs. They know we know a lot of DJs. So, we program that. And then we also get money for that. We do all kinds of those projects.

Denny: So, if someone is reading this who lives in metropolitan Amsterdam and would like to do a show, could they just come down and ask you and you would consider it?

Boris: It's always better to send an email so we can listen to it with the whole team.

Denny: And the team would decide whether the person is unique or compelling enough to be a part of this.

Boris: Yes. It is kind of low key, but we already have a lot of shows. So, it really must bring something new to the table.

Denny: What is the email address if anyone is interested.

Denny: Do you know about how much of your listenership is out there? Do you have any metrics about how many listeners you have?

Boris: Well, we've got the Soundcloud archive. We can always see the archive. But live, we can't really see it. The other week, we had this girl over and she was recently signed to a label and that show got like 20,000 listens in a couple of days. We get a lot of touring guests, people playing the dance clubs here in Amsterdam on weekends. They come here for a show during the day.

Denny: It is great to see and hear a grassroots service like this, live and vibrant, tied so closely to the city, the artists and the music itself. I wish you all the luck in the world, and convey best wishes from all of us in The United States.