In the past, audio processing and monitoring required the purchasing of multiple, specialized hardware to support each function in the air chain. But now, thanks to the increase in the speed of Ethernet connectivity, and IT-based processing power, many of these same processes can be condensed and supported over IP. Audio in particular is making a move to the IP realm with the recent AES67 standard bringing interoperability between manufacturers. Even with this standardization, Audio over IP (AoIP) is still not being used to its maximum potential in the broadcast space.

Right now, AoIP tends to be used as a point-to-point replacement for MADI as opposed to the efficient and flexible distributed networked architecture that multicast routing enables. This is a concept that, with careful planning and informed choices, can replace the baseband system components where audio is separated from video and increase the number of audio channels supported. One such solution is the Linear Acoustic AERO.soft enterprise-class television audio processor, which eliminates the need for multiple pieces of hardware by including multiple functions in one single package. This technology, combined with the recent adoption of the new AES67 standard for AoIP, helps to move this condensing of functions one step further.

Bringing Linear Acoustic AEROMAX® loudness control, UPMAX® upmixing and ITU-R BS.1770 metering and logging, supporting ATSC and EBU, plus available Dolby® encoding onto the AERO.softs server-based platform offers more hardware consolidation but also will change the way people think of their audio system. Since this system is not limited by hardware, it enables an expandable number of audio processors to serve an entire facility, adapting as needs and standards change. A laptop or PC provides management of the AoIP streams, audio processing, loudness control and also metering and logging. This consolidation of devices in the air-chain results in higher density, reduced space requirement, less AC power, reduced cooling requirements, less wiring, better system management and faster design and installation. 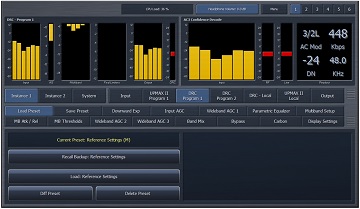 While a complete move to a total AoIP infrastructure may not be feasible at the moment, there are ways AoIP solutions can be implemented now and pave the way for a complete workflow. AERO.soft, for example, is transmitting via Livewire+ protocol, which transmits using the AES67 standard. To create a hybrid approach, the companys AoIP-grade switch (such as the Axia xSwitch), and one or more nodes (such as the Linear Acoustic SDI xNode or the Axia AES or analog xNodes), can be deployed to support connectivity to baseband signals.

AoIP can handle more than just monitoring and processing, as it has the capability to support all audio in the studio. The true benefit of an AoIP audio system deployed within a television broadcast infrastructure becomes more apparent when considering the possibility for converging the subsystems that would otherwise have remained separate. By bringing together telecommunications, intercom, in-studio audio and external audio into one system, you dramatically decrease the number of physical interconnections, cabling, patching, routing, distribution and terminal hardware.

The emergence of the AES67 standard for AoIP adds many possibilities for broadcast outlets beyond the distribution of audio. Many facilities are using AoIP to become more flexible while reducing overall costs. Solutions like the Linear Acoustic AERO.soft is harnessing AoIP to provide multiple audio processes simultaneously. It will be critical in the coming years to embrace a scalable technology like AoIP if we want to seamlessly accommodate emerging audio requirements and video formats.