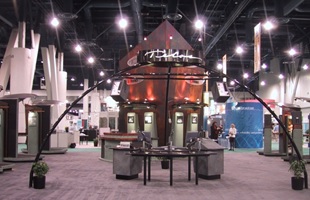 At 11:59 P.M. on a Sunday in April, 2002, I was sitting on the thinly carpeted floor of the NAB convention hall watching as a software guru fed lines of code into his IBM Thinkpad. The next morning, the doors of the hall would open, and our newest product – a console surface with an IP-connected DSP mixing engine – would be displayed for the examination of broadcasters from all over the world.

Anyone who’s ever introduced a new technology knows the bundle of snakes that swim in the pit of your stomach just before it goes public – and mine felt like full-on King Cobras.

The next day, the world’s first AoIP mixing console went on display: the Axia SmartSurface, which was connected to the world’s first Livewire AoIP network, built of Axia Audio Nodes. And the code jockeys had done their work well – it all performed flawlessly.

Even though everyone loved the idea of a networked radio studio, it took a while for Axia to gain hold. Broadcasters saw the gear, learned how it worked, agreed it was the tech of the future – and then proceeded to install analog plants. Seems that having a vision of the future doesn’t necessarily mean you want to be the first guy to try it!

The first station to try AoIP was WREO-FM, in Ashtabula, Ohio. They had four stations in four different buildings, and they used Axia audio nodes to connect the buildings and share audio – a solution that cost them far less than other, more traditional methods. The industry yawned.

The first station to build a full-fledg 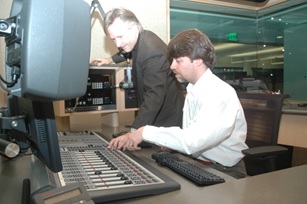 ed AoIP control room was Auburn University’s WEGL-FM. Their chief engineer was ecstatic, and told everybody so. The industry raised an eyebrow.

Then, the first big multiple-studio AoIP installation happened, at New York City’s legendary WOR. Now, broadcasters began to sit up and take notice. The technology they’d all agreed would work in theory was proven to work in reality, too.

Soon, AoIP was popping up everywhere, snowballing across the US and Europe wherever broadcasters sought the economies of scale and the amazing flexibility that only networked-audio could deliver. Places like Minnesota Public Radio, NRJ in Paris, and the gigantic Radio Free Europe/Radio Liberty complex in Prague.

AoIP found its place in more normal surroundings, too, as stations in medium and small markets began taking noticel. AoIP, it seems, delivered so much bang for the buck that stations who thought they’d have to settle for analog found themselves upgrading to networked audio.

Fast forward to 2015: it’s now 13 years since we unleashed AoIP on the broadcast world (Lucky 13!), and thousands of studios around the world (more than 7,000, by our latest count) are using Axia Livewire AoIP to create, share, and send compelling programming to their waiting listeners. So many engineers and talent have seen the benefits of AoIP, in fact, that it’s become increasingly rare to see a new analog or TDM plant commissioned.

So, what’s made AoIP so popular? In a nutshell, three things.

Scalability: In the old days, it took weeks or months of hand-stringing cable pairs from devices to consoles, between studios and TOCs, and then out to other studios, in order to construct a broadcast plant. All of it discrete, one-way circuitry. Sharing audio between studios was limited to a handful of signals; audio routing was a luxury reserved for only the big boys who could afford it.

AoIP blasted the hardwired plant to smithereens. Since its transmission medium is standard Ethernet, it’s simple to share digitized, packetized, full-bandwidth audio in real time — point-to-point or one-to-many; whatever you need. It’s also simple to take any audio source to any console fader, at the press of a button (something we could only dream of in the old days).

Best of all, AoIP scales beautifully. Instead of the massive reworking and investment required when expanding analog or TDM plants, AoIP leverages its computer-networking origins to allow broadcasters to scale up at will, whenever the need arises, simply by adding a new run of CAT-5 and a few audio interfaces. One studio or 20, built all at once or spread out over time – the cost/benefit ratio remains intact. 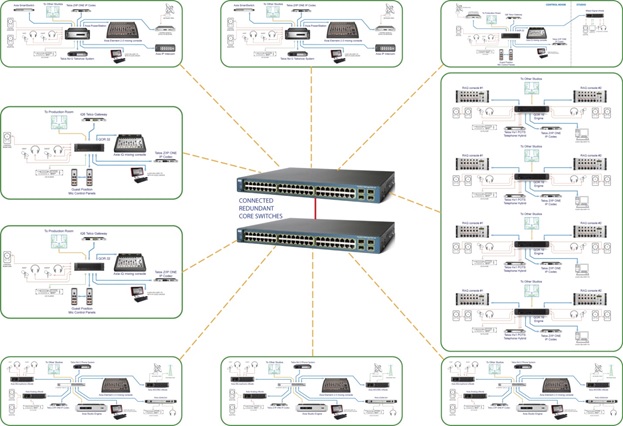 Flexibility. I already mentioned the amazing flexibility gained by something we’ve now begun to take for granted: the ability of AoIP to instantly allow operators to take any source to any console fader at a moment’s notice. But there’s much more than that.

By taking audio into the digital domain, you unlock the ability to control it as never before. Can you run a 20-mic round-table talkshow using an 8-fader analog board? With an AoIP console, you can, by using Virtual Faders to harness the incredible power of a hardened DSP mixing engine. And that’s just the beginning.

With AoIP, you can use inexpensive Ethernet radios to send STL signals. You can utilize fiber-optic media converters to easily share audio between separate floors of a building – or multiple buildings! You can use the digital nature of AoIP to tie intercoms (with broadcast-quality audio) right into the on-air console, and instantly cover breaking news even when there’s no VO studio or adjacent mic to be found.

Not only that, you can reconfigure and re-use AoIP studio gear at will. Need a few more inputs in Studio A? Just rack another Axia xNode and run another CAT-5 cable to your switch or mixing engine. Want to shift some excess input capacity from one studio to another? You can do that too, in about 10 minutes’ time.

Remember studio moves in the analog days? Ripping out wire, terminal strips, leaving high-cost custom cable bundles in the walls because it was too expensive to take it out. With AoIP, you re-use your infrastructure. You can move a studio from Point A to Point B by simply moving the gear — and when you connect it all together in the new location, it will be configured the same as it was before. (Try that with an analog setup!) 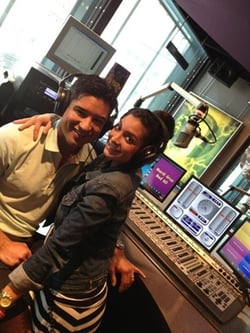 With AoIP, phone systems, remote codecs, intercoms, playout systems, satellite downlinks – virtually any studio device you might think of – is no longer an independent, discrete device. It’s a part of the studio network.

Aside from the benefit of having all of those devices’ I/O connect to the network using just one CAT-5 cable per box, they now interwork. In fact, this is one of the core tenets of The Telos Alliance: Things should work together. Easily.

The days of manual mix-minuses are over; taking a phone caller means pulling up a fader; behind the scenes, the networked phone system and console make the mix-minus automatically and route it back to the caller. Same with traffic reports, remote broadcasts, or news actualities from the field: the contributor gets the customized backfeed they need automatically – which frees up the jock to think about what’s next.

Playout systems can now turn on console faders, adjust levels, and even trigger routing events, without anyone having to initiate manual changes.

Recording a phone call for later play used to require 5-10 button pushes with analog – assigning buses, making a mix-minus, taking the mic out of Program, assigning it to the Record bus, clicking “Record.” With AoIP, it takes just one button press to perform all these tasks.

5.1 audio from the TV side of the house gets automatically downmixed to stereo for use on the radio side.

Talent can load their own customized console layouts with the touch of a button – which includes personalized mic dynamics settings, fader source assignments, and even headphone EQ.

All of this flexibility and customizable workflow means tighter shows and a markedly lower learning curve for operators – and less errors on air means more engaged listeners.

Even transmission gets simplified by AoIP. Program feeds go directly to final processing, which then hooks into AoIP-capable transmitters and Web streaming devices. The result: simplified transmission paths and cleaner, clearer audio.

Any analysis of the state of AoIP has to include some ideas about the future. (After all, there’s a reason the Axia logo is a crystal ball!) So herewith, some thoughts about what might be coming down the pike.

AES67 everywhere. Everybody likes it when all your brands of broadcast gear play nicely together. That’s why Axia made our Livewire AoIP protocol available to everyone who wanted it, since the earliest days (and we still do!). And with the ratification of AES67, a truly brand-agnostic way for gear from different manufacturers to interoperate, we think that the universality of AoIP will advance at an even faster rate than before.

The integration of SIP into AoIP systems. Session Initiation Proto

col, the heart of VoIP, is an extremely useful tool; it allows systems to send messages, status updates, and instructions about how to handle specific audio signals or types of signals. Imagine an AoIP network that is self-checking, self-diagnosing, and self-healing. This is the power of SIP, brought to AoIP networking technology by AES67.

Contact lists. In our computer-aided world, nearly everyone has a contact list: a database of who you know, where they live and how to reach them. When SIP becomes part of the AoIP equation through AES67, networked audio sources and destinations cease to refer to pieces of equipment, and can refer instead to people – people are, after all, the originators of broadcast content. Instead of connecting to a location or a device, AoIP systems can easily, quickly connect to a desired person, regardless of what studio they might be located in. The net effect is that contributions to on-air programming will become easier, and less location-dependent.

That’s my perspective. What’s yours?

Now that you’ve heard my prognostications – why not share your own? What do you think the future holds for AoIP? What capabilities can you imagine, to make your life and work easier? Let us know; email inquiry@TelosAlliance.com. We can’t wait to hear from you!