The Newest Star in the Axia Galaxy | Telos Alliance

The Newest Star in the Axia Galaxy 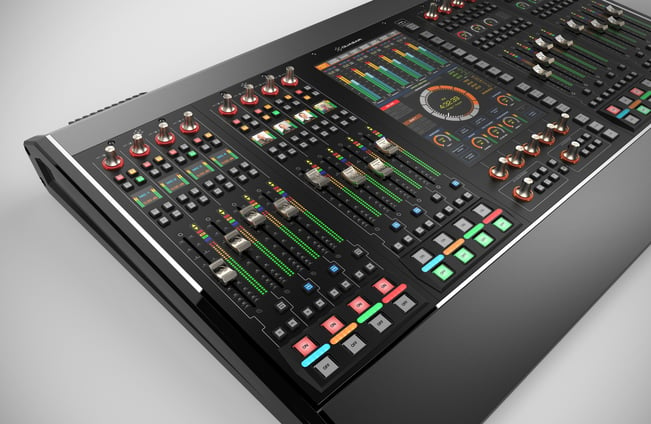 Axia Quasar is all about providing the “ultimate user experience” from a mixing console. What makes Quasar shine?

Quasar is based on a new ergonomic concept that raises the bar of the man-to-machine interaction. We spent a lot of time analyzing the latest market requirements, studying our customer workflows, and talking to system integrators. We introduced the use of touch-sensitive controls for the first time on a radio console to maximize the interaction with the operator. We also developed a new hardware architecture and a new Touchscreen UI, all while keeping the solid foundations of our proven AoIP technology. Finding the right balance of all these ingredients was our challenge in creating the ultimate user experience.

Where did the name “Quasar” come from?

The term quasar, in astronomy, originated as the contraction of a quasi-stellar [star-like] radio source, because quasars were first identified as sources of radio-wave emission. The power and luminosity radiated by quasars are enormous. We were looking for a name that would identify Axia’s latest star as the most powerful radio console we’ve ever made. That’s why we chose "Quasar!"

"All choices we made resulted in a surface that is so responsive that it’s almost impossible to miss a hit..."

Right away, the Quasar looks very sleek. Tell us about its design. 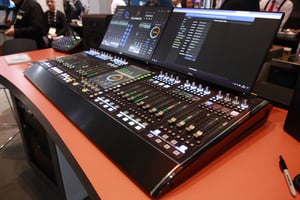 Well, Quasar was designed by a team of people split up between Europe and the United States. We wanted to create a product that was great for both markets, and something that contained the best of both worlds in its DNA. We realized that many digital consoles still inherit some of their physical shape and design from the old analog consoles. Some look like an analog console with a PC Monitor attached. We finally broke this trend by redesigning, from scratch, the control surface, and moving all the crucial control elements close together in order to give the operator better control, visibility, and reach, and minimize possible sources of human error. All choices we made resulted in a surface that is so responsive, that it’s almost impossible to miss a hit when operating it. It was immediately a tremendous hit at IBC this year!

So you don’t need an external display to run it?

No, that was the first thing we wanted to get rid of. All control rooms are, nowadays, based on playout systems that make use of multiple PC monitors. The number of those using touchscreen displays is increasing, and these need to be at close reach for the operator. We noticed that the console display was often moved to the side to leave space for the playout system monitors, and therefore not monitored closely by the operator. This slows down the interaction with the desk, and can lead to mistakes when operating at fast paces. So, we integrated it into the surface. For those concerned with the possibility that an integrated display would be hard to replace in case of damage, we added a thick armored glass and an external HDMI output, just in case.

You mentioned that the Quasar is very customizable. Can you dive a little deeper into the different ways users can tailor it to their needs? 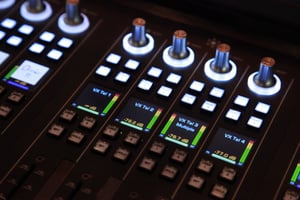 Let’s start from its modular mechanical design: The frame can be installed either table-top or flush-mount, with a single or split-frame configuration. If these requirements change after installation, a conversion kit is available. Power supply units are modular, too, and plenty of redundancy can be built into the system. Quasar will offer different types of hardware modules, that users can position freely within the console frame to meet different workflow preferences. And all fader module’s pushbuttons can be customized directly by the user with a simple web UI. No need for a software engineer to define a custom button! In case complex functions are required, these can be linked to custom Axia Pathfinder logic in order to perform any function.

What does Quasar offer users in the TV market?

Quasar has a native AoIP Engine with 64 stereo input channels, powerful DSP processing on all channels (including an Automixer) and its control surface offers four layers. Its compact design offers a reduced footprint with a lot of power and flexibility.

"We have grown from being a console manufacturer, to being a complete Solution Provider, and that’s why people keep investing in us."

Quasar is the 6th-generation mixing console from Axia. How has Axia grown over the years to become what it is today?

Axia has always been committed to inventing new technologies for the benefit of the broadcast community. Since the creation of the first Audio over IP console back in 2003, we have always invested in experimenting with new technologies, and have worked actively to make them open standards. Also, we always had an open approach, even with our competitors, trying to share rather than hide and 'protect', our technology.

By constantly listening to our customers, exploring the market, and investing in our ideas, we have created a complete ecosystem of AoIP devices that can cover any broadcast application and deliver the best integration between devices available today on the market. We have grown from being a simple console manufacturer, to being a complete Solution Provider, and that’s why people keep investing in us. How would you say Axia Quasar compares to its predecessor, the Fusion?

Quasar owes a lot to the Fusion. It is based on the same proven technology platform, so it is a mature product that extends its predecessor’s capabilities. It is not an experiment based on "a new exciting technology" that may or may not work. Since we had nothing to prove with Quasar, we could concentrate on its design, and on creating the best User Interface and User Experience. I believe the User Experience is what makes it stand out.

Any standout features you think users will really love?

This is difficult to say… Every user has their own approach with a machine, and looks for something different. We tried to make Quasar easy and immediately accessible, even by those who don’t like reading manuals. I think people will instantly recognize and appreciate this effort.

“Finally! A console designed by console users, and not by engineers.”

On the engineering side, were there any challenges or obstacles involved in creating the Quasar?

Lots of complex choices have to be made when you are trying to create the ultimate broadcast mixing machine: mechanical specifications, internal architecture, ergonomic choices. They all impact design complexity and manufacturing costs. Ultimately, customers must be able to afford the product. Even the graphical design of the User interface was the result of a long process where we compared many different views on how it should appear and interact with the user.

In the end, it is almost impossible to make every customer happy. But, we definitely had a great response from the public. One of the best comments I’ve heard so far was from a customer who said “Finally! A console designed by console users, and not by engineers.” Another guy said: ”You managed to make a black console look beautiful. How did you do that?” 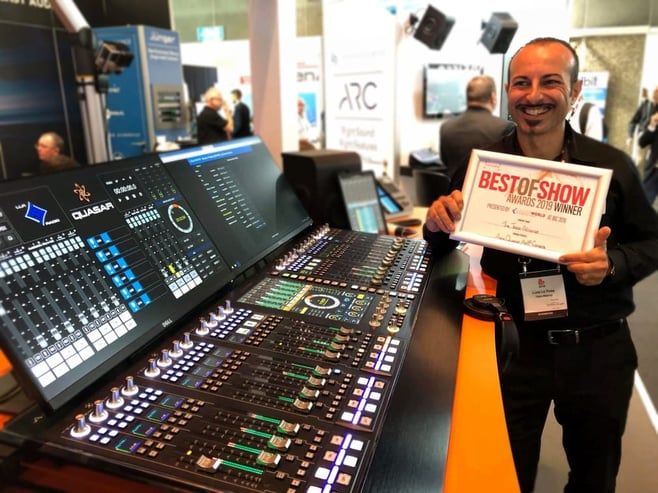 This really does seem like the ultimate mixing experience. What made this all come together so nicely?

I believe it’s the Telos Alliance culture that made this possible. A magical blend of technology mindset, corporate vision, work environment and, above all, people. A bunch of highly skilled broadcast enthusiasts that have a lot of fun with what they do. Our founder, Frank Foti, has a motto: “Make New Mistakes," meaning don't be afraid to take risks to get to the perfect outcome for the customer.

I think it represents our culture perfectly.