Go beyond the numbers with the Axia xNode Matrix Mixer, available now via the latest completely free v2.0 software update. This powerful new feature unlocks endless mixing flexibility and allows broadcast engineers to use their Axia xNodes to create mixes without the need for a dedicated studio mixer / switching system. Here, we caught up with Product Manager Milos Nemcik to get the DL . . .

Krissy: What need does the Matrix Mixer fulfill in the life of a broadcast engineer?

Milos: Playout automation systems typically have three outputs. This goes back to the disk jockey radio days when the workflow of DJs spinning records (and later, CDs) required a few sources that would be cued and ready. Even computers still have three outputs, when they could seamlessly segue between elements with one output! This creates a need to sum the outputs if you ever want to go direct to transmitter—a basic application for which the Matrix Mixer can be used. Any number of sources coming in can be mixed down into one that feeds directly into the transmitter. It doesn’t stop there. We have clients who have had advanced access to the feature and use it to come up with creative solutions for problems they face. 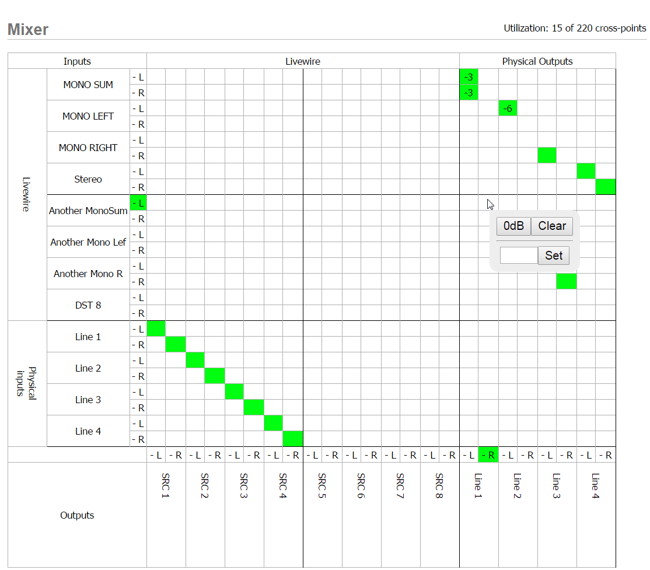 What is different about the xNode Matrix Mixer that you won't find in other virtual mixing features on other devices?

For one, by putting the Matrix Mixer into a discrete xNode, we give the broadcast engineer the ability to move away from traditional studio mixers. What we’ve done with this new version is more than most virtual mixers will do. That's because it's a true Matrix Mixer. We’ve integrated both physical inputs and digital network inputs into the Matrix Mixer so that the xNode is now more than just an AoIP I/O box, but a gateway device that allows for mixing or converting “inputs” to “outputs," where we have expanded the meaning of those two words beyond the traditional sense. For example, three Livewire® streams can be converted into a different stream, like an AES67 stream. Or if you have four AES3 physical inputs made into four AoIP streams, you can then make a sum of the four into a fifth AoIP stream. We give broadcasters the ability to create the mixing they need. It’s so flexible, in fact, that it’s difficult to list all the different possibilities; I think broadcasters will invent utility out of this tool. It gives the power to the user.

"It’s so flexible...it’s difficult to list all the different possibilities; I think broadcasters will invent utility out of this tool."

So ultimately, this Matrix Mixer will make the engineer's life easier?

Yes. It’s another tool for broadcast engineers to have in their bags of tricks. This goes beyond mixing inputs to a single output. All the inputs and outputs are available. You don’t have to limit yourself to inputs that you plug in or just stream inputs to physical outputs. The Matrix Mixer can even mix network streams to create new network streams. It can be used to do so many things, and is not limited to eight inputs. Mathematically, there are 220 points!  Again, the possibilities are astounding. How many different things can you do with a wrench or a screwdriver? If you know the tool well enough, you can use it for anything. The Matrix Mixer is like that.