The guys learned a lot about changes in the industry and some of the challenges faced by radio and TV stations, such as the move to IP Audio and Internet broadcasting. What’s being done to adjust to these changes was the topic of a number of discussions the Fanatics had with engineers throughout the tour.

What a Long Strange Trip it’s Been 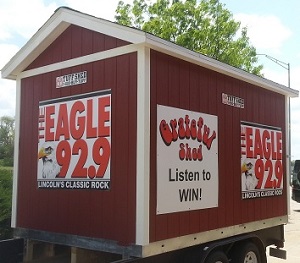 As anyone familiar with the broadcast industry will tell you, if you stick around long enough you’ll see, hear and learn some interesting things. Some of the items that stuck out – and that our industry is known for – were unique giveaways and promotions, such as the ‘Grateful Shed’ seen at one radio station along the way. And then there was that mountain lion story…

But Jared and Andrew were also impressed by the creativity utilized by so many broadcast engineers. “There’s a lot of ingenuity with a lot of engineers, coming up with creative workarounds for problems on limited budgets,” said Jared. Likewise, Andrew pointed out how things such as weather - from hurricanes to desert heat to ice - and diverse geography - from flatlands to valleys and mountain ranges - can cause issues for engineers to contend with.

The most interesting aspect of the engineer fighting nature was how diverse it was around the country, from hurricanes to desert heat to ice.

As you might imagine, a road trip of this magnitude provides ample opportunity to see the sights, and as time allowed, the BAF boys took advantage! Whether it was witnessing feats of engineering creativity and meeting great people, or seeing the Pacific Ocean for the first time and visiting spectacular Zion, Badlands, Crater Lake, Rocky Mountain and Grand Canyon National Parks, there’s so much on this tour Jared and Andrew won’t soon forget.

Check out this great video of the tour!

Broadcast: One Community from Coast to Coast

But perhaps what they came away with most is the feeling of community. “One of the pleasant surprises was how communal broadcasting feels. I really like how it’s not so competitive among the engineers.” The guys added that the folks they met would often refer them to friends in the industry, and were always excited to give their time. Andrew pointed out, “It takes a lot of drive and passion to be an engineer in this business. It certainly takes a lot of dedication for them to do what they do.” 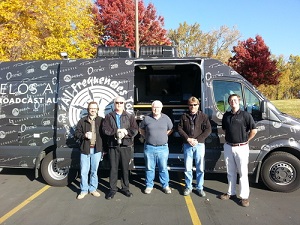 It’s that passion and dedication that the Broadcast Audio Fanatics and The Telos Alliance admire most about the people in broadcasting, and we’re proud to be part of an industry that means so much to so many, serving communities large and small across the country, and beyond.

The weight of that sentiment might only be equaled by the Fanatics’ response when asked if they’re ready to get home… a resounding “Yes!” For despite their dedication to the tour and to promoting the brands of The Telos Alliance, after a year-plus on the road, Andrew and Jared are happy to finally be heading home for some well-deserved rest!

Thanks guys! Glad you enjoyed the tour… We did too!

Read more about the tour on the Broadcast Audio Fanatics' blog!