Choosing an AoIP format for a Broadcast Production Facility with AES67

When talking about Audio-over-IP it is important to stress that we are not discussing something new. In fact, Audio over IP has been a part of the radio broadcast landscape for well over a decade. It was pioneered by the team at US-based Telos, led by the late Steve Church. Called “Livewire,” this AoIP protocol debuted at NAB in 2003. Since the introduction of that first low-latency, contribution-quality format, many other protocols have followed.  However, the sheer amount of choice and conflicting marketing messages associated with each new protocol can be extremely confusing to potential adopters. The true benefits of an IP-based audio system are easily compromised by an inability to choose ‘best-of-breed’ equipment simply because ‘device A’ doesn’t support the protocol adopted by ’device B.’

It is also important to clarify exactly what we mean by AoIP. Unlike Voice over IP (VoIP – more closely associated with communications and telephony), AoIP is uncompressed, low latency, full-bandwidth, program quality audio that is transported across standard Ethernet infrastructure using COTS (commercial off the shelf) IT equipment, such as switches. Signals are typically 48Khz/24 bit with a packet latency of less than 1ms and are indistinguishable from their analog, AES or MADI equivalent. Ideally, an AoIP infrastructure supports both unicast and multicast transport and is synchronised with the house reference using Precision Timing Protocol (PTP aka IEEE1588).

The first true benefit is the use of COTS infrastructure to connect AoIP equipment. The physical connectivity is greatly simplified and resembles an IT system more closely than broadcast. The days of installing ¼-inch patch-bays are numbered, as they aren’t required anymore. The humble XLR connector is relegated to the extremities of the production system, connecting microphones and speakers to devices that convert their signals into Audio over IP. Even these genres of equipment are beginning to transition towards native IP connectivity with the launch of a new breed of IP speakers and the tentative introduction of IP microphones. The number of audio channels that can be transported along a single Ethernet cable depends on the speed of the network and the specific protocol, but Gigabit systems can support hundreds of mono, stereo or surround channel packets on a single copper or fibre cable where at best, MADI supports only 64 monos with AES and analog relegated to stereo or mono respectively.

Providing that the network is managed and administered properly, the use of multicast routing removes the need for frames of distribution amplifiers. Routing is achieved using the aforementioned COTS Ethernet switches that are controlled by appropriate software. This means that you essentially replace traditional routers and matrices completely.

Once you accept the idea that the entire audio infrastructure that you’ve come to know can be replaced by a network that more closely resembles an office IT system, you will be able to understand how the transportation of audio as data represents an evolution with such profound benefits that it can no longer be ignored.

"Once you accept the idea that the entire audio infrastructure that you’ve come to know can be replaced by a network that more closely resembles an office IT system, you will be able to understand how the transportation of audio as data represents an evolution with such profound benefits that it can no longer be ignored."

Back to choosing an appropriate AoIP protocol — which one to pick and why?

Let us suppose that we want our AoIP network to give us, at a minimum, the same capability that we get from a baseband system that currently combines analog, AES and MADI signals. We want the benefits afforded by AoIP; reducing cabling, equipment and cost of ownership, but we cannot compromise our workflow in order to reach that goal. We are also sold on the flexibility that routing packetized audio gives us by using Ethernet switches as routers, but we need to be able change configurations dynamically using a third-party control system to make synchronous routing switches, like most modern broadcasters would expect. This latter requirement limits the choice of protocols because it challenges the popular Audinate Dante, which is controlled using a proprietary application and has less open support for ‘live’ dynamic crosspoint switching using third-party control. Coming from the AV and Pro Audio markets, Dante is a good replacement for MADI in fixed installations where configurations do not change often, but is of limited use in broadcast, aside from the point-to-point transport of bulk mono or stereo audio signals.

Telos Livewire and Ravenna are the two most widely established AoIP standards in broadcast. They are similar in structure and to a large extent it is possible to build systems that coexist using both protocols and to connect audio between equipment supporting either flavor. Many other AoIP and Audio-over-Ethernet protocols exist, but these are almost all resigned to operation within closed networks, supporting equipment interconnectivity limited to their own proprietary formats.

So if proprietary AoIP protocols don’t play together nicely, how do I build an open AoIP system?

The previous statements might seem to consign Audio over IP and Audio over Ethernet to history if products from diverse manufacturers cannot be connected to one another. Fortunately, a solution is at hand. Published in 2013 and gathering considerable momentum, AES67 is a ratified standard for audio-over-IP interoperability. AES67 has now achieved critical mass with fully compliant versions now available from many key technology providers including Telos, QSC and Ravenna and with compatible versions from others, including Dante (Audinate). Forward-thinking equipment manufacturers have embraced AES67. Proof comes from a cursory look at the specifications of an ever-expanding list of professional audio products. This demonstrates that interoperable AoIP is fast becoming a reality within most product sectors, from mixing consoles to intercoms, loudspeakers to processors and at all points in between. The Media Networking Alliance (MNA), which exists to promote AES67, holds regular ‘plug fests’ where manufacturing members and technology providers can test the interoperability of their respective solutions in a non-competitive and non-commercial environment. The results of these forums are published online and make for reassuring reading.

How then does AES67 fit into the emerging world of Video over IP? 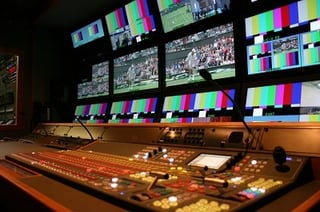 With interoperable AoIP having only recently become reality, you certainly feel a sense of déjà-vu when looking at the challenges facing the video technology community. Perhaps predictably, major manufacturers in the sector have tended to tackle IP video in their own way with a number of companies developing their own schemes or partnering with others to create standards with limited interoperability. As we’ve seen when discussing AoIP, true interoperability demands that every manufacturer joins the bandwagon so no one gets left behind. Fortunately, the rapid emergence of independent broadcast industry consortiums, like the Alliance for IP Media Solutions (AIMS), have taken the manufacturing community to task and worked quickly to establish a common strategy that even companies who seemed set to ‘go it alone’ have signed up.

AIMS mandate is to develop a roadmap based on the open standards established by SMPTE 2022-6, VSF TR-03, VSF TR-04 and to promote their adoption across the TV broadcast industry. Building on the work of independent bodies like SMPTE, VSF, AMWA and the EBU, these standards represent a truly non-proprietary approach that echoes the rationale behind AES67. Perhaps it isn’t entirely surprising then that these closely related IP Video protocols each reference AES67 as the preferred AoIP platform to support audio transport within AVoIP network environments.

In conclusion, as the broadcast community comes to terms with the almost inevitable demise of baseband audio, video, and the emergence of an all-IP future, we can at least be confident that the roadmap is in the hands of independent professional bodies who have our best interests at heart, seeking to reign in the manufacturing community to ensure freedom to choose best-of-breed solutions without compromise.

For more about the television industry's transition to AoIP, read these articles:

Audio Monitoring Within the Transition to AoIP

Harnessing the Full Potential of Audio over IP