Cumulus Radio’s technical collaboration with the Telos Alliance’s Telos Systems and Axia Audio brands has helped put Cumulus on the short list for an IBC2014 Innovation Award, the annual prize given at the IBC in Amsterdam for “clever new technology… in real-world applications.”

The project was an outgrowth of the annual preparations for “Radio Row” at the American Music Awards, presented each Winter in Los Angeles, California. In looking for a more efficient way of dealing with the assembly of 20 separate interview stations (each with its own set of multiple mics and headphones, IFB, audio mixer and other ancillary equipment,” Cumulus Senior Vice President, Engineering and IT Gary Kline, working with Telos Systems VP Kirk Harnack, hit upon the idea of using a “Virtual Mixer” app, written by Cumulus’ Broadcast Software International subsidiary, running on touch-sensitive tablet devices, to eliminate the physical mixing consoles and directly control the mixing capabilities of Axia StudioEngine mixing platforms. Final audio was distributed to local stations using Telos Zephyr iPort codecs, each capable of “pushing” up to 16 stereo MPEG or AAC streams to separate remote locations. 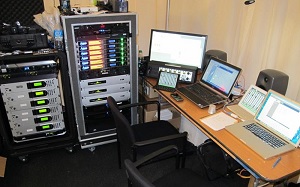 This smart AoIP-based solution saved time, effort and space in numerous ways, and was so successful at the AMA that Cumulus also deployed it for use at the Grammy Awards just weeks later. It proved a cost-effective solution as well - roughly half that of other proposed installations that would have used individual mixing consoles, and consumed hundreds of feet of discrete audio cabling. Since then, the system has also been deployed at the Academy of Country Music (ACM) Awards, and the Billboard Music Awards.

“It’s wonderful to see the promise of AoIP networking being fulfilled, right before our eyes,” says Marty Sacks, Vice President of Axia Audio, the audio-over-IP division of The Telos Alliance. 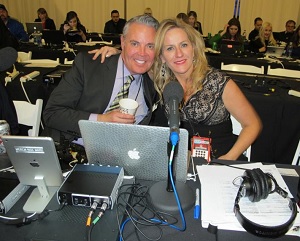 The IBC2014 Awards Ceremony takes place on September 14, 2014, in the Auditorium in the RAI in Amsterdam. To find out more about this year’s Awards nominees, visit www.ibc.org/awards.