Connecting the Land Down Under 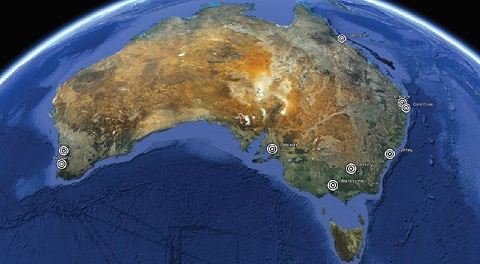 With 78 analogue and 25 digital radio stations distributed across the entire continent, Southern Cross Austereo (SCA) is Australia’s largest commercial radio broadcaster. Each of these stations combines “live and local” programming with networked shows originating from multiple network hubs; often up to four different source cities in any given day.

Yet, for the engineers at SCA, this continent-covering, ever-changing web of content creators and consumers is pretty much “hands off”.  Their work is done.  Now it’s program directors and operations managers who daily publish and subscribe to radio shows, programs, events, sports, and breaking news.  And that’s exactly what National Engineering Manager, Steve Adler, and his team designed and implemented.

Just a few years ago, Southern Cross Austereo had ballooned in size - a result of mergers and buyouts.  Australia’s largest commercial broadcaster found itself with loads of on-air talent, making great radio, but having a difficult time connecting their best shows to other markets reliably.  Sometimes the audio quality wasn’t so great, either, with multiple cascaded codec connections over landlines and multiple satellite hops.  Something had to be done.  Australian radio had to get better - both in dynamic scheduling and audio quality.  An intelligent approach was needed.

That’s when Steve Adler, Matt Steadman, Brett Kelly, and other SCA engineers put their desires and designs together. They presented these ideas to consultants, equipment vendors, and software developers, and gave them a challenge:  Come back with the most advanced and reliable Audio Distribution system available to p

rovide the most reliable delivery of our networked programs to our audiences around the country. Complete N+1 redundancy was required for the entire system to ensure technical stability, and the ability of non-technical staff to drive the system was a core objective.

The result is nothing short of amazing.  It’s called “SCAsat”.  It’s the world’s first audio distribution / contribution network that uses both satellite and wide area network (WAN) delivery simultaneously to feed live audio to its network of stations.

Utilizing the best of both worlds, a single audio-over-IP stream sent via two simultaneous delivery paths ensures that downtime is practically non-existent. Again in a world first, the system is driven using a simple object oriented scheduler that is managed by operational staff, and that interacts directly with the SCAsat equipment to manage the complex on-air schedules for all of SCA’s radio stations.

Now, without daily involving engineers, SCA’s programmers and operations staff can safely and reliably contribute and distribute both regular programs and ad-hoc broadcasts across five time zones, 45 cities, and over 100 radio stations.

How are they doing it?

How is SCAsat combining the best attributes of satellite and terrestrial WAN distribution? How do they allow stations to contribute regular and ad-hoc programs for other stations to put on-air?  And how has this responsive SCAsat network provided business stability and return on investment?

These are big questions with equally big answers. Steve Adler and Matt Steadman sat down with our cameras to explain their SCAsat network, and relate how the ideas they put in place can help other broadcasters as well.

A few months earlier, Steve, Matt, and I presented this in-depth white paper, further explaining the system just as it was being turned on across Australia.