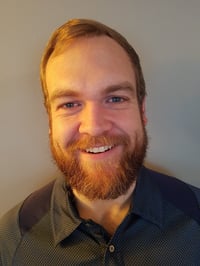 Using IP radios as your STLs has many advantages. One disadvantage though is that they can be more susceptible to rain and snow fade than other STLs.

Using Axia Pathfinder and syslog, I’ve been able to keep my stations on-air, without hearing a dropped packet. Though I am using syslog, the same result can be achieved using SNMP. Even if the IP radio you have is not capable of sending syslog, you can still make this work for you with a little tweaking...

A situation that this does not help is when there is a sudden loss of radio communications. Perhaps someone trips on the power cord to the IP radio. This means Pathfinder does not get a warning from the radio and IP communication is lost before Pathfinder would be able to instruct the switcher at the transmitter site to switch. Fortunately, our BDI switcher has a 45 second silence sensor in it which covers this scenario.

Here’s a step-by-step guide to implementing this trick:

Pathfinder Server’s Axia NIC has 2 IPs; one in Axia subnet, the other in Dragonwave subnet. All static. 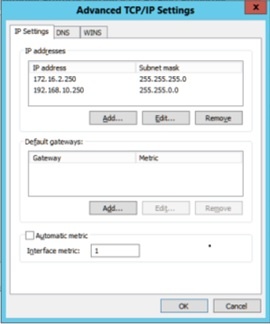 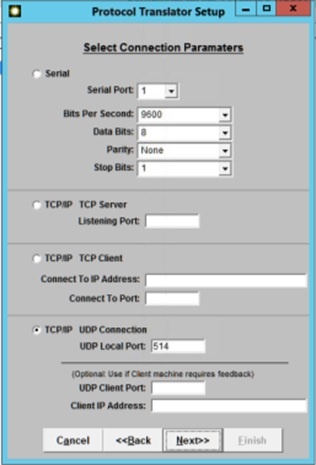 I set mine to use all routers.

In stacking events I’ve built a section just for FM Tower Switchers. The qualifiers are the translator itself and a GPO I built that helps avoid having it jump back and forth too frequently.

It took some wireshark sniffing to get the right command I wanted it to switch on. There are several to choose froms, but I've found the one below to give a good lead time before failure, and it's never actually had a failure on-air. 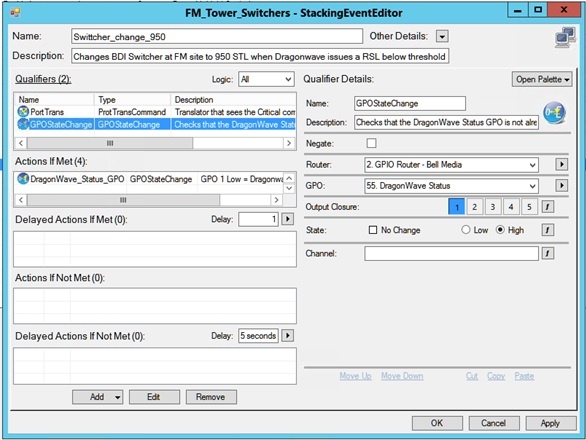 Action 2: Set the GPO of the Multi-Node that is connected to the BDI pin to 1 low, telling BDI to change inputs from A to B.

Returning to Dragonwave is done with 2 different events.

Event 1: When Dragonwave states it’s all clear, wait 10 minutes before changing the “virtual GPO” to High. The command is “Major: RSL below threshold rf1 Alarm cleared.”

Event 2: When the “Virtual GPO” has been set to High for another 10 minutes, switch back.

There is roughly a 20-minute window in this scenario; you can adjust the timeframe to your needs.

First, clear any errors on the BDI, in case it had lost audio at some point, as it will not flip between A/B if in an error condition from loss of audio.This is done via Multi-Node GPO, connected to BDI.

Then Multi-Node GPO tells BDI to switch back to input A.

Emails specific to your local needs will be sent to you as well.