Dubai DJ Gets in Over his Head for Record-Breaking Broadcast 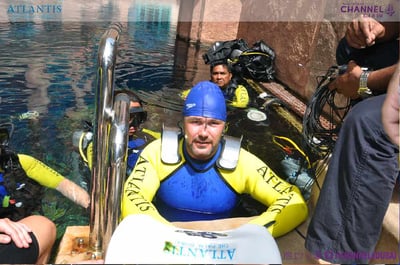 One of the great things about being a broadcaster is that you occasionally have a chance to be involved in some unique broadcasts. But while some broadcasts are memorable for the events they cover, others are so unique that the broadcasters themselves become the story.

Such was the case recently with the crew at Channel 4 FM in Dubai, when the marketing team thought it might be fun to do a live 5-10 minute broadcast segment from the Ambassador's Lagoon outside the iconic Atlantis the Palm Resort, more or less as a publicity stunt to promote the exotic location. We’re not talking poolside, mind you, but broadcasting from within the pool – an underwater broadcast from a pool that hosts a variety of sea life!

This might have been interesting enough, though such an aquatic broadcast had been done before, but the plan soon evolved into something more when Station Producer Lucas Poole (ironic, right?) suggested that Stu Tolan, host of the Celebrate Mornings breakfast show, attempt to break the record for longest underwater broadcast.

Channel 4 learned that this would mean staying on air and underwater for nearly five hours – no small amount of time to broadcast live while wearing scuba gear! The team was up for it, and preparations began to break the record. But would the tech hold up for such a stunt? Channel 4 IT and Broadcast Manager Muhammed Rafeeque says there were a number of challenges, and the engineering team initially didn’t feel prepared for the record-breaking broadcast.

“We were informed that one of the requirements to set the record was that the broadcast crew could not disconnect from the studio for more than two minutes, so we would need to ensure a stable link from the site of the broadcast to the main broadcast studio at all times,” Muhammed explains. In addition, the broadcast hosts would need to remain in communication with a representative from the Guinness Book of World Records, outside the pool, at all times. Muhammed continues, “These requirements presented some challenges for the technical crew to ensure these lines of communication would remain stable throughout the broadcast, and that any delays in communications or getting callers on the air would be minimal.”

Complicating things further, the resort could not provide a stable internet connection because it is reserved for guests, so the only access would be via cables. As such, a good bit of equipment would need to be hauled to the broadcast site so everything would be at the ready.

As a solution, Muhammed says the team used a router, which connected to a Telos Z/IP ONE, and then to the main broadcast studio. The studio features 100% Livewire infrastructure, so getting the audio feed into the studio would be easy using the Z/IP ONE, especially with sufficient backups. Muhammed assigned two Z/IP ONEs to the studio, so if one failed, the second one would take over and the broadcast could remain live. “For this broadcast it was all about convenience, quality, and low latency,” he points out.

“For this broadcast it was all about convenience, quality, and low latency."

All the coordination paid off, and on May 13th, Stu and the Channel 4 Celebrate Mornings went live from underwater! Everything went smoothly, and presenters Saif, Vicky, Helen, and Kolter, Program Director Tom Ferguson, and news reporters on hand to interview the team, joined Stu underwater at various intervals during the show, while co-presenter Eve presented poolside.

With the help of the engineering staff—Ramesh, Chandana, Chaminda, Ibrahim, Mannan, and Shahid Kazmi—and the marketing team of CEO / Group Program Director and AlMurad Group CBO Talal Murad, and assistants Neeil and Yogesh, the broadcast came off without a hitch. 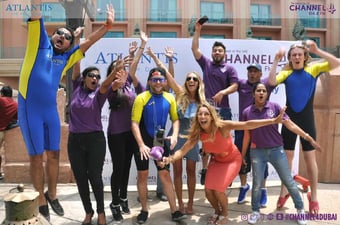 In the end, the record was not only broken, but shattered, as the broadcast went well beyond the five hour mark, giving future underwater broadcast hopefuls a high bar to shoot for. Check out the video highlights and the photo album.

Mr. Abdullah Murad, Chairman Al Murad group, parent company to Channel 4, phoned Stu to congratulate him once the record was officially broken, and the Guinness Book of World Records representative on hand certified the record presented Stu with the honor at the end of the broadcast.

It certainly wasn’t your everyday broadcast, but at a place like Atlantis the Palm, “A World Away from the Everyday” is the norm. The Telos Alliance is proud to have played a small part in this unique event, and help the Channel 4 team achieve a slice of radio broadcast history.