Remember that old Craftsman toolbox in your basement? Some of you may break it out every day or every weekend. For others you have to wipe off the dust and break out the manual when that construction task comes due. Axia has its toolbox too: the PathfinderPC Routing Control system. And after 15 years of projects our toolbox has grown to the audio version of the New Yankee Workshop.

Almost 20 years ago when Axia was still a gleam in the Telos Alliance eye there was a little project started to consolidate a number of differing routing technologies into one contiguous interface. That was the birth of what today is known in broadcast facilities around the world as PathfinderPC. Today it has grown into a suite of applications with the goal of producing a set of tools to get the job done – whatever that job may be.

It is not uncommon for professional carpenters to create their own tools – such as custom jigs. These tools make a master craftsman’s job easier. And it is only through time and experience that these tools are perfected. In the early days of Pathfinder’s development and integration with the Axia product line, we learned that every install is unique and therefore requires some level of customization. At first we answered these needs with a powerful scripting language and designed scripts for our customers to answer these needs in unique and clever ways.

But 15 years of experience at thousands of station facilities has proven that we need to make the customization as easy as possible. The customer has to be able to understand, own, and make changes to their system. Scripting, while powerful in the correct person’s hands, is often beyond the abilities of many customers and can leave new employees at a loss as to how the system works and how to make changes to it. We want our customers to understand and own their systems.

So, like the master carpenter, we started creating tools (our jigs) for making this job easier - then made these tools available as part of the product. Whenever we come up against a new challenge, we ask ourselves if this is something that would be needed by other customers, and then we figure out how to make that functionality available in a simple-to-use fashion. This is how experience grows the toolbox to make any job easy.

The Jig is Up

A discussion of everything PathfinderPC can do is beyond the scope of this article. However we would like to point to a few of the many abilities that make the Pathfinder product unique and indispensable, and a few examples of how some of our customers have used its functionality. 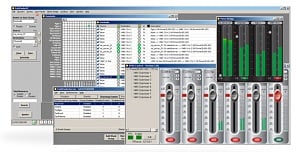 Ever since the advent of the PathfinderPC routing system, we have had the concept of "virtual routers". A virtual router allows the customer to present custom subsets of the inputs and outputs available in a system so a user may be presented with only the IOs that are important to them.

Why is this important? Many customers use this to tie inputs and outputs from different routers together. For example you can create a router that routes both GPIO and audio together. But another good use is for primary and backup signals. You can easily create a router where each crosspoint routes a primary audio signal and a backup signal to the corresponding primary and backup destination.

Another powerful feature in Pathfinder is protocol translators. This allows Pathfinder to talk with automation systems in the language the automation system understands. One of our customers recently built a facility with over 400 AoIP nodes, carefully crafted for redundancy with multiple signal streams for virtually every audio path. They were able to create a virtual router where every source and destination simultaneously makes changes to both the primary and backup audio stream. They then assigned this virtual router to a protocol translator that spoke a common routing language. The automation system could then address this router as if it were any other hardware router.

Coming soon: Part Two of this exploration of Pathfinder, where Dan explains Stack Events and designing your own panels.