Found in the Attic: AC VTVM 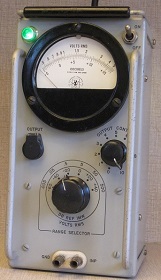 A good AC VTVM is an essential tool for troubleshooting analog audio gear, and was also needed for the annual FCC proof-of-performance measurements back in the day. B&W 410 and HP 403B meters were frequently seen on the bench at many stations, but an equally-impressive but less remembered device was the Navy ME-6D/U. This installment of Found in the Attic recalls this often overlooked AC voltmeter.

The ME-6D/U was first produced in 1955, and was manufactured for about ten years. They were in service by the military into the early 70s. The D/U is the last in the series of */U AC VTVMs, and represented a radically improved design from previous models.

Signals from 15 Hz to 250 Khz can be measured with an accuracy of +/- 3 percent. The measurement range is 500 microvolts to 500 volts. In dB, that equals -65 to +57. The extreme sensitivity is useful for measuring the output of tape heads, phono cartridges and microphones directly, sometimes useful when troubleshooting.

While it is a very basic instrument, one nice feature is the output jack. Insert a 1/4-inch phone plug, and the output of the meter's amplifier is diverted from the meter rectifier to the jack, whose gain can be varied by the output control. The intent of this feature is use of the ME-6 as a high-gain preamplifier that can be connected to an oscilloscope, but it is just as easy to plug in a pair of headphones. This is very helpful when running down sources of noise. Got an RFI problem in an audio circuit? It's easy to listen and 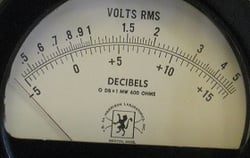 The ME-6 had more robust construction than most of the civilian AC VTVMs of its day. Solid mechanical construction, mil-spec components and easy access to components made it a joy to calibrate and service. MFP (Moisture Fungus Proofing), really a varnish applied to the completed chassis, made measuring socket voltages tedious. Best to scrape it off the terminals and make life easier.

When first purchased, SOP was to measure all the carbon composition resistors, and a few would invariably be way out of tolerance. Particular attention needs to be paid to R 109. This 1.8-ohm resistor sets the feedback level, and if it has increased in value, the meter will not work right. Upon receipt, mine measured 2.7 ohms. Once those and the leaky caps were replaced, it was usually smooth sailing going forward. The service manual was readily available and well-written. Calibration did not require very elaborate equipment.

A logarithmic scale is used for AC voltage measurements, ensuring a uniform percentage of accuracy over the entire scale. The decibel scale reads from -5 to 17 dB. The log scale calibrated in dB is relatively linear. The meter itself is a 'shaded pole' type with suppressed zero indication.

The tube lineup consists of a 5879 input stage followed by two 6AH6 amplifiers, which feed the 6AL5 rectifier. An OA2 voltage regulator provides 150 volts for plate and screen circuits of the first two amplifier stages. 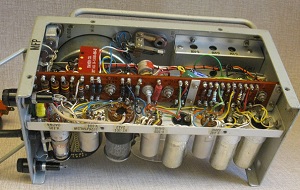 The large amount of feedback in the amplifier ensures stable gain and accurate measurements even with variations in line voltage, tube aging and component aging or replacement. Normal feedback is about 25 dB. Over time, as the tubes age, this figure drops towards zero dB, and frequency response and stability suffer accordingly. Maintenance instructions suggest not operating the meter with a feedback factor of less than 10 dB.

The ME-6 is one of those items that lives on the workbench, rather than in the attic. It's classic, simple design ensures it is still reliable and useful for audio work. It is very stable, and annual calibration checks only require slight adjustments, if any. It was purchased in the mid-70s from Fair Radio Sales, who sold a boatload of these meters as the US military began to surplus them.