Back in the days when radio was powered by analog circuits, noise was usually considered a bad thing. Along with distortion and frequency response, it was measured as part of a station's annual proof-of-performance, and eliminated at every opportunity. But there are times when noise can be put to good use. As a test signal, noise can be used to analyze room acoustics, do a rapid frequency response assessment, and tune up audio processors. Since noise has energy present in all frequencies at all times, it can be used to rapidly assess frequency response.

In the digital age, the techniques of noise analysis are largely forgotten, but this installment of Found in the Attic dusts off an Allison Laboratories Random Noise Source Model 650 and revisits some of the applications for noise in audio analysis.

The 650 is a simple device. A silicon diode is used as the noise source, and it drives a conventional transistor amplifier. The amplifier output feeds four switch-selectable shaping networks. Maximum output is 1.5 volts RMS, with a 3-step, 20 dB per step attenuator and variable gain control. Load impedance is 600 ohms. The 650 was powered by a Burgess XX15, 22 ½-volt battery, or an optional external AC supply. Output noise was monitored on a front-panel meter, which could also be used to check the battery.

Audio testing is typically done with either white noise or pink noise. White noise has equal power per unit

bandwidth, while pink noise has constant power per percent bandwidth.

Pink noise is especially useful for adjusting the spectral balance of audio processors. In fact, the classic Texar Audio Prism (among others) had a built-in pink noise generator for that purpose. This greatly simplified setting up the processor. Adjustments were made using pink noise while measuring the output of the low, mid, presence and high bands with a voltmeter. A reference table in the back of the manual gave recommended values for each of the settings depending on what type of processor the Texar was connected to. AC frequency response varies from meter to meter, and Texar recommended the Simpson 260 or Potomac Instruments AA-51. The manual also notes that the readings from a Simpson 260 and the equivalent Triplett meter, for example, were wildly different from one another.

An external pink noise generator connected in parallel with left and right processor inputs can be used to accurately null a multiband processor. Bridging the left and right outputs with 10K resistors joined together at the far end yields a high-impedance source of L-R signal. It can be monitored with a real-time analyzer (RTA), oscilloscope, or AC voltmeter.

By using one channel of the processor as a reference, and making adjustments to the individual band gains on the other, it should be possible to realize nulls of at least 30 dB on each of the three or four bands. This may take several iterations.

With the spectral mixes accurately balanced, the next step is to do an on-air null using the processor's output gain controls. The L-R signal from the modulation monitor is the best source, as it will indicate issues with the exciter, transmitter and antenna system as well.

In addition to setting up audio processors, noise was also useful for alignment of tape heads in the analog days. A 10 Khz tone was often used for head alignment, but that only indicated the null at one frequency. True, the high frequencies were most critical, but a better picture of overall phase null was obtained with a noise generator or test tape while viewing the results on an oscilloscope.

An exact date cannot be established for this particular 650, but the model appears in the 1964 Allison Laboratories catalog for a list price of $265.00. A rack-mount version, the model 650R was also available.

Allison Laboratories of La Habra, California (not to be confused with Allison Research of Nashville, TN) started in the 1950s. Most of their equipment was used for filtering, signal conditioning and analysis of signals from the sub-audible to low RF range. Their product line included multiple-frequency oscillators, octave band analyzers, 1/3-octave spectrum 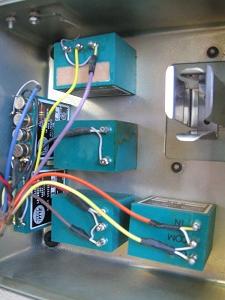 analyzers, and multiple band equalizers. Allison had a global network of sales representatives, and their market seems to have been manufacturing and industrial sound analysis. Some equipment also found its way into electronics research labs in large universities. Little or none was seen on radio station shop benches.

Much of Allison's test equipment was built around welded and encapsulated modules reminiscent of those found in the old CBS Audimax-Volumax limiters. The 650, for example, was built around the 655 Random Noise Source, 671 AC metering system, 659 60 mw amplifier, and three more mystery modules. Other modules from Allison were available for electronic filtering, instrumentation amps and linear RMS rectifiers.

This module concept enabled Allison to easily design custom test equipment for unique needs. Some of the one-offs described in the 1964 catalog included a 48-channel linear rectifier and a 2-channel noise and transmission recorder. The ultimate fate of Allison Laboratories is unknown, but it seems to have dropped out of sight by the early 1970s.

This 650 noise generator was acquired when a college physics lab was cleaning house in preparation for a move to a new building. It was in working condition, and only needed new battery cables to replace the obsolete 22 ½ volt battery with two 9-volt and three AA cells to give the requisite voltage. It’s on the workbench, and still makes field trips to stations for tune up of audio processors and other test applications.