The lowly turntable preamp was one of those things that got no respect at most stations. It was often left in the dark, hanging by the wires inside the turntable pedestal. Stations that would spend a princely sum on a new console, audio processor and transmitter would simply move the old preamp into the new studio. As the drive for better audio quality ratcheted up, that began to change, but slowly.

This installment of Found in the Attic takes us back to the mid-1970s, when some manufacturers began to upscale their turntable preamps with better specs and few extra bells and whistles. In that spirit, we'll peak under the cover of an Ampro TTP-S turntable preamp.

The success of a new product depends as much (if not more) on marketing strategy as it does engineering savvy. The folks at Ampro must have noticed that the market was already saturated with badly made, low-cost, no frills turntable preamps, so they set out to differentiate themselves and build a device with every enhancement possible.

The TTP-S features a front-panel headphone jack, most useful during bench testing for quality checks or during installation, when you're chasing down that last bit of hum. A built-in remote start circuit takes a steady state or momentary contact closure from console or countertop switches, and delivers an isolated NC/NO contact closure, all on a terminal strip around back. This feature saved engineers from the tedium of building an external relay box from scratch, a real blessing when studios had to be built on short notice.

Additional options could be selected from a series of front-panel push buttons. Users could select mono/stereo output and B-channel phase reversal. This last button made it very easy to throw on a test record and adjust one of the outputs for a null, quickly guaranteeing perfect level balance. Four buttons provided various EQ options as a departure from the usual flat response. A low-frequency cut option provided rumble filtering. Mid-frequency boost, HF cut and HF boost permit further tailoring of the frequency response. 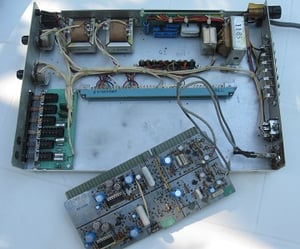 The TTP was built in a solid metal case, typical of Ampro gear of this vintage. It was a definite improvement over the usual sheet aluminum 'hobby boxes' which were commonplace on low-end audio gear. The TTP was rack mountable with the included rack ears, although it seems unlikely that any engineer would want to give the DJs access to all the aforementioned tweaks.

The TTP used the same preamp circuit as Ampro CT-2500 series cart machines of that era. As such, it was on a removable circuit board. This was perhaps the only turntable preamp with that feature.

The advent of affordable op amps is what started the turntable preamp revolution. Before that, most preamps had the same textbook circuit with discrete transistors that had been used for decades. Performance and specs were usually mediocre at best.

In 1975, Ramko Research shook things up when it introduced the SP-8E preamp. The circuit was designed by company president Ramon (Ray) Kohfeld, and was based on the then-new Texas Instruments 4136 quad op amp. Its noise and distortion specs easily ran circles around discrete devices of the time. It was still a very basic no-frills preamp, and this is where Ampro came into the market.

Ampro's circuit design uses a discrete two-transistor preamp with TIS97s. That is followed by a 709C line amp whose output connects to a Class AB complimentary push-pull output stage with 2N3053/2N4037s. From here, the audio goes to an output transformer. The circuit board includes an FET audio mute circuit which was used in the cart machines, but is bypassed for turntable applications. An instruction manual for the TTP has not been located, so its published specs remain unknown.

One of the most reviled features of Ampro audio gear was the wiring. Belden 8640 solid conductor audio cable was used heavily. It had the nasty habit of breaking, usually just inside the outer jacket, with even minimal flexing. This was especially troublesome on the consoles, whose wiring was more prone to flexing and probing. Ampro engineers were quick to point out however, that it was this Belden 8640 that made the relatively small size of its stereo consoles possible. Using more traditional stranded cable such as 8451would have resulted in a much larger wiring harnesses, and hence, a bigger console.

Two Ampro preamps were found in the attic. They came from a Philadelphia station that was cleaning out the engineering closet in the mid-90s. A checkout at the time showed that they were in working condition, albeit with the original electrolytics and other components. Those component date codes suggest that it was manufactured in 1976. While no service manual was available, a schematic, parts list and circuit board layout of the identical cart machine playback amp were obtained. Both preamps were packed away and forgotten until recently. The plan is to rebuild one of them with primo-grade audio components and use it with the vintage sound system in the living room. The Ampro's performance is bound to be much better than that of the preamp in a vintage tuner.