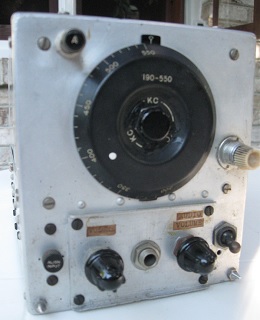 Military communications receivers have always been coveted by short wave listeners and radio amateurs. With rugged construction and great specifications, what's not to love? When this equipment turns up at surplus electronics retailers, it usually comes at a great price.

The downside of surplus gear is that it often has oddball power requirements. If it runs on AC, it is often at 400 hz. Frequently it is powered by non-standard batteries, and the connectors are also specialty items. Before the Internet came along, running down manuals could be difficult. With a bit of work though, these challenges could be overcome, and the user came away with a real treasure.

This installment of Found in the Attic looks at one of the most popular series of military receivers ever – the ARC-5 LF, MF and HF “Command” radios. From the beginning of WW II till the 1950s, the ARC-5 series of receivers and transmitters were the mainstay of military aircraft communications. Our discovery from the Great Upstairs is a member of that proud family, the BC-453-B, which covers the 190-550 Khz frequency band, which has long been used in aircraft for low-frequency radio navigation beacons.

The term “Command” radio has been widely interpreted. Back in the day, it referred to function, rather than a specific type of radio. “Command” meant communications between aircraft, which is in contrast to “Liaison”, which meant communications between aircraft and the base. In practice, the functions sometimes overlapped. And while there were several generations of “Command” sets, the name stuck to the ARC-5 gear. When is the last time you heard someone mention “Liaison” sets?

Between WW II and the Korean War, the production of ARC equipment exceeded demand by several orders of magnitude. Shortly after the Korean war ended, the government began to dispose of its ARC-5 equipment. It was a staple of both surplus electronics stores and mail-order operations such as Fair Radio Sales from the 1950s through the late 70s.

Since they were designed for use in aircraft, all functions are controlled remotely. Tuning was by a flexible bowden cable, although a tuning knob adapter could be attached to the front panel, which had an engraved, calibrated dial. A series of control units were available for the ARC-5s, which mounted in 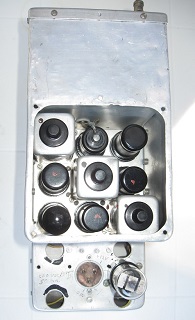 the cockpit. A fighter typically had one transmitter and receiver, while bombers usually had three, which were mounted side-by-side in a special rack unit.

Five tubes were in the lineup: 12SJ7, RF amp; 12SK8, mixer; two 12SK7s, IF stages; 12SQ7, detector and BFO; 12A6, audio output. All power requirements were derived from the aircraft's 26-volt power source. The 12-volt filament supply was connected in series-parallel across the 26 volt supply. Plate voltage came from a dynamotor, really a rotary DC-DC converter, which took in the 26 volts and delivered 250 volts.

The BC-453 has an 85 Khz IF, with three double-tuned, high-Q circuits in the IF strip. By changing the coupling between the primary and secondary windings, the bandwidth could be easily varied. This made the BC-453 very popular with radio amateurs, who used it for phone or CW communications. If one undercouples the IF stages enough, less than 1 Khz bandwidth was possible – ideal for CW communications. By overcoupling, you can get the textbook double-humped response with 3 Khz bandwidth and excellent skirt selectivity, perfect for phone applications.

Most of the amateur applications were not for LF listening, but rather for double conversion reception with more inexpensive single conversion SW receivers. To do this, the BC-453 was tuned to the main receiver's IF frequency, typically 455 Khz. An RF sample was taken from the main receiver right after the mixer or first IF, and connected to the input of the BC-453. Thus, the whole setup was really a double-conversion superhet.

ARC-5 gear was extremely popular with radio amateurs, Countless articles in QST magazine, The Radio Amateur's Handbook, and other ham radio publications described various modifications and tweaks to adapt it to amateur use. This family of gear enjoyed a 30-year run in the amateur community after being retired from military service, and a few are still in use. Not bad for something designed in the 1930s! With the passing of decades and radio amateurs, they have all but disappeared from the modern ham shack. They remain an interesting chapter in the history of radio technology.

The BC-453 was also used in civilian aircraft for its intended purpose, reception of LW radio navigation beacons, all the way into the 1960s. In fact, those beacons are still officially sanctioned by the FAA for aircraft navigation in the United States. As a practical matter, today most commercial and private pilots find their way with GPS and Vortac. When the NDBs (or Non-Directional Beacons in FAA parlance) at airports fail, they are seldom repaired or replaced. Fewer NDB receivers are carried in private aircraft, where instrument panel and cockpit real estate is at a premium. GPS and Vortac function well as main and backup navigation systems. Eventually, the NDB system will probably die of old age, rather than being legislated out of existence. 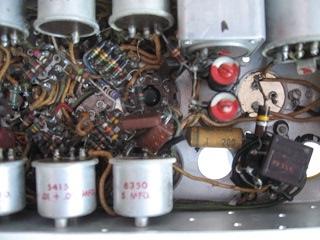 ut by vintage electronics collectors, but there is one important catch. The gear only has value if it is in unmodified condition. Since most of the ARC-5 gear was used by amateurs, who modified it for ham radio bands, that leaves little equipment with the original dynamotors, connectors and hardware intact, hence the high price and value.

This particular BC-453 was acquired in the early 1970s, making it one of the earliest items stashed in the attic. It was a cast off from the local electronics Explorer Post, a popular high school hangout. It came with the pictured modifications. At the time, it seemed like a good bet for DXing long wave broadcasters. Lacking a good ground system or long-wire antenna however, all that was heard was static.

It had about 40 years of accumulated dirt, and received a complete cosmetic cleanup before its photo shoot. The working condition of this BC-453 is unknown. It will become one of the many units on rotating display around the house.