This installment of Found in the Attic examines the Hallicrafters S-20 'Sky Champion' receiver. The 'Sky Champion' line was the company's' mid-priced communications receiver.   Introduced in 1938, the S-20 was replaced by the S-20R in 1939. Since it was in production for less than a year, these receivers are somewhat rare.

Sadly, it’s hard to find an S-20 or S-20R that hasn't had the front panel hacked up, and this example is no exception. A hole has been drilled above the speaker for a headphone jack, which is odd since this receiver already has one. On the plus side, there are S-20s out there that have far more holes and hacks than this one.

The chassis has seen a few modifications too. The power transformer has been replaced, which is fairly common with Hallicrafters receivers. A vintage radio forum post noted that the original transformers were rated just a few mA above normal operating current. Add a few leaky or shorted wax capacitors, and that reserve is quickly maxed out. The speaker is also not the original, and a second audio transformer attached to the speaker frame feeds the additional headphone jack.

Most of the original wax capacitors are still in place. The multi-section electrolytic capacitor was replaced with individual units, probably in the 1950s. Given all of that, plugging this receiver in would probably not be a good idea. A check of several resistors with a DVM revealed that many had gone well out of tolerance.

Schematics and service information for the S-20 are available as a free download from the BAMA web site.

A thorough cleaning removed most of the grime from the S-20. Shafts were cleaned up with Dremel tool and buffing wheel. Unfortunately, the rotating Vernier dial has curled and split in two, a common fate for these fragile indicators with the passing of nearly 80 years. The clear plastic parts have a few warps and wrinkles as well.

Quite a few of these types of cosmetic parts for vintage receivers, such as dials, knobs and decals, are available from Radio Daze. They stock replacement dials for the S-20R, but none for the less common S-20.

As the receiver was disassembled, all the hardware was tossed in a bottle filled with WD-40. It does wonders for removing the rust and dirt. Following this weekend cosmetic cleanup, the S-20 was reassembled and ready for its photo shoot. Electronic restoration will come at a later date.

In 1932, William J. Halligan founded the Hallicrafters Company. A lifetime radio amateur, Halligan had been involved in radio parts sales for years. He finally decided it was time to start his own company, devoted to his passion of building handcrafted receivers at an affordable price point. The company name is a contraction of Halli(gan) and (Hand)crafters. It was a gutsy move. The new company had very little capital, and the country was in the midst of the Great Depression. 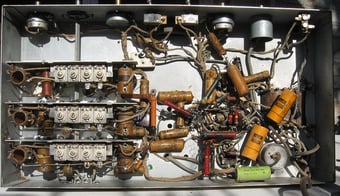 Shortly after opening its doors at 417 State Street in Chicago, Hallicrafters faced its first challenge. RCA wanted to sue the new manufacturer for building radio sets without paying licensing fees. Hallicrafters was able to purchase the smaller radio manufacturer Silver-Marshall, Inc., which had the requisite patent license from RCA. Problem solved.

During the early years, Hallicrafters private-labelled receivers for other manufacturers in order to pay the bills. In 1935, they struck out on their own with the SX-9 'Super Skyrider'. The rest, as they say, is history. The concept of affordable handcrafted receivers took off, and by 1938, Hallicrafters was one of the top three manufacturers of amateur receivers, along with National and Hammerlund. In addition to domestic sales, Hallicrafters gear was sold in 89 countries.

The product line expanded from receivers to transceivers and in 1938, amateur transmitters, beginning with the HT-1. But the runaway success with amateur equipment had to take a back seat to higher priorities with the outbreak of WWII.

The U.S. military was woefully short of radio gear, and all electronics manufacturers quickly converted from their usual products to wartime materials. Hallicrafters was involved in many government contracts, but the best known was probably the HT-4/BC-610, along with related components in the SCR-299 mobile communications unit.

Hallicrafters rode the post-war economic boom to even greater success. The period from 1945-1963 was probably the company's golden age. Some of the classic designs from that period include the SX-42, S-38, and SX-88. The company also began producing consumer electronics equipment, including radio phonographs, televisions, clock radios and AM-FM receivers.

Manufacturing facilities had expanded during the war years, and this continued through the 1950s. By then, the company's main plant was a block long. Another building 3 blocks away had an additional 72,000 square feet. On Chicago's north side was the 12,000 square foot coil plant. There was an additional 150,000 square feet of production and storage space in three other buildings within a five-mile radius of the main plant. At its peak, Hallicrafters had 2,500 employees.

The 1960s were a period of turmoil for the US electronics industry. The escalating war in Vietnam led to an increasing number of government contracts for military communications. This caused many companies to abandon consumer electronics completely for greener pastures. At the same time, the market was beginning to be flooded by inexpensive Japanese imports.

Bill Halligan had wanted to retire and move on in the early 1960s, but initial deals to sell the company fell through. Finally, in 196

Hallicrafters equipment is regularly sought out and restored by collectors. Gear is often seen on eBay and at ham fests. Some of it is still in use by amateurs and SWLs who use vintage gear.

This particular S-20 was found curbside during a spring cleanup in the late 1980s. Judging from the amount of rust on the chassis and hardware, it must have spent considerable time in a damp basement. It was packed away in the attic and soon forgotten as ongoing projects were more pressing. Now that it has had a cosmetic facelift, it will be put on display.