Heathkit equipment has consistently proven that you don't need to spend a lot of money to get reasonable test gear. This Found in the Attic feature, the SG-8 RF signal generator, is no exception. It was introduced by Heath in September of 1953, and sold for $19.50. Production continued through May of 1961. Despite the low cost, the stability and accuracy of this RF generator is pretty impressive.

The circuitry is simplicity in itself. The RF section consists of a single 12AU7. One triode section is a Colpitts oscillator, while the other is a buffer between the oscillator and output section. Four coils, for bands A-D, are switched via the band switch. The coil for band E, which covers 25-110 Mhz is really a section of bus bar wire.  Additionally, useful calibrated harmonics are available up to 220 Mhz.

The audio oscillator is also a Colpitts circuit, in this case, a 6C4, having a frequency of approximately 400 Hz. It is fed both to the RF section of the SG-8 and to the OUT connector, making it available for testing audio amplifiers, etc. With the modulation switch in the EXT position, an audio oscillator may be connected to the SG-8. In that case, the 6C4 becomes an amplifier for the external signal.

The power supply provides filament voltage to the 6C4 and 12AU7. A selenium rectifier is connected to one side of the transformer as a half-wave rectifier. RC filtering is provided by two 20 µF electrolytic capacitors separated by a 3.3K resistor.

Both sides of the power line are bypassed with .01 uF disc capacitors to discourage RF energy from feeding back into the power lines.

There are no tweaks in the SG-8. What you see is what you get. The instructions claim that this is because all the coils have been pre-adjusted at the factory.

The most common application for the SG-8 is receiver alignment. With some practice, specific alignment instructions are no longer necessary. Superhets are superhets, and IF stages are always aligned first, followed by high frequency oscillator trimmer at the highest frequency, usually 1600 Khz. Then set the oscillator and receiver for 1400 and adjust the RF trimmer for a peak output. Finally, set the RF oscillator to 600 Khz, and tune the receiver to the low end of the dial. Rock the receiver tuning capacitor while adjusting the trimmer for maximum output.

For multi-band receivers, the procedure is essentially the same. After the IF stages are tweaked, each RF band is aligned, starting with the highest and working towards the lowest.

This SG-8 was a gift from a friend whose father had been an electronics hobbyist. It had been sitting for several years in a garage, b 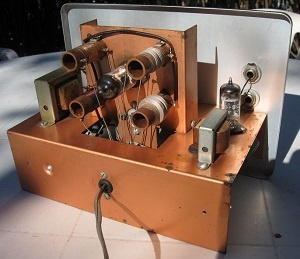 ut seemed to have received little use. The assembly of some Heathkits is scary, but this one was very well put together. For better RF integrity, the entire chassis is copper plated, and some connections are made with bus bar wire.

It was given a thorough cleaning, tube check, De-Oxit on pots and switch contacts, and had electrolytics replaced. Manuals are readily available online as PDF downloads. With service information in hand, tube socket voltages were measured. The readings for cathode and grid voltages was a bit wonky, but after replacing a few out-of-tolerance resistors, everything fell into place. Checking dial calibration with a frequency counter revealed that at its worst, accuracy was around 5 percent. The manual states an accuracy of 2 to 3 percent. Perhaps more work needs to be done here. This is not exactly laboratory precision, but good enough for receiver alignment and hobbyist experimentation.

When restoring an SG-8, its best not to just wholesale all the caps. The electrolytics and RF bypass across the power line, yes. Those little white tubular caps in the oscillator are selected for temperature compensation and frequency stability, and best left alone. They seldom fail.

This little RF signal generator spends part of its time on a bookshelf display, and part on the workbench, as the main RF generator is having some issues at the moment.