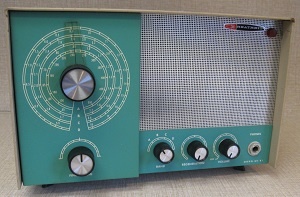 An ancient Chinese proverb says, “The longest journey begins with the first step.” And so it is with building Heathkits. Over the years, I've assembled countless Heathkit projects, most for personal use, some for the electronics workbench at college media centers and radio stations, and a few as gifts. But you never forget your very first one. When I made my most recent trip to the attic, I came down with numero uno, my first electronics kit, a Heath GR-81 economy short wave radio. This three-tube, four-band receiver covered 140 Khz to 18 Mhz. The GR-81 had a long production run, from 1961-1972. List price in the 1967 catalog was $23.50. The estimated time for completion was about six hours.

The GR-81 was definitely a beginner's kit. But true to form, Heath found a way to add value to it. A conventional superhet short wave radio designed for low parts count and low cost would most definitely have lackluster performance. But if the radio had a regenerative detector, well, that would go a long way towards increasing its sensitivity, far beyond that of an inexpensive superhet. Similar circuits were used in Allied Knight and Lafayette kits. The GR-81 was a bit nicer because it had a power transformer, line fuse and filter choke, components that were often eliminated in economy kits. The metal chassis was also pretty solid.  With a bit of patience and practice with the regeneration control, performance of this inexpensive receiver could be pretty impressive.

The regenerative receiver had its origins in the earliest days of radio. It was invented in 1912 and patented in 1914 by Edwin Armstrong, who is perhaps better known as the father of FM broadcasting. Armstrong developed the circuit while an undergraduate at Columbia University. It was based on the relatively simple principle of positive feedback. Regenerative receivers were popular from 1914 through the beginning of WW II. It was the right circuit at the right time, since it had a low parts count at a time when vacuum tubes and many components were still quite expensive.

Regeneration was not without its problems, most notably the fact that it radiated interfering signals. Gradually, other receiver designs came along, such as TRF and superheterodyne, and the regenerative radio faded into electronics history, save for a few revivals by Heath and other electronics kit companies in the 1960s. The principle of positive feedback lives on in the form of oscillators and active filters.

The GR-81 had three tubes, a 35W4 rectifier, 50C5 audio output, and 12AT7 detector/audio amplifier. The power supply was conventional, with a couple quirks. The filaments of the three tubes were wired in series, so if one went out, they all went out. The neon power indicator ran off the B+, so it would not light until high voltage was present.

The RF section had four coils, one for each band. Since this is not a superheterodyne circuit, there are no IF transformers, and thus, no alignment is necessary after assembly of the receiver is complete. Tuning accuracy depended on the tolerance of those coils. Dial calibration was OK, and pretty much 'what you see is what you get'; since there were no tweaks to tune it up anyways.

The audio output circuit has a headphone amp, and when phones are inserted, they're in series with the 8-ohm speaker. The assumption is that these would be high-impedance headphones, in which case virtually all of the power will go to the headphones, and none to the speaker. Presumably, 8-ohm phones or an external speaker would result in about a 50-50 division of power between the receiver's internal speaker and these external devices.

Operation of the GR-81 depends on what type of signal you want to listen to. In all instances, sensitivity of the detector is quite low when the REGEN control is fully counterclockwise, and increases to extremely sensitive as you approach fully clockwise. Sensitivity is at its maximum just before the circuit goes into oscillation, and this is how you listen to AM signals. For CW and SSB signals you advance the REGEN control until the circuit begins to oscillate, and the control effectively becomes a BFO as well.

This GR-81 was a Christmas present in 1968. Despite my best efforts at careful assembly, it did not work when first plugged in. When my father looked it over, he spotted four or five cold solder joints. Once those were reheated and solder reflowed, the GR-81 sprang to life. Voltage checks with my trusty Eico pocket VOM indicated everything was within spec. With an alligator clip on the antenna terminal, local AM stations could easily be heard.

The next step was an outdoor antenna. A 70-foot length of hard-drawn copper wire was strung from the upstairs back porch to the garage. Once this was connected to the GR-81, all four bands came alive. After I got comfortable with the regeneration control, it was a great receiver for DXing.

It wasn't long though, before I was given a Hallicrafters SX-32 in non-working condition. Once it was fixed up, the GR-81 fell into disuse, and was eventually packed away for a few decades. 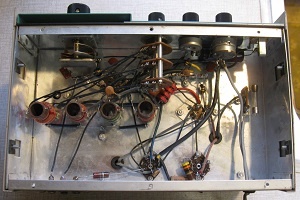 Since it was sealed in a plastic bag and packed in a box, this GR-81 survived its hibernation period fairly well. Some moisture had gotten in, as there was a mild amount of oxidation on some of the sheet aluminum parts. It was given a quick cosmetic clean up prior to its photo shoot. Tubes were checked and found to be OK, and all pots and the bandswitch were given a thorough going over with DeOxit.

Sadly, my GR-81 refused to operate when powered up, only emitting a loud hum from the speaker. Fortunately, I still have the manual and schematic, marked up with voltage readings taken after it was built. And since I am the one who put it together, I know that it is wired properly and did work well at one time.

The next steps are replacing the electrolytics along with C8, the single black beauty cap. After that, a voltage check should shake out the problem(s) pretty quickly.