Found in the Attic: HP 403B AC Voltmeter 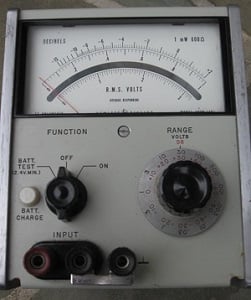 Back in the days when analog broadcast gear was the norm, every radio and TV station was required by the FCC to perform annual proof-of-performance measurements. That meant every engineer’s work bench had to be equipped with certain tools – namely an audio signal generator and distortion analyzer.

One of the more common of these was the HP 403B AC voltmeter. We discovered a rather distressed 403B on a recent trip to the attic.

The HP 403B AC was the first solid-state AC voltmeter offered by HP. Released in 1962, it had a response of 5 Hz to 2 Mhz from 1 mV to 300 volts (-72dBm to +52 dBm) in a 1, 3, 10 sequence. Accuracy was specified as +/- 2% from 10 Hz to 1 Mhz, but with one important caveat; the 403B had an averaging detector, or “RMS calibrated average responding” detector, as the literature of the day described it. This meant the meter was only accurate when measuring pure sinewaves. It wasn't until around 1980 that true RMS detectors began to be incorporated into AC voltmeters. Previously, this technology was expensive and difficult to implement in real circuits.

Your 'average' piece of equipment

Averaging detectors deliver a DC output that is proportional to the average value of the rectified input signal. The meter was calibrated to display the same value as a true RMS meter when measuring a pure sinewave signal. When measuring noise with an averaging AC voltmeter, it's important to remember that the results will be 1 or 2 dB lower than readings taken with a true RMS meter.

Power came from a 26-volt bipolar supply which was made up of four 6.5v, 225 mAh Ni-Cad cells. The 403B had an internal battery charger that ran off line voltage. With good batteries, 40-hour operation between recharges was the norm, and HP specified 500 recharging cycles. 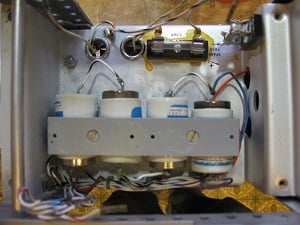 This 403 was purchased 'as is' from a surplus dealer. It suffered badly at the hands of its prior military owners. Every TI mil spec transistor on the board had apparently been blown and subsequently replaced with several different types of generics. Other components had been replaced too. Cold solder joints were everywhere – not a good sign in a precision test instrument.

Far worse, the unit had been stored for a considerable time with dying NiCad batteries, causing a nasty chain of events to occur. The inside of the unit – both metal and plastic parts – was covered with white potassium carbonate crystals, produced when the potassium hydroxide from the battery reacted with CO2 from the air. When the CO2 in the enclosure was exhausted, the potassium hydroxide attacked the metal and plastic, and the moisture from this reaction and the electrical current from the dying batteries caused an electrolytic reaction.

What we ended up with was corrosion all over the circuit board, especially on solder joints. This type of corrosion is tremendously frustrating to deal with because when it mixes with solder, it makes the contaminated solder difficult to melt or remove. Because gaseous potassium hydroxide can penetrate just about anywhere, corrosion can appear inside insulated wires, and even inside transistors that are not in hermetically sealed cases. No worries, though. How much fun would it be if all restoration projects were easy?

What to do? First, document

everything with a digital camera. Next, a complete disassembly and immersion in a vinegar bath is in order. Follow that with a prolonged soak in water to remove what's left. Now the real cleanup begins. Carefully filing solder connections with a jeweler's file will bring up enough clean surface that they can be successfully heated, melted and vacuumed away.

Currently, work has been completed on the main and power supply circuit boards, all corrosion has been removed, and electrolytic capacitors replaced. The project is awaiting replacement transistors, as well as the design of a suitable battery power supply with replacements for the original NiCads.

For some pieces of equipment that live in the attic, the journey back to health can be long and tedious.