Found in the Attic: OS-8/U Oscilloscope

From the time that oscilloscopes were first developed in the early 1940s, the race was on to make them smaller. Originally, scopes were esoteric devices found only in research labs, but servicing applications quickly surfaced. They eventually began to appear in radio-TV repair shops.

Due to their large size and somewhat fragile construction, taking oscilloscopes out in the field was avoided. Any equipment that needed regular tweaks with a scope was made portable and modular so it could be taken to the shop. As the technology advanced and equipment became more complicated, that was no longer practical. One of the first portable scopes was developed for the U.S. Navy in the early 1950s. The OS-8/U was no larger than a shoebox, but provided all the basic oscilloscope functions, with a vertical bandwidth of about 2 Mhz. Most of the OS-8s were manufactured by Carol Electronics Corp. of Martinsville, WV. A smaller number were made by Hickok in Cleveland, OH.

In this installment of Found in the Attic, we take the covers off the OS-8/U, and marvel at how so much stuff could be packed in such a small space using point-to-point wiring. We'll also offer some thoughts on the care and feeding of these vintage devices.

The OS-8 is modular in design. Most of the controls are on the top, grouped on four separate modules, horizontal amp, vertical amp, sweep circuit osc. and sync circuit. Just because this scope is modular doesn't mean the modules come out. All are on wiring harnesses, which are long enough to lay each module on its side next to the scope. The picture illustrates the OS-8 completely disassembled. Working on the modules is actually not that difficult. The bad news is that you need to remove 28 screws to reach this level of disassembly. 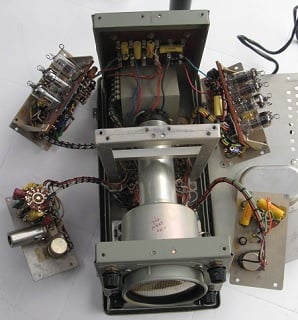 becoming hard to find, and expensive when you do. Richardson Electronics usually has them in stock, and they also show up on eBay.

While it is a reliable device, many of the problems that do crop up with the OS-8 are heat related. One of the most common is that the trace will not hold centering when adjusting the horizontal or vertical gain. In extreme cases, the trace can't be centered at all. You might think it's a DC balance issue, but usually it's not. With excessive heat, the 12AT7s in the horizontal and vertical amps can become gassy. They'll usually test OK for transconductance, but fail the gas test miserably. Substituting new ones and doing the DC balance adjustment usually cures the problem.

If you've acquired an OS-8 and didn't get a manual, don't worry. Copies are available for free download from the BAMA web site.

The OS-8 is great if you want to just poke around a piece of equipment and look at waveforms, but if you need to accurately measure peak-to-peak voltages or check timing, forget about it. There is an attenuator ahead of the vertical amplifier, but it isn't exactly precision. And this oscilloscope has a repetitive sweep circuit. Today, we take calibrated sweep and triggered time bases for granted, but when the OS-8 was designed, they didn't exist.

A repetitive sweep circuit is basically a sawtooth generator that may be synchronized to either line frequency, internal or external sources. As such, it can only lock up on signals having a frequency which is a multiple of the sweep frequency. That means you can spend a lot of time readjusting the 'locking', or sweep frequency control in order to get a stable display.

Since it cannot be calibrated in in sweep time, a repetitive sweep circuit is not a true time base, and timing measurements cannot be made. Repetitive sweep scopes were quite common in the low end of the market throughout the 1960s, and most of the early Heathkit scopes were of this type.

A historical footnote to this discussion is that the first true calibrated sweep circuit was in the Tektronix 315, introduced in the mid 1950s. And if you wanted a calibrated vertical amp and time base in a portable scope, you had to wait till the early 1960s, when Tektronix introduced the 310.

By the 1970s, the OS-8 was probably not anyone's first choice for a bench oscilloscope. Its greatest advantage was its low cost through surplus outlets such as Fair Radio Sales. With a good knowledge of basic electronic circuits, it was also easy to repair, and parts were readily available.

Back in the days when broadcast audio circuits ran on analog, part of the annual maintenance at the beginning of each semester was lining up the studio gear audio levels with tone and setting up the audio processor. The next step 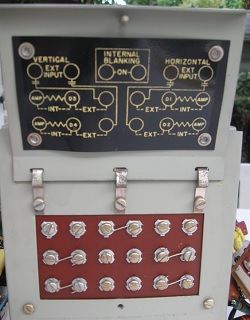 was to put on some music and head out into the field to set the modulation level on the transmitters.

A typical college station had about a dozen transmitters. Large university stations could have many more. These were usually located close to the AC switchgear in boiler rooms, which were always cramped, dark, dirty, and at a constant temperature of around 90 degrees.

The OS-8 easily fit in the close quarters where transmitters were installed. An alligator cliplead connected to the vertical input was all that was needed to get enough signal to set modulation levels. The trace was easy to see in the near darkness. And if the OS-8 got dropped, lost or stolen, well, it wasn't the end of the world.

Although no longer attractive for bench work, OS-8s occasionally turn up at surplus outlets, and regularly on eBay. They are popular with radio amateurs, who use them for continuous monitoring of AM modulation levels. Vintage test equipment buffs also collect them.

The OS-8E/U pictured in this article was used almost exclusively for carrier current work. It was purchased in the early 1970s from Fair Radio Sales for about $40. It has made countless trips to boiler rooms, utility closets, laundry rooms, and anywhere else carrier current transmitters were located. With an occasional check of tubes and calibration, it gave sterling service for about 20 years. It was finally retired in the early 1990s, when carrier current finally disappeared from the campus media landscape. Today, after 20 years in a hot attic, it still works and is in good cosmetic condition. These days, it is best classified as an art object, and slated for rotating display around the house along with many other art objects.