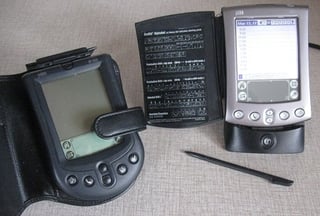 2016 marked the 20th anniversary of the release of the Palm Pilot, the first commercially successful PDA, or Personal Digital Assistant. The event passed without much fanfare or recognition. What little there was probably got drowned out by press on the latest iPhone, Google Android or BlackBerry. But the truth is, these devices owe a lot of their conceptual identity to that landmark device that hit the streets in the mid-1990s. This Found in the Attic explores the history of PDAs, the Palm company and the PalmPilots m100 and m515. PDAs are a subset of the larger personal electronics revolution, which began in the 1970s.

The consumer electronics landscape was very different just 20 short years ago. Sure there were cellphones, but they were expensive, and almost as big as Vietnam war surplus walkie talkies. About all you could do with them was talk to someone. The PC war between Microsoft and Mac was near its peak, but both platforms were large desktop devices. Laptops were like small pieces of luggage, and a lot heavier due to all those batteries. They were approaching the point of true usefulness, but not quite there yet. Too bad there isn't some way to put a bit of that computing power in your pocket and take it with you. The stage was set for a revolution.

Computer pioneer Alan Kay was the first to describe the concept of a personal digital assistant in the 1970s while a graduate student at the University of Utah. His 'Dynabook' envisioned a flat-panel display and a wireless connection with the outside world. It would take technology another 30 years to completely catch up with Kay's vision.

The real work on what would be known as PDAs began in the early 1980s. Back then, business leaders depended on Day-Timers and various week-at-a-glance calendars in order to organize contact info, appointments and important dates. With the PC revolution well underway, visionaries began to imagine taking the concept of the paper-based Day-Timers into a portable, electronic format.

Credit for releasing the first personal digital assistant usually goes to the London-based company Psion, who in 1984, released the Psion Organizer. It was marketed as 'the world's first practical pocket computer'. The Organizer came with a clock, calculator and simple flat-file database. There was no operating system.

Psion followed up in 1986 with the release of Organizer II, which has several hardware enhancements, an enhanced keyboard and display, larger ROM and either 8 Kb or 16 Kb of battery-backed RAM. It also included a robust single-tasking operating system. 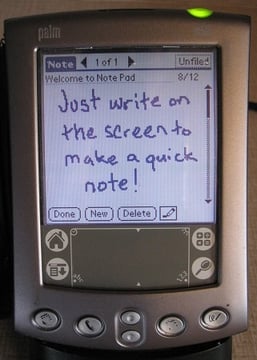 In 1993 Apple, entered the market with the Newton, which ran a proprietary operating system, Newton OS. User input was primarily via handwriting, which was heralded as very innovative for the time. Unfortunately, Newton had been rushed into production before the handwriting recognition software was fully developed. That, coupled with its high price led to lackluster sales. The second generation handwriting recognition software was much improved, but it was too little too late, and the Palm Pilot edged ahead in sales when it was introduced in 1996. Newton was cancelled by Steve Jobs in 1997.

An interesting footnote to Newton is that it was the first device to actually be called a Personal Digital Assistant. That term was first coined by Apple CEO John Scully, who also spearheaded the Newton's development. Apple apparently neglected to patent the term, because it wasn't long before it became a generic description for small handheld computing devices, most notably Newton's arch rival the PalmPilot.

The history of Palm Computing Inc. was a wild ride, almost from the start. Founded in 1992 by Jeff Hawkins, company leadership consisted of Claris cofounder Donna Dublinsky as President and COO and Ed Colligan.

Development costs for the premiere PalmPilot pretty well exhausted the startup capital, and the company was left with little reserves for production and product rollout. Palm sold out to U.S.  Robotics in 1995 for $44 million. It was the first of many ownership and leadership changes. The infusion of cash enabled Palm to release the Palm Pilot 1000 in 1996. It sold for $299, and came with 128K of memory and a monochrome touchscreen display. It's futuristic, sleek design was apparently no accident. Rumor has it that that the shape was developed when Hawkins carved a block of wood and carried it around with him. He just kept carving and smoothing until he had a shape that felt good. The technology inside the sleek shape was advanced too. Compared to the Newton, Palm was much better with handwriting recognition and also had a sleek GUI.

Part of the improvement with handwriting on the Palm came from a different approach to the problem. Apple's Newton tried to learn the user's handwriting. Palm created a simple script with a prescribed order and direction for some strokes, not unlike learning to print in grade school. Doing this virtually eliminated a lot of the odd quirks in individuals' handwriting that could lead to errors. Palm called it Graffiti, and one of the illustrations shows the guide to this script printed on the inside cover of the m515.

Just one year after the original Palm made its debut, 3Com acquired U.S. Robotics in 1997. The new owners invested heavily in Palm, and launched the annual PalmPilot Developers Conference in San Francisco. Palm soon went through an explosive growth period, eventually accounting for ten percent of 3Com's annual sales. Plans were developed to spin off Palm as an independent company, but it was too late. In 1998, Hawkins, Dubinsky and Colligan left 3Com to found a new company - Handspring, which design and manufacture its own PDAs using Palm's software. This turned out to be a critical junction in the history of the company. In 2000, 3Com's plans are finally realized, and Palm goes public.

1998 was also a year of litigation. 3Com was sued by Pilot Pen Corp. The suit claimed that the two companies might be confused with one another. The idea that an office pen might be confused with a personal digital assistant seems absurd, but the lawyers prevailed, and the word 'Pilot' could no longer be used in the branding of Palm products.

Later that same year, 3Com in turned sued Microsoft, claiming that company's Palm PC brand could be confused with Palm's products. This time, 3Com was on the winning side of the legal battle, and Microsoft had to say 'Palm-size PC', but later changed the name of its portable PCs to 'Pocket PC'.

In 1999, Palm made a quantum leap with the technology by introducing the first PDA to have wireless internet access, the Palm VII, which sold for $599.  In order to facilitate that, the company also became an Internet Service Provider when it launched PalmNet. The service provided unlimited service in most metropolitan areas.

Palm released two more PDAs in 2005, the budget Palm Z22, which sold for around $99, and the high-end Palm TX, which was in production till 2009. By this time, a fork had appeared in the road. The branch labeled PDA was headed for extinction, while the one with the 'smartphones' sign seemed to go on forever. Palm had seen that sign, and got on the on ramp to the smartphone superhighway with the release of the Treo.

For reasons which are still unclear, the Treo was released with Windows Mobile rather than Palm OS. After a few generations of Palm hardware and Windows software, in June 2009, Palm released the Pre smartphone with webOS, a new operating system developed by Palm. That was soon followed by the Pixi, which at the time of its release in 2009, was the smallest smartphone on the market.

In 2010, another owner came into the picture when HP acquired Palm. The new owners saw great potential in the webOS software. They soon began rebranding Palm devices, and released the HP TouchPad tablet on July 1of 2011. It was one of the shortest product life cycles ever. Just 49 days later, on August 18, HP announced it was discontinuing all webOS products, which included not only the HP TouchPad, but all Palm products, including the Pre 3, which had just been released the day before.  The once prized WebOS operating system was gifted by HP to the Open Source community, who renamed it Open webOS. And that was the end of Palm. 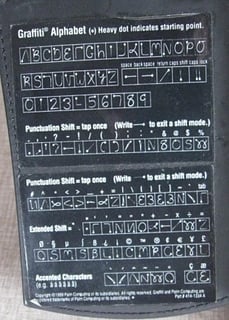 What had happened? It wasn't one event, but a series of mistakes. Tech analysts point to 3Com's delays in spinning off Palm as an independent company. That in turn, contributed to the departure of Palm's founders to start Handspring, sapping most of the creative energy and leadership from the company.

WebOS was a technical success, but a marketing failure. Only one company was using it, and that made it unsustainable in the long run. Even a large company like HP could not afford to prop it up until if and when more users came on board. Soon, they had to cut their losses. The odds are that if HP hadn't acquired Palm, it would have gone under much sooner than it did. Palm had seen the great potential of webOS combined with the Pre, and they bet the farm on its success, but in the end, they failed.

Our pictured Palm m100 was released in August 2000 as a fourth-generation PDA. It was one in a series of four low-end PDAs including the m100, m105, m125 and m130. All shipped with Palm OS 4.0. Low end meant the cases and screens were made of inexpensive plastic, the display was smaller, and all but the m130 ran on two AAA batteries rather than rechargeables. While there was an internal backup battery, it was rather quirky, and Palm recommended replacing one AAA battery at a time. If you changed them both at once, the memory could crash, then all your settings and data would be lost.

The m100 did not have internet capability. It did have a serial cable to sync data with a computer. Palm Desktop software was provided on a CD-ROM. It was powered by a Motorola EZ Dragonball processor running at 16MHz, and it had 2 Mb of RAM.

Our m515 was released in March of 2002. It was a follow-up to the m500 of a year earlier, and had a few improvements. It shipped with OS 4.1, and came with 16 MB of memory. The back lighting was improved over the m500. Common to all of the m500-series was an SD expansion slot, which allowed for both memory upgrades and add-on devices.

The attic collection includes just these two PalmPilots, both of which had been buried in a desk drawer for several years. The m100 was found in an electronics recycling bin, where it was almost missed under dozens of cell phones. The m515 was purchased new, and used for several years. Both are in working condition. They will be displayed on the bookshelf devoted to the personal electronics revolution.

For more from Tom Vernon's Found in the Attic series, check out these articles: