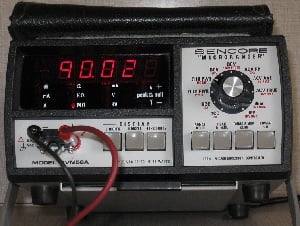 A better title for this month's technical missive might be "Found on the Workbench", because that's where this item has lived for the past 30 years. When it was introduced in the early 1980s, the Sencore DVM-56 was a milestone device. It was one of the first DVMs to feature autoranging, thanks to the marriage of voltmeter and microprocessor technologies. No more constant fiddling with the range switch, remembering units of measurement, or where the decimal point goes. Other nice features were a programmable dB function, peak-to-peak, average and true RMS AC ranges, peak and null indicators and switch-selectable resolution of 3, 4 or 4 ½ digits. Resistances could be measured up to the unheard of range of 100 megohms and greater by paralleling a 90 meg resistor across the input terminals and using the Hi Power Ohms function.

In the early 1980s, the Microranger was popular among repair shops and radio stations. Many users discovered that the DVM56 was about all that you needed for audio work, but there was one important caveat. The meter's response fell off around 100 Khz, and setting a recorder's bias using the peak-to-peak function could cause too-high an adjustment, and occasionally, burned out bias transistors. It was also susceptible to high-RF fields, so the DVM56 was not as useful at the transmitter site.

Inside the DVM56, circuitry was broken down into functions, each w 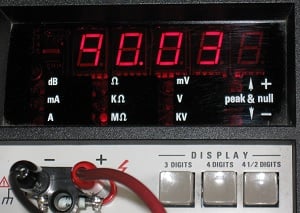 ith its own removable circuit board - power supply, display A/D, ohms, AC and controller. The DVM56 was designed before the days of Large Scale Integration (LSI), and many of these functions are available today on a single chip. The brains of the Microranger is an Intel 8035 8-bit microcontroller. Developed in 1976, the 8035 has an on-chip clock oscillator, two 8-bit timers, 27 I/O ports and 64 bytes of RAM. The 8035 uses an external EPROM memory chip.

This particular Microranger was purchased for contract engineering work in the early 1980s and has performed flawlessly. Except for occasional trips to the calibration lab, it has been in continuous service ever since.

A key part of Sencore's marketing strategy in the early days was on-site sales and equipment demonstrations. District sales reps would make the rounds of radio-TV repair shops, 2-way and broadcast stations in red Sencore vans. Another element was a monthly newsletter, Sencore News. Much of the company's sales pitch was about demonstrating how Sencore equipment could make small repair businesses profitable by reducing the time it took to do troubleshooting, thus enabling the repairman to get more equipment out of the shop per day.

By the mid-‘80s, the consumer repair business was rapidly changing. Large scale integration made more elaborate equipment available for a lower cost. This more complicated equipment became increasingly difficult to repair. At the same time, the cost of living and thus, labor costs, were rising. It soon became cheaper to throw broken VCRs, TVs and radios away rather than have them repaired. A few repair businesses responded by going into home theater or security, but many simply closed up shop as owners approached retirement age. Sencore needed to reinvent itself if it wanted to survive.

And so it did. The company transitioned into a provider of video transport/compressed video technology, Quality of Service (QoS) Monitoring and Analysis, multi-format content conversion and backhaul solutions for broadcast, satellite, cable, IPTV and content providers. Still based in Sioux Falls, Sencore is a regular exhibitor at NAB.