This Found in the Attic installment is an ‘80s flashback, even though it doesn't involve After the Fire, Blondie, or the Psychedelic Furs. Our subject is a 1985 Sony AIR-7, one of the earlier scanner receivers using frequency synthesis. From the name of this receiver, it's easy to surmise that it was designed to monitor the aviation bands, although it did quite a bit more.

A switch on the back of AIR-7 permitted changing from the North American 10 Khz to European 9 Khz channel spacing. Sony also made a few different variants of the AIR-7 to accommodate European and Canadian aviation bands, which had different frequencies than American.

The most striking feature of this receiver is its cabinet styling. With its 6.5" x 3" x 2" case and flexible rubber-coated antenna, it looks like an '80s style walkie talkie, obviously to appeal to aviation enthusiasts. Presumably, it came with a carry strap and case when new.

The AIR-7 can be powered by four AA batteries, an external AC adapter, rechargeable battery pack, or car battery adaptor. The AC adaptor is a good idea for indoor listening, as this radio consumes batteries at an alarming rate. Published specs give an estimated life of 9 hours for an external pack with four C cells, and it's a good bit less for AAs.

Tuning of the AIR-7 is accomplished via a quartz-controlled PLL (Phase-Locked Loop) and a microprocessor. Stations may be selected by direct, scan, memory, or manual tuning. While today's scanners can store hundreds of frequencies in memory, this receiver can hold 40, ten for each band.

The front panel keypad can be a bit intimidating, and reading the instructions is really necessary. The simplest way to tune a single frequency is by pressing the direct key, entering the frequency, and then 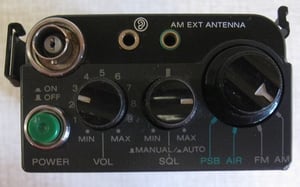 hitting enter. This frequency will be lost as soon as the power is turned off. If you don't know the frequency, press the SCAN+ or SCAN- keys to cruise up or down the band. By noting the frequencies as the AIR-7 scans, you can create a list of channels to later enter into memory. Manual tuning is accomplished by holding down the  SCAN+ or SCAN- keys until the desired station is received.

As a practical matter, it's best to store frequencies in memory. Once the desired station is tuned in, press ENTER along with one of the memory keys. A beep sounds and dot on the memory display indicates the station has been stored. Once that is done, you simply press the MEMORY SCAN button, and the AIR-7 scans from memory location 1 through 0. The PROGRAM function enables you to change the sequence of memory scanning, while PRIORITY checks a memory frequency for a signal every three seconds.

I keep a printout of frequencies and memory locations taped to the back of the receiver, as it has occasionally lost memory. It's likely there is an internal battery to hold up memory while the battery pack is removed, and that battery gave up decades ago.

There's usually a lot going on in the aviation band around airports, and a scanner is really necessary to keep track of it all. At small, non-towered airports, there is just one unicom frequency, where pilots communicate directly with one another to enable orderly and safe arrivals and departures. At larger airports, there are separate approach and departure frequencies, where pilots talk with air traffic control for takeoff and landing instructions. A separate ground control frequency is usually available, where aircraft are directed around the numerous taxiways to or from their hangar or terminal. Pre-recorded aeronautical information is available on the ATIS (Automatic Terminal Information Service) channel. Broadcasts include weather updates, active runways, available approaches, NOTAMs (Notices to Airmen), and other information required by pilots using the airport.

Several years ago, two Sony AIR-7s were discovered in an electronics recycling bin, buried under dozens of obsolete cell phones. They were in pretty rough shape. By cannibalizing one AIR-7, there was enough hardware, pushbuttons and other cosmetic parts to make a complete radio. Once it was powered up, it worked! If yours doesn't, the service manual is readily available as a free download on several web sites.

By today's standards, the AIR-7 is a dinosaur. People actually laughed when I brought it out to the local airport. Today, there are air band transceivers that are one-third the size of this 30-year old receiver. Laughter aside, it works well, and is often used to monitor the local unicom frequency as small aircraft take off and land at the nearby airport.

For other exciting vintage tech Found in the Attic, check out these recent installments:

Found in the Attic: Fly with an Edo-Aire ADF Receiver