The Stanton RM-THREE disco mixer is such a recent device that it almost doesn't qualify as a Found in the Attic item, even though that is where it has lived for the past decade. It dates from the late 1990s. This Stanton, along with its successor, the RM-3S, have long been out of production. But it recalls the purpose-built disco mixers, and a time when the turntable began its transition from a device to playback recorded media into a creative tool in its own right.

RM-THREE has two mic channels with EQ. Three channels are available for turntables or other line-level inputs. These channels have the usual effects, cue, EQ, pan, and frequency kill switches. A crossfader fades the master output between channels 1 and 3.

As a semi-pro device, all the inputs (save the microphones) and outputs of the RM-THREE are on unbalanced RCA connectors. Power is supplied by an external 12 VAC, 1 amp transformer.

The weak point of the RM-THREE and comparably priced mixers are the switches, pots, and slide faders. The warranty specifies 15,000 cycles for slide faders and 10,000 for pots and switches. Stanton offered a 30-day warranty on these parts. On the plus side, the slide faders are easily removed from the chassis and wired to sockets, so cleaning and replacement isn't a problem. Switches and pots are both PC mounted, and some disassembly would be required to access them for removal. Since this device has been out of production for several years, these components may be made of unobtainium.

Under the cover, the mixer is laid out on several circuit boards. Most of the wiring is on ribbon cables, and all have connectors. Disassembly entails removing knobs and connectors for the desired board, which is then held in with two screws. Owners' manuals are easy to come by, but service manuals for the RM-THREE seem to be difficult to locate.

The turntable's transition from playback device to creative tool started in the clubs of the late '70s and early ‘80s and eventually spread to radio stations, particularly those with a disco format. Part of the allure of club mixes was the continuous beat from one song to the next. It all started in 1975, with Gloria Gaynor's debut album Never Can Say Goodbye, which had one side recorded in the conventional manner, while the other had "Honey Bee", "Never Can Say Goodbye", and "Reach Out, I'll Be There" tracked together in a 19-minute disco extravaganza with a synchronized, nonstop beat. It was an overnight success on the dance floor. Soon, club DJs were playing long sets with a continuous beat.

Of course, most of the 12-inch singles had slightly different beats, and they were often marked on the label. 120 beats per minute was the average. The trick was to use variable-pitch turntables, two were the norm, but three were preferred. The DJ would usually listen to the upcoming single in cue, and change the pitch to match that of the record currently playing. As the record was ending, there was a gradual cross-fade to the next song with no change in beat. When done skillfully, it was magical.

In the late ‘70s however, radio stations with a disco format did things the way they always had. Disco was programmed the same as any other musical format. Play a song, back announce, talk up the next song, and do a commercial break every 15 or 20 minutes. Some stations, particularly in urban areas, had great success with disco. But there was clearly a difference between listening to disco music on the radio and experiencing it in a club. That was about to change.

It is 1979 in Boston. WWEL was about to transform from a beautiful music station to disco, being reborn as Kiss-108. Sunny Joe White was hired as program director. White was a visionary with programming and wanted to bring the club ambiance of disco to the radio. That entailed having three variable-pitch turntables in the studio, the same type of club mixes, and the playback recorded crowd ambiance during the DJ's announcements.

For radio though, there was one hurdle along the way. By 1979, the Technics SP-10 mk II had emerged as the leading direct drive turntable in broadcasting, replacing earlier designs with rubber idler wheels and rim drive. But the SP-10 mk II had fixed speeds. With some skillful modifications h 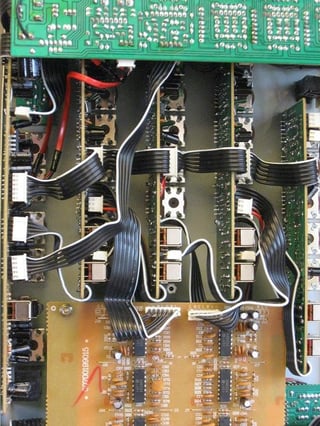 owever, a potentiometer could be added to the SP-10's circuit so the pitch could be changed. This was clearly a case where the art was ahead of the technology. Later Technics broadcast turntables, notably the SP-15, embraced variable pitch technology. The digital display even told you the percentage the pitch was being changed.

For Kiss-108, the art and the technology came together perfectly. The station was soon on top of the ratings, and the idea of disco radio stations doing more sophisticated mixes caught on. Around the same time, disco stations in New York and Los Angeles made similar transitions.

From these humble beginnings of changing a turntable's pitch, the next chapter in its creative evolution was scratch mixing. But that is another story altogether.

Stanton Magnetics, LLC is best remembered as a manufacturer of phono cartridges and styli. Many broadcasters well recall the basic 500 series, as well as the more high-end 680 series of cartridges, although there were also extensive lines of consumer-grade devices. The company also ventured into electronics manufacturing in the late '70s, with the 310 professional phono preamp, a device still sought after by vinyl aficionados. As the consumer and broadcast markets collapsed, the company rebranded itself as a supplier of equipment for clubs and DJs – controllers, CD players, turntables, headphones, Deckadance DJ software, and related accessories.

Our Stanton RM-THREE was pulled out of a club about 10 years ago, when it upgraded to a more sophisticated mixer. It is in working condition, and was given a cosmetic cleanup prior to its photo shoot.