For over four decades, open reel tape was the medium of choice for radio stations and recording studios. Over that time, recorder technology, in particular the record-playback electronics, made quantum leaps in performance. Vacuum tubes gave way to transistors, and finally integrated circuits. The history of the technology is quite interesting, and this month's subject is a bit of a mystery, so come along as we examine Taber Manufacturing and Engineering Company's Taberamp tape recording electronics.

From the late 1950s through the 70s, Ampex 350 and later 440 recorders were a staple at practically every radio station in the country. They were legendary for their battleship-quality construction and long life. Ironically, that was also part of the problem. 350, and later 440 record-playback electronics were alive and well for many years after their audio specs had passed their prime.

Modest improvements could be made with the 350 by replacing the noisy carbon composition grid resistors with metal film equivalents. VIF International sold a FETRON replacement for the 12SJ7 vacuum tubes. Underground mods circulated for the 440, also making improvements in the specs.

The biggest gains in performance however, came with the introduction of op amps in the 1970s. It was easy to breadboard an opamp-based tape preamp that easily outstripped the performance of the factory-built electronics, but there were a few gotchas. For example, switching the EQ components between high-and low speeds, and integrating the sync functions. Usually you had to build and wire in an additional bipolar power supply as well. The scope and complexity of building your own fully functional playback electronics was something few station engineers were willing to attempt. And that still left the record electronics to deal with.

Little help was forthcoming from Ampex, or other recorder manufacturers, who were far more interested in selling new machines than upgraded electronics for the old ones. In 1972, a couple bright young engineers named Jim Wood and Mark Drake decided to tackle the whole problem by designing a rack mount box with state-of-the-art record-playback electronics that was 100% compatible with Ampex 350 and 440 transports. 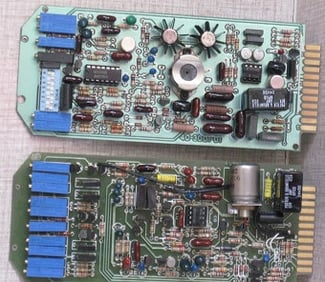 egrated circuits and DIP switches, the electronics could handle high and low impedance heads as well as 3-speed equalization to accommodate any combination of NAB and IEC characteristics. Wood and Drake founded a company named Inovonics to sell their Model 375 electronics, which was a huge success. The rest, as they say, is history.

Inovonics was the largest, but not the only manufacturer of replacement electronics. Taber was another player, although a very small one. Two Taberamps have been discovered in the attic, with serial numbers 4 and 10, confirming that this was a limited production device. What makes them interesting is the sophisticated design and quality of construction.

On the 3 ½ inch rack mount chassis are two channels with monitoring and sync functions, switching for high and low EQ, headphone jacks, illuminated VU meters and record-playback level controls with calibrate positions. All circuit boards are easily tweaked and accessed by removing a front-panel cover.

The Taberamp has the same connectors as Ampex electronics for playback, erase and record heads as well as transport interconnect. All of the components and connectors are mil-spec. Circuit cards are double-sided with gold edge connectors and superb construction. The quality of the finish and precision of the sheet metal work is equally impressive.

Each channel has three circuit cards: record, reproduce, and switching/sync functions. Common to both channels is the power supply and bias oscillator. All boards have gold edge connectors and are easily removable. Amplifier circuits are designed around 5534 ICs.

These Taberamps were saved from the dumpster during spring cleaning at a radio station workshop. A service tag indicates the last time they were calibrated was 1983. By the mid-1990s when they were rescued, digital technology was rapidly making the analog reel to reel medium obsolete. Despite the passing of 40-odd years from their manufacture, they are in surprisingly good shape. Both are in working condition, and pass an audio signal from input to output, although they have not been connected to a transport for full checkout.

The Taber Manufacturing and Engineering Company of San Leandro, California, was founded in 1967 by William “Bud” Taber, as a small operation that he ran out of his basement. In 1978, he sold the company. Taber was involved in many areas of the tape recording industry. They were the Northern California region dealer for Ampex. They sold Scully recorders, STL test tapes and Taberaser bulk tape erasers. They also relapped heads and rebuilt head stacks for many brands of professional ta 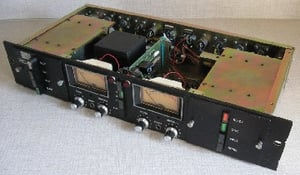 pe recorders. The Taberamp was one of their products, although it was never advertised in trade publications, and was probably produced in very limited numbers. The company has been out of business for many years.

Efforts to locate manuals or additional information about the Taberamp have come up empty. The excellent quality of construction suggests that they were private-labelled by another manufacturer for Taber, but by whom? We know it was not Inovonics. Perhaps our readers have some pieces to the mystery that they can share.

In the meantime, with their black aluminum faceplates, illuminated VU meters and 70s styling, they make attractive display pieces for the home office.