This chapter of Found in the Attic explores a forgotten chapter in the history of broadcast remote control technology, transmitter extension meter panels.

In the earliest days of radio, the Commission required all operating transmitter sites to be manned by someone with a First Class FCC license. That person was required to take meter readings every 30 minutes, maintain the transmitter log, and make repairs, or switch to a backup in the event of failures.

As technology evolved, and transmitters became more reliable, the rules were relaxed so that sites could be controlled remotely. In FCC lingo, the studio where the operator on duty was stationed was known as the control point. They Commission allowed most stations to have operators with a Third Class license and broadcast endorsement on duty. There were exceptions for directional stations, and those with higher power, which still required the First Class ticket.

Some stations had studios and transmitter in the same building. Usually, the transmitter was not located in a live studio, due to blower noise and heating/cooling considerations. The FCC spelled out requirements for these situations using extension meter panels.

The meters used in extension panels had to be identical to the ones on the transmitter for power calculations, namely plate 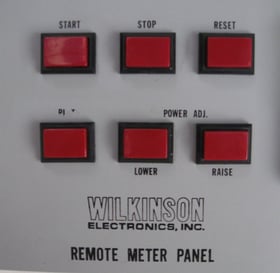 One of the more out-of-the-box interpretations of these rules was seen at a 5,000-watt AM station in Harrisburg, PA. A Gates BC-5P was used as the main transmitter. While conventional extension meters were readily available from Gates, the chief engineer envisioned something entirely different.

A railroad track with a width of about four inches was fabricated out of metal tubing and plywood. It was suspended from the ceiling about three feet from the transmitter, and at eye level with the meters. On the track ran a cart that was powered by a DC motor. The cart had a video camera that was aimed at the meters. It took about a minute to cycle back and forth on the track. At each end was a bumper. When the cart reached the end, a microswitch hit the bumper and reversed polarity on the motor, sending it in the other direction.

In the studio there was a 12-inch portable TV that had been modified with a video input. The meters were displayed on the TV at about three times actual size. Each one was displayed long enough to take a reading. This arrangement followed the spirit, if not the letter of the FCC's regulations. The chief engineer claimed it was a great time-saver because the hassle of recalibrating remote meters every week just went away. It probably had more to do with the fun of building the device and getting it to work properly.

At a top-40 radio station in the early 70s, it wasn't long before this video extension meter system became the target of pranksters. An anonymous artist drew unflattering caricatures of station management, and posted them on the transmitter in the space between the meters, so they too became part of the scan. Then there were jokes, with the set up on several panels, and the punch line at the end. When that got old, inappropriate pictures of women were posted, which management quickly removed.

The pictured Wilkinson Electronics extension panel was found while cleaning out a transmitter room about six years ago, and dates from the mid-1970s. It has few cosmetic dings or scratches, and is in excellent condition. It had been used to monitor a long-forgotten ITA FM 250B transmitter. Any documentation that came with this panel was long gone. In addition to the extension panel, remote control  probably required purchase of a motor-driven rheostat to raise and lower power, as the ITA dated to the days when there needed to be an operator on duty. All connections were made to a terminal strip on the rear of the panel. In addition to the required meter and control functions, the panel required 28 VDC to power the three 334 lamps that illuminated the PLATE, START and STOP

In these days of web browsers and control over IP connections, this panel has no practical value whatsoever. It does make a nice display and conversation piece, as it recalls the days when we sometimes had to squint and interpolate between divisions on the meter to take transmitter readings, rather than just viewing the information on a laptop.