Have a Blast in Vegas 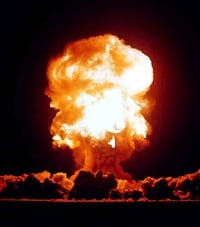 Those of us who make the annual trek to Sin City for the NAB show every April have likely done all the tourist-y stuff. We've already shaken off the Gulch's glitter, experienced the World's Most Constant Traffic Jam (a/k/a The Strip) and seen enough white tigers to fill a small zoo.

If you're visiting for NAB - or any other reason, this year or anytime - try something different: the National Atomic Testing Museum. After all, Vegas was mere miles away from the Nevada Test Site, and during the days of above-ground tests, mushroom clouds could be easily seen over the skyline of the downtown casinos. Besides ephemera and memorabilia, the highlight of the Museum is the motion simulator designed to give you a feel for what it was like to be on-site when a test device was exploded.