As the “Voice of NASCAR,” the Motor Racing Network (MRN) is the principal radio broadcasting operation of the National Association for Stock Car Auto Racing. They’ve got more than a few victory laps in their record books: Since MRN’s first broadcast – the 1970 Daytona 500 – they’ve aired hundreds, if not thousands of races. And not just the premiere events of the NASCAR Sprint Cup Series - but the NASCAR Nationwide Series and NASCAR Camping World Truck Series races as well.

Doug Watson is the Chief Engineer for MRN, and he and his crew make the technical end of the broadcasts happen. Up until last year, MRN used two large trailers and one smaller trailer with analog equipment, but Doug decided it was time to modernize the operations.

“We were attracted by the simplicity and flexibility of Axia installations as compared to analog,” recalls Watson, “but were concerned about durability, since the gear was going into a truck. 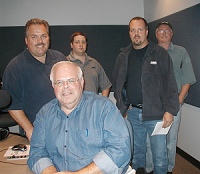 ” After talking with Axia Support (and seeing xNodes, Axia’s newly-introduced high-performance convection-cooled IP-Audio adapters), he knew the gear would stand up to MRN’s rigorous schedule and green-lighted outfitting the new trailer. And it has to stand up: MRN broadcasts weekly to over 700 affiliates, so false starts are not an option.

(Full disclosure: this is not MRN’s first adventure with Axia studio gear. Watson first took the plunge in 2007 with Element consoles when the main studios moved from Daytona Beach, Florida, to Concord, North Carolina. You can read more about that here.)

Watson ordered a custom 53’ Featherlite trailer and had it delivered to MRN's Concord facility in mid-September 2013. Inside are two control room / studios, an edit suite and an office, as well as a kitchen, work space for on air talent, and a rest room. “It really becomes our home away from home,” Doug says. The installation includes two Axia RAQ compact rackmount consoles, a number of analog, microphone and GPIO xNodes, two Axia xSwitch Livewire Network Switches and three Telos Zephyr xStream ISDN codecs.

Working off and on through the racing season, and more steadily in December, the trailer was completed in time for the January 25 Rolex 24 in Daytona. Assisting Watson in installing equipment and wiring the trailer were engineering staffers Bob Wolfe and Sam Williams as well as truck drivers Dan Cressman and Mike Donchef (who doubles as their video installation wizard). Fingers were crossed for the trailer's 24-hour debut, but Watson says “There were no glitches. Everything just worked flawlessly.”

NASCAR Remote Truck Covers the Miles - In more Ways than One

MRN regularly uses two trucks to cover NASCAR events that occur simultaneously or in different locations. With the new trailer and its Axia gear running perfectly, the oldest analog broadcast truck will be retired, and the other analog truck will enter secondary service. Trucks average about 30,000 miles per year, and are often on the road for six to eight weeks at a time.

A typical MRN remote involves the driver and truck arriving at the track a day or two before the event. The driver makes the phone, IP and ISDN connections, then an engineer flies out to the location and connects the on-site remote broadcast booth to the truck via fiber optic cable.

Now that his new trailer is completed and running flawlessly, Watson is already planning his next project. “I want to replace our old analog setup for the broadcast booth, and I expect that Telos equipment will be a major part of that installation as well.”