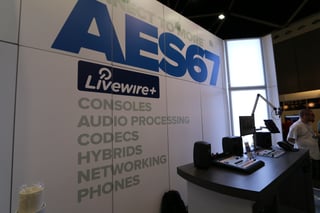 IBC 2016 has come and gone, and this was one of our best shows yet! There were a lot of exciting things happening at both the Telos Alliance Radio stand and our newly formed TV Solutions Group stand. Read on to learn about the latest products, trends, and news. Plus watch our own videos live from the IBC show floor, and make sure to check out the photo gallery at the bottom. Maybe you'll spot yourself!

Telos Alliance announced the TV Solutions Group at IBC 2016, which was very well received by both Minnetonka and Linear customers. This new division will focus on the expanding needs of the TV and broadcast markets, including customer requirements and systems to meet those requirements, utilizing both file-based and real-time processing and management products from the full Telos Alliance product mix. See more news from the TV Solutions Group in the video below.

IP Interoperability Was the Hot Topic

Interoperability was the big buzz at IBC this year! In the IBC Interoperability Zone we showed some of our own gear, including the Axia xNode and Linear Acoustic AERO.soft, in a groundbreaking demo alongside gear from more than 30 other manufacturers! Our CTO and interoperability luminary Greg Shay was also manning the stand answering technical questions.

"'AES67' may have been the term spoken more often than any other—at least among networked audio enthusiasts. Broadcasters now know enough about AES67 to understand its primary benefit: Proceed confidently into a mainstream AoIP infrastructure, and you'll be able to connect with other equipment and studios that use other AoIP standards as long as both support AES67. It's a huge 'green light' to engage AoIP at all levels of the broadcast workflow," says Kirk Harnack, Director of Multimedia Marketing at Telos Alliance.

Livewire+—our AoIP protocol that goes beyond audio interoperability to deliver advertising, discovery, and PAD as well—was used in an AES67 demo in the Media Networking Alliance stand, alongside gear and protocol from other MNA members. Learn more from Telos Alliance VP Sales, Support, and Marketing and AoIP expert Marty Sacks in these two videos live from IBC!

Our new µMPX codec is able to transport high-quality Multiplexed FM signals over a small 320kbps data pipe. While some companies have full-bandwidth “linear” MPX over IP offerings, they require very high bandwidth. μMPX slashes bandwidth needed for distribution by nearly 84%! At IBC, we showed this technology in a live (not simulated) demo. "Engineers took special interest in Omnia's µMPX demonstration at IBC. We conveyed a solid FM Stereo Multiplex, along with RDS, over just 320 kbps of IP bandwidth between the Telos Alliance stand and the Nautel stand. This modest bandwidth requirement opens up interesting and useful opportunities for both backup and main Studio-Transmitter Links," says Kirk.

OmniaSST Turns Your PC into an Omnia Processor

The µMPX technology is also available in OmniaSST, the Telos Alliance's forthcoming audio processing software previewed at IBC that turns your PC into a high-end audio processor.

Based on a powerful processing engine designed by Hans van Zutphen, OmniaSST is the first processor to support the µMPX codec. Its reduced data requirements mean high-quality multiplexed audio and RDS signals can be directly routed over IP from your processor into an exciter, opening up tremendous possibilities for efficient MPX audio transport.

Aside from this cool new feature, OmniaSST features a full suite of tools that clean and repair incoming audio, optimizing it before it hits compression, limiting, and final processing stages. OmniaSST can remove unwanted sounds such as a 50/60 Hz hum from bad cables, repair clipped audio using the Perfect Declipper, improve the sound of lossy compressed audio such as MPEG2/MP3 material, and automatically repair stereo phase shift problems. Stay tuned for more details as we roll this product out, and watch the videos from Hans at IBC below for more info.

You've been following the buzz on social media by the water cooler, now hopefully you got to experience it first-hand at IBC. The knockout sound of Omnia.11's G-Force Dynamics plus Perfect Declipper make your sound truly great, not to mention more competitive, cleaner, clearer, and louder. Our customers are raving about it already. Interested? Try it for free! Watch the video below to learn how.

While it did make its debut at IBC, VX Prime is anything but a debutante, letting you outfit your facility with the best possible call sound quality, for less. That's because VX Prime means BIG performance for small facilities.

"Telos VX demonstrated to IBC attendees that IP-audio can actually begin from listeners' and reporters' mobile phones, come in via VoIP/SIP, and go on-air with a clarity never before heard in traditional telephony. The new Telos VX Prime system accelerates adoption by coming in at a lower price that makes perfect sense for small to medium broadcast facilities," Kirk says. Check out the video below for more information on VX Prime!

Of course, no self-respecting broadcast tradeshow would be complete without some conversation about streaming. Telos Alliance, leader in streaming technology and education, did not disappoint. In fact, many of our streaming products now include the new Fraunhofer codec xHE-AAC for incredible low-bitrate performance on both talk and music formats. See the buzz from the show in the video below, and don't forget to take advantage of our Z/IPStream software upgrade promotion. You can get an upgrade from Z/IPStream AXE to X/2 for only $650, and from X/2 to 9X/2 for only $995!  Learn more about xHE-AAC with Kirk live from the IBC show floor, below.

Finally, if you need press releases or any additional information about Telos Alliance radio at IBC 2016, visit our IBC 2016 Press Room, below, or leave us a comment here. We'd love to hear from you!