Infinity IP Intercom Crosses Market Borders at NAB and Beyond

If you visited Telos Alliance at this year's NAB, you may have noticed that we had two booths, one in the north hall and one in the south hall. Why did we add the extra expense, not to mention the extra steps to our pedometers as we traveled back and forth between booths? The answer is simple: Because the Telos Alliance is one company that serves many markets, including TV and Radio, two critical broadcast industry segments, both with unique challenges. What was interesting about this year's show, however, is that the star attraction was the same in both the TV and Radio booths: the new Telos Infinity IP Intercom, developed by the Telos Alliance engineering team that invented AoIP for broadcast in 2003.

Infinity was designed to extend beyond traditional market borders and serve as an intercom solution, not merely a product "for TV" or "for Radio." Leveraging AoIP technology originally developed in the radio market, Infinity was introduced first to the TV market. However, two of the initial Infinity installations are in the radio market. This proves that it is truly a Telos Alliance solution spanning both segments of the industry, with possible homes even in nontraditional markets such as theater, cruise ships, sporting venues, and more. 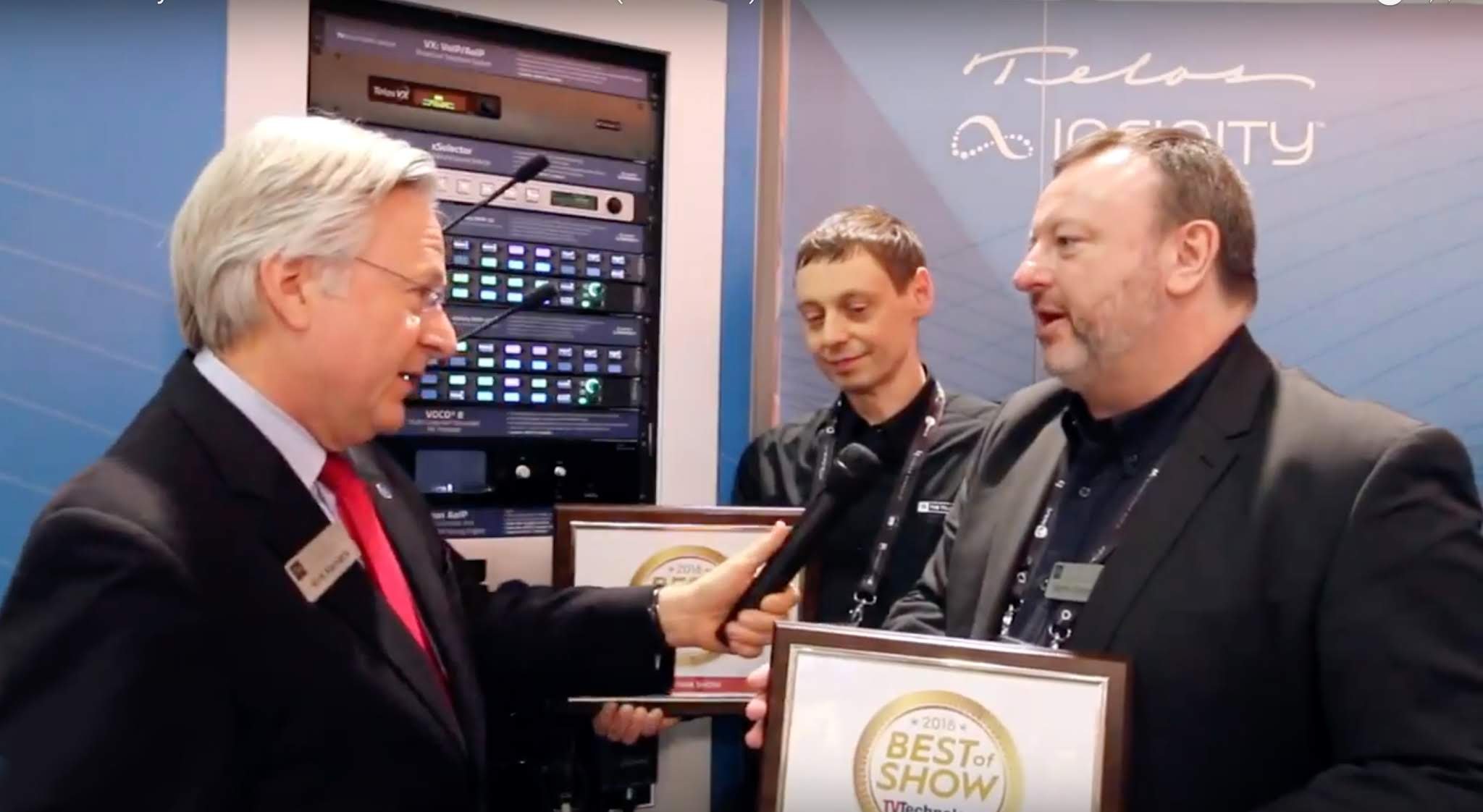 The impact on the traditional markets is evidenced by the two NewBay Best of Show Awards Infinity received at NAB 2018—one from Radio World and one from TV Technology (in addition to the IBC 2017 Best of Show Award from TVBEurope). The groundbreaking matrix-free AoIP Intercom is big news, a complete reimagining of broadcast communications. But why is it so unique?

For one, it breaks the proverbial matrix with an IP backbone, replacing outmoded matrix technology with an advanced, distributed IP network solution that provides superior functionality in a simplified, more elegant form. Just like Telos Alliance disrupted the industry with revolutionary IP tech for consoles back in 2003, it's now doing the same for intercom. Being matrix-free allows plug-and-play networked hardware and software devices to be added to the system as part of a planned or ad-hoc change, without you ever having to worry that you might exceed the number of available ports on a matrix.

The benefits of IP for intercom are the same as those for AoIP in our Axia mixing consoles and other Livewire+ AES67 gear. IP intercom is easy to integrate, is completely scalable, is less expensive, and adds total flexibility.

Like its name implies, Infinity's possibilities are endless, whether you are in TV, in radio, or beyond. We invite you to download our new white paper on Infinity and how this technology can reduce the number of intercom system cables; how systems are no longer limited by the number of matrix I/O and crosspoint counts; how you can easily expand your system at will; and how AoIP intercom frees you from having to purchase extra capacity “just in case.”