Every piece of broadcast equipment has its 'power users', the ones who use every feature, input and output in every conceivable way, along with some that weren't envisioned by the designers. For the Telos Z/IP ONE IP Broadcast Codec, that user would be The JOY FM. Between their Florida, Georgia and Alabama operations, the Radio Training Network has over 40 Z/IP Ones at its JOY FM stations, used for a variety of applications.

Dave Anderson, Chief Engineer of JOY FM, is also an early adopter of the Z/IP ONE, purchasing his first unit over four years ago. “Most are used as STLs, and we connect with private point-to-point, unlicensed wi-fi, 5Ghz microwave and fiber.”

The Z/IP ONEs replaced a satellite distribution system, and the switch brought a host of benefits to JOY FM. “Our network covers most of Florida. With the new system, we are able to locate all the automation equipment at out headquarters in Bradenton. There are eight separate audio feeds with the Z/IP ONEs. This means we are able to deliver local weather and traffic to each of our stations. It gives our listeners the feel of an extremely local station, even though we're a network.” Before the Z/IP ONEs, most stations had automation at the transmitter sites, and one rather generic weather and traffic update was sent to all stations.

There was also a substantial improvement in sound quality once the satellite system was switched off. “Audio used to be delivered as MP2, now with the Z/IP ONEs, it is sent in AAC,” adds Anderson. Z/IP ONE offers the largest choice of high-performance codecs: AAC-ELD, AAC-HE, AAC-LD, MPEG Layer-2, MPEG-4 AAC-LC, MPEG-2 AAC-LC, G.711, G.722, and linear PCM. Enhanced aptX coding is also available as an optional purchase.

Operating a radio network isn't just about running high-quality audio to numerous sites, there's usually a bit of control infrastructure that goes with it. Z/IP ONE includes 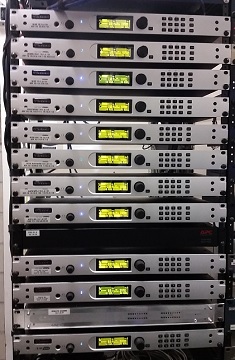 a transparent, time-aligned RS-232 channel, which is equally suitable for remote control, metadata or RDS. There's also a time-aligned 8-bit parallel GPIO port for signaling and control. Anderson was able to quickly take the contact closure infrastructure from the old satellite network and adapt it to Z/IP ONE's GPIO functionality. And perhaps best of all, these improvements came with a substantial decrease in operating expenses when compared to the satellite distribution system. “And, unlike the satellite, there's no more rain fade,” adds Anderson.

The JOY FM also uses Z/IP ONE codecs for one of its afternoon shows. The board op and one host are located in Sarasota, while the other host is in Atlanta. “As far as any of the listeners know, the entire show originates in Sarasota,” adds Anderson.

Airing live audio sent over the public Internet used to be considered risky business. Not so with Z/IP ONE. With Telos' exclusive ACT (short for Agile Connection Technology), the Z/IP ONE can sense and adapt to the condition of an IP link, and deliver superb performance on real-world networks. ACT adapts dynamically to minimize the effects of packet loss and jitter. When the bits are flowing smoothly, you’ll benefit from the lowest possible delay and the highest possible fidelity. If congestion starts to occur, Z/IP ONE automatically lowers bit rate and increases buffer length to keep audio flowing at maximum quality. You’ll get reliable audio even when network conditions are unpredictable — and the best part is that you won’t need to fiddle with settings or codecs to do it.

The JOY FM was one of the early adopters of Z/IP ONE, at a time when most stations were still using T1s, satellite networks and dialup POTS to make connections outside the station. That decision was due in large part to Anderson's prior background. “I started and co-owned an internet service provider business, and ran it for 11 years. Maintaining maximum up-time and keeping customers happy was an essential part of the job. I think that experience gave me a leg up on a lot of engineers in terms of understanding IP infrastructure.”

In addition to the Z/IP ONEs, all of the JOY FM stations are equipped with Axia IQ or Fusion consoles. The Florida operations are also equipped with Telos VX Talkshow Systems. VX is the world’s first VoIP (Voice over IP) Talkshow System — a broadcast phone system that’s so powerful it can run all of the on-air phones for a large plant, but economical enough for stations such as JOY FM that have just two or three studios.

Anderson designed his new distribution system for minimal downtime. The main path is through the Z/IP ONEs. Backup paths are provided by a pair of Verizon wireless routers. One of the routers is connected to cable, the other to DSL. “It has fully nested dynamic routing,” explains Anderson. “Whichever network can move the traffic wins.” The maximum downtime when paths switch is one second. He adds that cost averages $250/month, about half that of a legacy T1circuit.

Anderson has set up the wireless routers to send him a text message whenever they have changed a path. He has also built a lot of telemetry into the system, so many problems can be fixed without making long drives to distant transmitter sites. “If the audio processor at a remote site hangs up, we can remotely power it down and bring it up again. That saves a lot of windshield time.”

All alerts are sent to Anderson and his staff via text messages. “Getting robo-calls from a transmitter site is kind of an ’80s thing,” he explains.

All of this capability also means that The JOY FM stations operate with just Anderson and two other engineers. “That small an engineering staff for an operation this size never would have been possible in the pre-Internet days.”