Linear Acoustic®: Keeping You in Compliance

New FCC rules concerning how television broadcasters provide local emergency information to the vision-impaired went into effect this year, and TV engineers need to ensure their facilities are in compliance. Fortunately, the Linear Acoustic® AERO.100™ / AERO.1000™ / AERO.2000™ series of loudness managers may offer a solution for some broadcasters.

Product Manager Ken Tankel explains the new rules, and says a new firmware release for these units will provide users with several new options to insert EAS and other local emergency audio into the program audio channels. “This particular change in rules is coming from the FCC’s mandate to support the Americans with Disabilities Act (ADA), so it falls loosely under EAS rules, but it’s not really EAS,” says Ken.

“This tiny little rule makes things so incredibly complicated for broadcasters that it’s beyond belief,” says Ken. But, he adds, in some cases the AERO.100 / AERO.1000 / AERO.2000 loudness managers will satisfy this need.

“We have answers for a huge number of broadcasters – particularly those who do their EAS outside of the AERO.100 / AERO.1000 / AERO.2000. Any of our three units in that series can be configured in basically the same way to handle the new EAS requirements.”

Ken points out though that depending on a given situation, the hardware involved may be a bit more complex.

“Depending on a broadcaster’s particul

ar set of circumstances, an additional piece of equipment may be required. The particular needs of somebody using the AERO.100 / AERO.1000 / AERO.2000 by itself to handle EAS and satisfy the new requirement, requires an external piece of gear.”

Ken says it’s an important issue that a number of broadcasters have expressed concern over. “It’s on everybody’s minds… Every broadcaster in America has to be able to accommodate this. There has been tremendous interest in what we can do to help broadcasters with the requirement.”

Despite the additional challenge in some cases, the AERO.100 / AERO.1000 / AERO.2000 can certainly do that for a number of broadcasters.

Of course, helping television broadcasters stay compliant with FCC rules and regulations is nothing new for Linear Acoustic. Along these lines, Ken provided an update on the CALM Act, which Linear Acoustic and the AERO.100 / AERO.1000 / AERO.2000 products have had a significant impact on as well, helping broadcasters stay within the legal limits for TV commercial volume as compared to program volume.

According to the bi-annual FCC rep 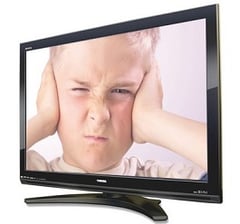 Ken points out that broadcasters took the CALM Act very seriously. “Everybody noticed the loud commercials… Everybody was annoyed by them. Our products definitely had an effect [in addressing that].”

Whatever the concern, The Telos Alliance and Linear Acoustic remain at the forefront of developing technologies that help resolve television broadcasters’ problems. Says Ken, “From measurement to loudness control, we provide broadcasters with technology that’s a world ahead of what’s available from other manufacturers.”