Quick! To the Fallout Shelter!

Ask anyone what they think of first when they hear “Las Vegas” and they’re likely to mention the retina-searing lights of the famous Vegas strip, the dazzling casinos, the over-the-top luxury hotels, the glitzy shows, and if they’re old enough, maybe even the Rat Pack at The Sands.

But there is life outside of the usual Vegas fare if you’re willing to look ever so slightly off the beaten path. For instance, there’s the National Atomic Testing Museum, a destination that by its very existence at once forces you to wince, weep, raise an eyebrow, and probably even chuckle in the way that people do when they’re both uncomfortable and busy trying to figure out if something is for real or not.

To put things in historical perspective though, one has to remember “The Atomic Age” and the promises that it offered the public in the post-war era of 1950’s America. Think Donald Fagen’s “New Frontier.” Nuclear power was billed as the ultimate solution to dependence on fossil fuels, powering everything from our televisions to our cars. Food would be irradiated to preserve it (who wouldn’t want strawberries with a measurable half-life?). Tourists gathered at the Nevada Test Site wearing special sunglasses to watch nuclear testing like it was a college playoff game. All the while, with no apparent sense of irony whatsoever, real-life versions of Howard Cunningham were donning their Civil Defense helmets and digging shelters in their backyards like giant, pale biped prairie dogs.

Seen in that light, the National Atomic Testing Museum doesn’t seem quite so bizarre. For instance, there’s the GZ Theatre where you can experience a simulated atmospheric bomb test. Or learn how to survive an atomic bomb blast and go beyond “duck and cover.” For the kids, there’s a Geiger counter display where they can learn how to test household objects and pets for radioactivity.

If atom splitting isn’t your thing, there is another side to the museum that just might get your saucer glowing. You see, Area 51 - the now-famous Air Force facility where many believe the government houses alien spacecraft (and maybe the accompanying aliens, to 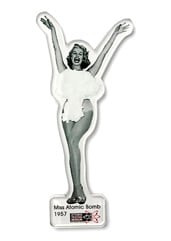 o) is a mere 83 miles northwest of Las Vegas, making an exhibit entitled “Area 51 – Myth or Reality?” an obvious addition. Visit once and you’ll never take a weather balloon or swamp gas at face value again and will sit alone in the dark listening to Art Bell reruns.

On your way out, be sure to visit the gift shop where you can pick up a Miss Atomic Bomb 1957 fridge magnet, an atomic energy shot glass, the paperback version of “Bombs in the Backyard,” a Uranium mill “no trespassing” sign, or a National Atomic Testing Museum oven and BBQ mitt.

Images courtesy of the National Atomic Testing Museum website, which has lots more information on this unique attraction.