Radio Free Asia (RFA) was an early adopter of Axia technology. Starting in 2005 with its Asia bureau facility located in Bangkok, and then later in Seoul and Hong Kong, RFA has essentially become an All-Axia house, eventually completing the upgrade with its Washington, DC headquarters, which has 35 studios.

"Axia consoles are flexible, easy to install and network, and may be configured remotely," explains RFA's Engineer John Penovich. He and Yuri Terleckyj, Sr. Technician, headed up the team that did the ten-month upgrade to RFA's Washington facilities. Initially all the studios were islands, but now are all networked together, the facility has about 1,200 sources.

Telos' VoIP-based VX Talkshow System, which replaced their aging Series 2101 setup, is part of the mix as well, riding on the Livewire network along with all the Axia consoles and routing equipment. Their VX system makes use of 4 VX Engines to handle the load of calls coming in via ISDN phone circuits, SIP from an Asterisk VoIP PBX, and Skype. All told, there are more than 500 DID SIP numbers on the system, making phone system integration with the Axia network both desirable and essential.

"Axia's show profiles are great for us," explains Penovich, "because with Elements equipped with motorized faders we can create set-ups that are as simple to use as possible. This allows our staff to engineer and produce their own segments, so our Production Engineers only have to operate the Elements for more complicated production, such as call-in and live shows." RFA has about 150 news announcers but staff training was remarkably easy. Penovich and Terleckyj setup a mock studio so RFA's training department could acquaint announcers with the operation of the Element consoles. 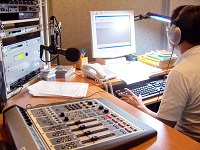 The final step in RFA's upgrade of their Washington headquarters is removal of the old TDM router. All audio paths in RFA's Master Control will then be Livewire. Routing will be done by a Pathfinder Server cluster.

Due largely to Radio Free Asia's success with these upgrades, Radio Free Europe selected Telos-Axia as well when they moved to their new headquarters in Prague. If you'd like to read more about RFE, check out the feature article in the NOW! catalog.