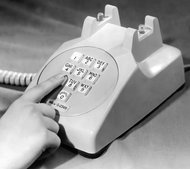 At Telos, phones are, quite naturally, rather dear to our hearts. Just days ago came the news that John Karlin, a veteran of Bell Labs and the man directly responsible for All-Digit Dialing and, indirectly, DTMF and the modern telephone keypad, passed away on January 28 at the age of 94. Without Karlin, much of the UI common to modern communications would likely come in a much different form.

In particular, Karlin was the first to apply behavioral science to the problem of modernizing the telephone instrument for optimal usage. Here's just one of several stories related on his obituary in the New York Times:

"An early experiment involved the telephone cord. In the postwar years, the copper used inside the cords remained scarce. Telephone company executives wondered whether the standard cord, then about three feet long, might be shortened. Mr. Karlin's staff stole into colleagues' offices every three days and covertly shortened their phone cords, an inch at time. No one noticed, they found, until the cords had lost an entire foot."