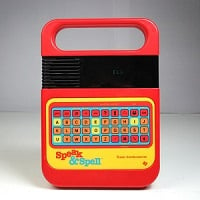 One of the endangered sound-makers at the Museum of Endangered Sounds look long enough and you can find a museum for just about everything technical. Thanks to the work of assorted packrats and hoarders, our geek history is being saved from the dumpsters. Many of the artifacts however, are in static displays, no longer in working condition. When that happens, the sounds that went with the equipment are often lost forever.

For those who came of age at the beginning of the personal computer era, the sound of floppy disc drives, dot-matrix printers and the warble of a 56K modem all evoke nostalgic memories. If you worked in broadcasting in the 1970s, you'll recall the long-forgotten clatter of teletype machines, the sound of records being slip cued and tapes fast forwarding. Not to worry, now a few digital archivists - three to be exact, are working on saving the sounds of the technology we worked or grew up with.

"We highlight sounds as a trigger effect," explains Phil Hadad, 28, a museum cofounder. Together with Marybeth Ledesma, 24, and Greg Elwood, 27, they manage the digital archive at SaveTheSounds.info. Here you can find clips with the sounds of a manual typewriter, 35mm SLR camera, Nintendo Game Boy, and many more. Hadad's ten-year plan is to complete the data collection phase by the year 2015, and spend the next seven years developing the proper markup language to reinterpret the sounds as a binary composition.

The three sound scavengers aren't the first to preserve bits of the vanishing soundscape. The BBC's forgotten sounds website seeks submissions from its listeners worldwide in order preserve some of the audio headed for extinction.