Streaming: Then and Now 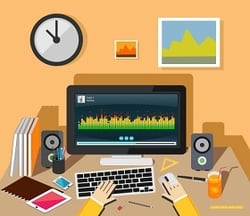 So what’s it all about?

By this point, most of us have heard the stories a million times…Streaming, streaming, streaming. Some have gone so far as to suggest that IP based streaming over cellular networks will one day overtake traditional broadcast as a delivery medium. Whatever your viewpoint on that particular sentiment, there is no question that adoption of streaming by consumers has continued to increase at a staggering pace.

The number of outlets and available platforms for consuming these services has increased at an equally rapid pace. Our comfortable days as broadcasters focusing solely on AM and FM as a distribution method are far behind us.

This increase in streaming adoption has paralleled the exponential pace of developments in personal computing and mobile technology, along with a corresponding increase in available bandwidth. The first Internet audio streams started to appear somewhere around the early to mid 90’s. At that point, however, usefulness was somewhat limited. PCs had only just started to get “multimedia” technology such as sound cards and CD-ROM drives. A T1 line at 1.544 megabits per second was considered “high speed” for a server, while users connected to their service providers via dialup modems at a whopping 14.4 kilobits per second (KILObits, not MEGAbits). There were a few attempts at streaming audio over these connections, but they had what could only be described as “horrible” audio quality at best.

As connection speeds continued to improve (albeit still over dialup modem) to 28.8, 33.6, and ultimately 56 kilobits per second, the possibility of streaming audio over these dialup connections became a bit more realistic. Some of the very first commercially successful streaming audio was via a proprietary codec known as RealAudio. This was (at the time) pretty revolutionary. Quality was still not stellar, but far better than early attempts, and beginning to approach that of FM broadcast. Availability of Internet connections via ISDN at up to 128 kbps in some areas improved the quality even further (assuming the stream was offered at bitrates that high).

Although the codecs had begun to improve, the audio for most of these streams generally still came from an FM or AM tuner, or from some arbitrary point in the audio chain. Dedicated processing for streaming or any sort of quality control wasn’t even a consideration at this point.

In the late 90s and early 2000s, due in part to a proliferation of various music sharing services, the MP3 format started to gain popularity with consumers. While the format was at first limited to individual files, it soon started to see use in streaming applications as well.

By this point the available bandwidth to users had continued to increase. Though dialup was still prevalent, DSL connections at speeds of 128 kbps and higher were starting to become available. Some broadcasters had started to offer their audio as MP3 streams at various bitrates, but consumption was still limited to computers tethered to a high-speed connection for the most part.

In 2001, something happened that would forever change the landscape of media consumption—Apple introduced the very first iPod. While portable media players did exist prior to the iPod, it was arguably the first that would streamline the process considerably and make this technology far more accessible.

Consumers could now easily bring audio content with them wherever they went. This included so-called “podcasts” (iPod “broadcasts”), which were pre-produced pieces of content that could be downloaded from providers and synchronized for offline mobile listening. It was the beginning of a completely new method for content consumption.

In 2007, Apple once again rocked the consumer electronics landscape with the introduction of the iPhone. This device introduced the world to the concept of “apps” and media consumption on the go via mobile networks without the need to tether to a computer or home broadband connection.

Mobile devices running Google’s Android operating system followed soon after the iPhone and also gained in popularity. Today, a wide variety of streaming apps are commonplace and we’ve progressed to the point where 4G LTE mobile broadband is potentially as fast or faster than some home broadband connections.

Where are we now?

Earlier, I mentioned that the quality of streaming audio for broadcasters was not a large consideration. Audio consistency was historically a big problem. Today, consumers expect the same quality and consistent audio from all of their media sources. Improved audio encoding formats such as AAC-LC and HE-AAC have allowed better quality with less bandwidth consumption. Technologies such as adaptive streaming allow a consistent stream even in challenging mobile environments with changing bandwidth conditions. Audio processing for streaming has improved along with the audio encoding. It’s important that broadcasters pay as much (or more) attention to the quality of their streaming audio as they do to their on-air signal.

ming. We’ve continued to refine these tools and earlier this year introduced the Z/IPStream family of streaming products, which combine the best of Omnia audio processing and Telos encoding technology in the form of cloud compatible software, dedicated rackmount hardware, and PCIe cards.

If it’s been a while since you thought about your station’s streaming audio, you might want to revisit the subject. Much has changed in a relatively short period of time.