The Ins and Outs of Surge Suppression 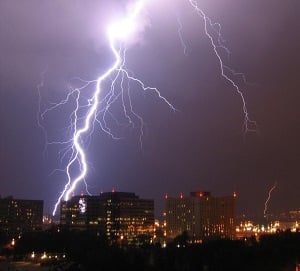 Chances are, sooner or later, some part of your facilities will take a lightning strike. Preparation can help guard your expensive equipment against damage or even destruction. Here you'll find some tips compiled by the Telos engineers to help keep your station running smoothly.

Several companies make surge suppressors intended for phone lines and ISDN lines. Some are in-line connectors with modular plugs. Others are hardwired at the demark point. The main methods of protection are Series and Shunt. Series devices typically plug directly into the line between the equipment and the demark attempting to block incoming surges before they reach your equipment. Shunt devices attach in parallel with the line. They try to direct the surge away from the equipment by providing a better path to ground. Some devices combine both methods of protection.

Some Telco equipment manufacturers offer punch block solutions, such as the Siemon Pico Protector Module. These mount right to the punch block in place of bridging clips. Other modular devices are offered by several companies (such as Polyphasor, TrippLite, APC, and Panamax) that include ISDN and T1 solutions. (Note that the basic shunt device for POTS lines will work for an ISDN line when utilized into the U interface of a Zephyr.)

Power conditioning and backup is fast becoming a requirement for many sensitive electronic devices including computers, audio processors, mission critical components, any device that relies on clean power for a CPU controlled device. Many of the home backup power devices even include RJ jacks for network and/or modem protection. Larger commercial types of power backup provide better protection that the smaller consumer devices. They have a better reaction time and offer better line filtering. Some of the very large installations tend to work in a "hot" mode where they are constantly online and commercial power is merely maintaining a charge on the batteries. 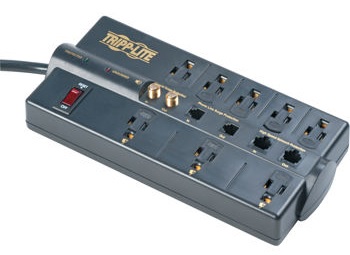 A good surge suppressor should have some kind of an alarm system. This is because once a surge suppressor has done its job typically they are no longer any good and should be replaced. The technology behind some suppressors is that there are special components inside that get destroyed during a major lightning strike. The deadly force of the lightning is dissipated while components themselves are being destroyed and (ideally) not your equipment. If a series device fails "open" it will prevent power from passing to your device. A shunt device may fail as well but unless it shorts the power to ground you might not know this device is no longer protecting your equipment. This is the reason for some type of alarm or indicator informing the user of a failed status. Better surge suppressors have a longer useful life, but after so many lightning strikes (or one HUGE one) they may fail.

Power back up devices or Uninterruptible Power Supplies (UPS) convert DC power supplied from batteries into AC power. Smaller units tend to provide just enough power to ride out a short duration power outage. The idea is to ride out these power outages till the power comes back or allow you enough time to gracefully shut down your equipment. More sophisticated UPS units have communication ports for monitoring their status so that equipment can automatically shut down should commercial power be lost.

Small to medium UPS units tend to be preferred where there is a backup generator installed, such as a transmitter site. This works well when commercial power is lost and the UPS carries the load until the backup generator comes online.

Things to consider about UPS devices

Some of the smaller and older UPS units provide little to no surge suppression. Many people buy these devices thinking that they are also protected from power surges. Best to check the manufacturer's specifications.

Some of the more sophisticated UPS units do not tolerate "dirty" power. Dirty power is considered to be power that might be off frequency, with various spikes and sags within the waveform, and/or lower or higher voltage levels. Older and poorly maintained generators may not provide clean enough power to the UPS units for them to switch from their batteries back to commercial/generator power. Eventually the UPS will drain its batteries and your equipment is no longer powered. Some of the better UPS units allow adjustment of the AC line tolerance parameters. If the UPS has this feature you may need to experiment with the settings to get them to work properly in your situation. Also dirty power has been know to cause some of the cheaper UPS units to lock up their CPU's and prevent the unit from passing any power.

For power solutions check out products from APC Inc., Best Power, or TrippLite (see links at end of document).

Suppression of lightning and surges for RF follow the same principles for dissipating surges as do telco and power lines. Polyphasor has a full line of devices for RF.

Proper grounding is essential to maintaining equipment safety. Many facilities employ a grounding system that is very intricate. The idea is to provide a central grounding point for all audio and broadcasting equipment to maintain a common ground. RF lines entering buildings from antenna structures would typically have copper strap bonded to the outer conductor and shunted to the common ground to help divert the major surge away from their equipment. Equipment racks in engineering rooms, studios, and transmitter sites are also tied into this common ground system to maintain the same potential. Dedication to proper AC and ground wiring techniques can ensure minimal risk to one's equipment due to a surge and also can reduce incidents of ground loops and hum in your facility.

Good studio grounding techniques are essential to minimize the damage of a lightning strike. With the proper grounding of your studio equipment and AC power ground, you stand a much better chance of surviving a lightning strike. Instead of losing the entire studio, you may only lose one or two specific items. With adequate surge protection, the damage to the specific item(s) will ideally be minimal (if any).

There are a great number of technical papers, books, methods and philosophies on grounding. Telos recommends you research the subject further and contact a vendor experienced in this field for any grounding recommendations to your facility. For more information on facility grounding and techniques refer to the Internet links below.

Others have used ferrite beads and looped the cords through these. Some people report the same results doing the same trick with phone lines!

Establish a common ground in your facility and make the attempt to route all your grounds to that point.

Choose power conditioning/UPS units suited for your application. Make sure they are rated to handle the equipment they will power. Check for features and options you will need. Verify the surge protection of the device and make sure it is adequate. Frequently check these units for faults, especially after a storm. Buy the best your money can buy.

Don't forget that all telephone and cable related equipment must deal with a "double whammy". Lightning can come from either the power line, or the phone line/cable line (sometimes BOTH!). For example: lightning can come from the phone line and try to work its way to the power line ground (or the other way around). In the process, it will usually destroy the gear …and neighboring equipment! Protect all lines into your equipment.

NOTE: Telos Systems does not endorse or recommend any specific vendor or product. This information is only provided as a courtesy to our customers as a guideline to various surge protection methods/philosophies and possible sources of vendors and products. Telos makes no guarantee as to outside manufacturer's claims of levels of protection to any peripheral equipment. Customer assumes all risks and liability associated with these third party devices outside the limits of the warranties of these devices. Telos warrants its own equipment to the extent of defects in manufacturing and workmanship. Damage to Telos products due to power surges through power, network, audio, and/or telco lines are not covered under warranty. For further details on warranty coverage for your Telos product see your manual or contact Telos Systems customer support.