The Birth of a Flamethrower!! 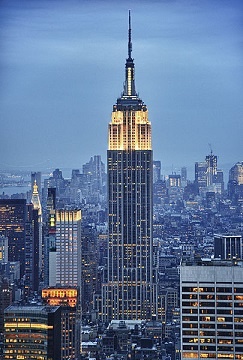 Back when I was in grade school (a time long before electricity), the tallest building in the world was the Empire State Building in New York City. The majesty of that building has always held a special place in my heart; that’s why, in the summer of 1983, it was even more special that I got involved with a project that was to add a twelfth FM radio station to Master FM Antenna System at Empire.

The Master FM Antenna System was designed by Andrew Alford, and it was the first master system in the United States. It consisted of twelve dipole elements that were equally spaced around the 102nd floor observatory, which is just below the dome of the building. There are two levels of twelve dipoles. One just above the observatory, and another just below the windows in the observatory. Actually, anyone who looks out the windows can see the lower level of the dipoles. The photo shown here is a shot of one of the backup dipoles — it should be noted, that in fifty years of service, the backup components have never been used.

The Alford Master FM Antenna was put into operation in 1965 with only two radio stations, but as years progressed, a total of eleven stations came to operate on the system. In 1983, it was not known if another station could be added to the system, but after some consulting from Bob Silliman, and testing, it was decided that a twelfth station could be added.

At the time, my employer was Cleveland’s Malrite Communications. They had entered into an agreement to purchase WVNJ-FM, a New Jersey station was licensed to Newark, and as part of the purchase they had a construction permit to move the transmitter from West Orange, NJ, to the Empire State Building. The acquisition of WVNJ, along with a change of call letters, and format, was to become WHTZ-FM, also known as Z-100!!

The latter weeks of July, 1983, were spent up in the mooring mast of Empire as the combiner equipment was installed, and tested with the rest of the system. We also had to install a new transmitter, which was located in a room on the 83rd floor. Once all of the field testing for the FCC was completed, the morning of August 4th, 1983 saw the new transmitter officially hit the air at 100.3 on the FM dial. Z-100’s Scott Shannon affectionately referred to the new transmitter as “The Flamethrower,” and the station’s top-of-the-hour ID’s mentioned “From the Top of the Empire State Building, WHTZ, Z-100, NEW York!” I still get a chill when thinking about, or hearing that amazing message as voiced by the legendary Ernie Anderson (a Cleveland native, by the way).

Operating a transmitter in the Master An 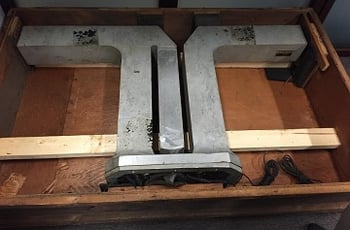 tenna System was not too much different than doing so with a conventional system, where a single transmitter is connected directly to the antenna. Naturally, there were a few factors that had to be considered; in this case, the WHTZ transmitter operated into a combiner, which was the last of a series of combiners. The Alford combining system was known as an “add one” system, which meant the WHTZ combiner was connected to the next station up the system, which was 106.7 (today’s WLTW-FM). Thus the output of that combiner contained both WHTZ and WLTW. From there, that signal was routed up to the next combiner, and so forth. So, for WHTZ’s signal to reach the actual antenna, it had to pass through eleven combiners. Pretty incredible that, for all the possible points of failure, that system operated flawlessly in the years I was the chief engineer of Z-100. As insurance, we did install a single back up antenna, out on the ice shield of the building, and in the event of a system failure or shutdown we were able to switch out of the system and remain on-the-air. Due to WHTZ being the last station into the system, at the bottom of the “add one” ladder, it had the most insertion loss, which required more transmitter output power in order to achieve the correct radiated power out of the antenna.

In my five years there, I remember utilizing the backup antenna perhaps a half dozen times. This was further testament to the system and the NYC engineering community, as we did all we could to insure that the system operated flawlessly. That engineering fraternity included John Lyons, Joe Losgar, Paul Sanchez, Bob Tarsio, Doc Masoomian, Jim Stagnito, Andy Bater, Fred Moore, and others. While all of us worked for stations that competed with each other, we cared for the Alford Antenna as if it was our own.

If memory serves, the only real aspect I remember paying close attention to was AM noise out of the transmitter. This could be affected by slight changes in the combiner brought on by ambient temperature changes in the mooring mast, where all the combiners were located at that time. That area did not have any heating or cooling, so slight temperature-induced expansion and contraction would affect transmitter tuning, and AM noise as well.

Today, the Alford Antenna has been relegated to back up duty, as a new master antenna was installed in the early 1990s. Likewise, the old combiner system in the mooring mast has been replaced with a new system, located in a temperature-controlled room.

Recently, I was invited to attend a reception at Empire to celebrate fifty years of service t 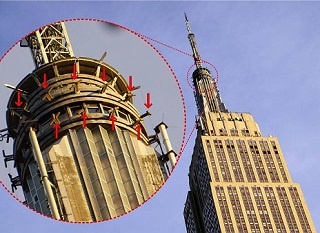 hat this antenna system has provided. It was an honor to be asked to speak at the event about some of my experiences with the system. Check out this cool video of the Steely Dan tune “FM,” which was broadcast over WCBS-FM to honor the celebration.

The Empire State Building Antenna will always hold a special place in my heart. Reason being is that I got to enjoy a journey from “Worst to First,” not once… but TWICE! First with Z-100, as we set a broadcasting record when the ratings of the station went from last-place in the market to #1 in just 74 short days, a feat that had never occurred before, and hasn’t happened again since! The second time involved our own audio processing company, Omnia Audio, as we took (what was then) Cutting Edge Technologies from worst to first in audio processing stature the world over.

And as a final twist, one of the first Cutting Edge clients was none other than Z-100, broadcasting that take-no-prisoners audio from the Top of the Empire State Building.