The Empire State Building: Where It All Began

New York City’s iconic Empire State Building’s prominent place in the history of FM and television transmission might have never come about unless someone’s idea for the top of the building turned out to be one of the wackiest proposals since the Atlantic tunnel between New York and Europe.

The original idea was that zeppelins transporting passengers to midtown Manhattan would be moored to the top of the building and a gangplank would drop down, allowing people to descend to a tiny, outside walkway on the 103rd floor. 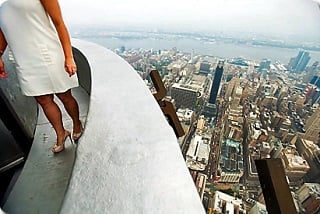 Here’s the walkway (see graphic to the right).

Not only was the gangplank/walkway idea nuts, but evidently no one considered the issues of trying to secure a Zeppelin being batted around by the high winds at the top of such a tall building.

After one disastrous try -- if they were ever really serious about this -- the idea was abandoned.

Enter David Sarnoff, head of RCA/NBC who quickly snatched up the exclusive Empire pinnacle rights for his experimental television transmissions. In late 1931, two 12-foot poles were erected and the transmissions commenced.

At about the same time, Major Edwin Armstrong began a cooperative venture with RCA, testing his new FM system from the Empire, but soon the Major and Sarnoff had a falling out and Armstrong was told to remove his equipment to make way for further television experiments. Armstrong, fuming, built his own tower in Alpine, NJ, but that’s another story.

Through the years, the RCA/NBC television antennas were updated. In 1940, the first commercial FM station appeared on the Empire, NBC’s W2XWG, (later WNBC-FM and today’s WQHT). 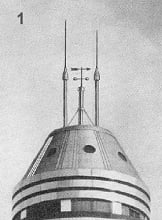 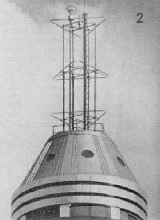 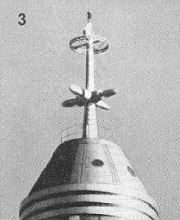 Hover over graphics for details.

But by the late 1940s, television viewers in Manhattan were up in arms. Since NBC had the exclusive on the Empire, the six other New York TV channels were forced to transmit from different buildings all over the city, making receiving antenna positioning impossible. Reportedly, the FCC stepped in and the top of the Empire became available to all. The result was the construction of a massive tower designed to hold all of the TV antennas and a few of the FMs. 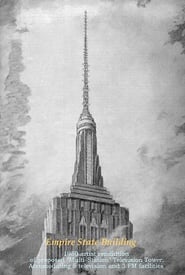 However, by the late 1950s, it was obvious that a new FM transmission approach was necessary to address the need to transmit the growing amount of New York FM stations from the Empire.

Enter Andrew Alford, a brilliant Russian born engineer, who founded Andrew Alford Consulting Engineers in 1946, one of the most accomplished antenna design organizations of its day. Alford and his team designed the world’s first FM master antenna system, which allowed several stations to broadcast simultaneously from a common antenna system via a series of bays ringing the Empire State Building’s observation tower above and below the 102nd floor observatory windows.

Although now delegated to backup service, the Alford antenna ringing the Empire is still fully functional after 50 years, a testament to the engineering and manufacturing integrity of Andrew Alford.

On October 29, 2015 a celebration of the 50th anniversary of the Alford Antenna was capped with a fantastic light show on the Empire State Building synchronized to the song “FM” by Steely Dan, broadcast from the current master antenna system on the Empire via WCBS-FM. Many radio luminaries, including Frank Foti of The Telos Alliance, David Bialik of CBS, Scott Fybush, Tom Silliman and several others attended a rooftop event and discussion session at the Monarch Bar on West 35th Street, with a spectacular view of the building where it all began.