Having founded Camdenton, Missouri Contemporary Christian station Spirit FM in 1985 and building it from the ground up over the last 30-odd years, President and General Manager Jim McDermott has an acute interest in ensuring the station keeps current with the latest broadcast technology. At the same time, equipment that’s intuitive and easy to use is also a concern. 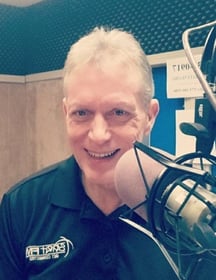 To meet both these objectives, Jim chose the Axia iQ AoIP console system. While the plan was to make the move to Axia all along, adopting the iQ console happened by accident.

“My first experience with Axia actually was a little bit of a mistake. I ordered two of the Radius consoles thinking I could patch them together and come up with everything I needed. I got them in here and found out that wasn't going to work. So I worked it out with our Axia dealer and sent them back, got a credit, and switched over to the iQ system, which has been great.”

Spirit FM has an iQ with a six-channel expander board, and the staff loves how the system is so simple to set up and easy to interface other equipment with it. Jim points out that switching program inputs around is quite simple as well. “I love that you can not only go in and switch inputs around, but you can quickly change an input on the board itself in a matter of three or four clicks,” he says. “You can move it to mic 1 or mic 2 or whatever you want to do, and you can move things around without a patch panel. It's all right there.”

I love that you can not only go in and switch inputs around, but you can quickly change an input on the board itself in a matter of three or four clicks.”

Jim says he’s been impressed with the reliability of the iQ. “We had a major lightning strike. We were unable to access half the system through the interface because the top board was damaged, but it still worked! That was the crazy thing about it. We were still getting inputs and outputs.”

Spirit got a loaner and got their own iQ back a couple weeks later. “In two hours we took it out and put the other one in, then did it again two weeks later. We were back on the air in a matter of minutes.”

“We've been very satisfied. I recommend the iQ to just about everybody that is in the market for a console."

Despite the fried board, the experience with Telos Alliance’s Support and Service departments was a positive one—as it has been every time Jim’s needed their help. “Every time I've called, they've answered every question I've had.”

Jim adds that the iQ has been a boon for Spirit FM’s remote studios. “We've been able to do some pretty fancy things with our remote studios. Setting it up to record the phone automatically was easy. I'm really happy with the flexibility of the system and ability to design it to do exactly what we need.” Ultimately the plan is to connect Spirit FM’s two iQs with plans for a third via Livewire.