Dan Feely, Chief Engineer of Mount Wilson FM’s Global Jazz, shared some techniques in building translator racks that I thought you’d like to consider. First, Dan builds them all the same. By adopting the same complement of equipment, troubleshooting is more efficient and fewer spares are needed. So much the better if you can standardize on equipment brands. By adopting this technique, which is also shared by EMF in Rocklin, CA, installations are smoother. 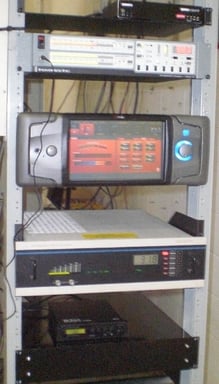 There’s also an advantage to racking everything up at your shop–instead of “on-site.” All of your tools and parts and supplies like wiring, wire ties, and connectors are in your shop–some might be forgotten if you do the install at the translator site. In addition, the weather conditions may not be ideal. Better you place everything in the rack in the comfort of your shop. Finally, if you have a dummy load, you can test the rack before you install it.

To further simplify the operation, Dan racks up the equipment in the order of signal flow. Again, this helps in both troubleshooting and quickly understanding the signal path, especially if an engineer unfamiliar with the site is visiting for the first time.

To further simplify the operation, Dan racks up the equipment in the order of signal flow. Again, this helps in both troubleshooting and quickly understanding the signal path, especially if an engineer unfamiliar with the site is visiting for the first time.

Dan’s equipment positioning starts with the incoming signal at the top of the rack. In Dan's case, that’s with the codec being used as an STL. Its output feeds his station's Omnia.11 audio processor (Dan doesn't skimp on the processing).

Next in line is an exciter, whose output feeds a filter and then the transmission line to the antenna. Looping things back to the top of the rack is a modulation monitor, which feeds off-air audio into the codec for confidence monitoring back at the studio.

Dan adds, "Don’t forget the signal flow block diagram or schematic!" Even for simple translator installations, having a copy of the equipment hookup both on-site and in your files back at the office is helpful. It’s also a good idea to identify the equipment models and serial numbers. This can speed up repairs, getting a Return Authorization, or determining if a model needs a software or firmware update. While you’re at it, Dan recommends you snap a picture of the equipment on your cell phone. The picture can be helpful if you have multiple sites, and different brands of equipment. Finally, add any special settings for the equipment.

For more broadcast engineering tips from John Bisset, check out these posts:

The Bisset Brief: xSelector in Action at WAMU

The Bisset Brief: The Little Console Engine that Could