Forward : This article was originally written in 2015 by Dr. Barry Blesser, Director of Research at the 25-Seven division of Telos Alliance. It has been updated and checked for any inconsistencies in accordance to products, updates and modern technical capabilities. While this is an older article, we at Telos Alliance believe it is still relevant in terms of the 25-Seven’s Voltair Watermark Monitor & Processor, the information available for it and its capabilities. Thank you for your continued support.

With the number of installed Voltair units now approaching 600, there has been more than enough time for an explanation about why this watermark processor actually works as well as it does. If it didn’t work, nobody would care if a station wasted its money and believed in snake oil. All sides of the debate quietly accept the fact that it does work. Not surprisingly, the struggle has moved to interested and powerful parties who attempt to control the explanation in order to control the debate’s outcome.

The various explanations reduce to two classes: (a) Voltair works because it improves on some deficiencies and limitations of the original PPM system, capturing missing listeners, or (b) Voltair works because it produces “phantom listeners,” that is meters registering credit without humans listening to program audio, hence producing an inflated count of audience size.

Explanation (a) leads to the conclusion that Nielsen should adopt Voltair technology or give every PPM encoding station a Voltair so that there is a level playing field with the defects fixed for everyone. Explanation (b) leads to the conclusion that Nielsen should make the use of Voltair illegal because it is undermining an otherwise reliable system. Reliability has great value for stations and advertisers. 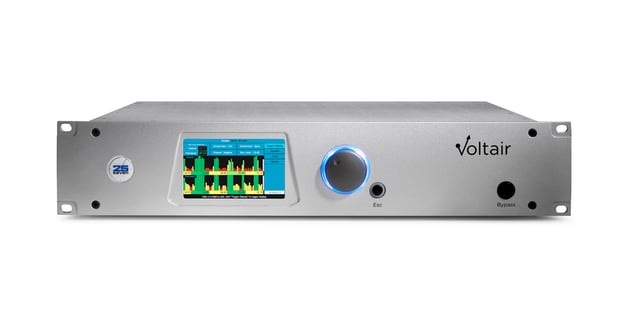 The debate between the two explanations involves the quantity of human ears that can hear the program content versus the quantity of portable meters that can hear the watermarking codes. In an ideal watermarking system, Ears and Meters would either both hear their respective signals or neither would hear their signals. Such a watermarking system could be called perfect. Consider the following experiment as a way to explore the correlation between Ears and Meters.

The watermark volume is determined by the watermark encoder at the station based on masking by the program in the 1 to 3 kHz region. If this region has strong energy, the watermarking signal will also have strong energy; if the region has weak energy, the watermark signal will also have weak energy. Over the range of audio content types in the radio industry, the watermark energy will vary by a dramatic amount, perhaps as much as 1000:1. Such a large change in energy will produce a correspondingly large change in watermark drop-out distance. Using a vocal analogy, the watermark intensity varies from a quiet voice to a barely audible whisper. Some program types produce watermarking that is undetectable. While the Ear hears the full audio spectrum and its contribution to intelligibility, the Meter only hears tones whose amplitude was determined by a small part of the program spectrum.

In an extension of this experiment, one could also show that studio audio processing, like EQ, dynamics, reverb or distortion boxes, and limiters also change the program energy in the 1 to 3 kHz, which changes the energy of the watermark tones, which changes the drop-out distance of the Meters. Similarly, some stations have sorted their audio inventory on the basis of the spectral balance of their play list. The watermark drop-out distance varies dramatically even when the loudness of the program is held constant.

One does not need the formal training of a signal processing scientist to run the above experiment over a wide range of program types. And in the spirit of real science, the details of this experiment should be completely public so that anyone could reproduce it and get the same results. I have presented the discussion without using mathematics but the results would be even more clear-cut if the experiment was performed more scientifically.

We now turn to the question of Voltair. If this device dramatically amplified the watermarking tones, the drop-out distance could increase to the point where Meters detected codes without listeners being able to hear the program. This is simply not the case. Voltair is basically an AGC (automatic gain control) compressor that keeps the tones higher in amplitude when they are on their way to becoming too small. Voltair produces tone energy similar to that of a well encoded audio signal.

The tones are perceived as being louder in part because they are of longer duration. Why does increased duration make a difference? Because the detector cannot identify the frequency of a tone if it is too short. When a tone is relatively constant for the full half second, all is well; but if the tone lasts for less than a tenth of a second, the Meter has no idea about its frequency. And the exact frequency is required to determine the meaning of the codes. Tones are truncated when the spectral content of the program is in short bursts. Interestingly, speech is comprised of short spectral bursts.

There is another problem that Voltair solves. The primary limitation of watermarking is that the tones in a given channel are overwhelmed by the audio program at the same frequency. The spectral content of the audio that enables the tone generation also appears with the tones at the Meter. That ratio is too conservative such that the Meter fails to separate the tones from the program. Even a very small boost in tone energy relative to the audio program at the same spectral region is sufficient to enable the Meter to work as intended. At the time PPM was initially tested, it was decided to significantly reduce the intensity of the tones to avoid potential audible artifacts. That reduction arguably went too far. Moreover, audibility of tones is unrelated to drop-out distances. Audibility is a subjective aesthetic consideration that varies with listeners and programs.

One unnamed executive asserted that with Voltair, a Meter in another room with the door closed would detect the watermark codes even though the listener could not hear the program. A parallel was drawn that this is the equivalent of a television meter giving credit for watching “snow”. This might be the case if Voltair had an enhancement maximum of 300 instead of 24; however, at 300, nobody would listen to the program because it would be complete noise. Obviously untrue, a fantastic claim like this needs to be demonstrated in a public space with actual audio and independent scientists. The industry is still waiting.

Having thoroughly put to bed the myth of the phantom listener, there is another argument that is being quietly floated about the dangers of Voltair; one that is a zero-sum game between radio stations and advertisers. Assume for the moment that the current PPM undercounted listeners, and assume that advertisers have been paying based on undercounted listeners according to some contractual rate. A change in the reported audience size would require additional payments without there actually being additional listeners. Voltair does not increase the advertising penetration: a listener is a listener even if not counted.

Voltair changes the bookkeeping but in an inconsistent way, depending on the degree to which a given program has more or less undercounted listeners. If Voltair makes the ratings numbers more accurate, and if advertisers want to renegotiate their rates per counted listener, that is a legitimate trajectory for a business relationship. If the missed listener percentage was constant, the calculation would be simple. But it is not. Some program types without Voltair produce

accurate measurements, while others do not. Voltair reduces the influence of random program spectra on the ratings. Listening preferences for program types is a legitimate criterion, but success on the basis of time-frequency statistics between 1 and 3 kHz (the part Voltair can improve) is where a purely technical artifact influences outcomes.

In the decade since PPM was rolled out, radio has changed dramatically as programmers, who, “teach to the test” of PPM’s technical properties, have shortened or eliminated spoken word segments, moved clocks around, and even dumped whole formats. Now, with Voltair providing tremendous insight as a monitoring / measurement tool, this dynamic has accelerated as programmers have proven to themselves the correlation between PPM’s technical underpinnings and raw meter count. Assuming Nielsen refuses to address technical issues raised by Voltair, we can expect this trend to accelerate. Call it the law of unintended consequences where a measurement methodology drives programming decisions, determines careers and discards content, all in service to watermarking success.

Critically, alternative delivery media without this PPM technical bias will offer a wider range of program content to match their listener demographics. Terrestrial radio will rapidly become yet more irrelevant as listeners migrate to delivery vehicles that offer what they want to hear even if the time-frequency spectra of their programs does not match PPM.

HD radio was intended to be a major innovation to make radio more competitive. Now, initial laboratory research has provided us preliminary conclusions that HD2, HD3 and streaming audio has even greater difficulty passing PPM codes. If continuing research results in proving the premise, then advertisers will never have to pay radio for these uncounted listeners and there will be no additional revenue for our industry.

In summary, just using the monitoring capability of Voltair makes it easy for program directors to push only those cuts that encode well into the air stream regardless of listener preferences. Other listeners will continue to drop off as they seek and use other delivery technologies. But by employing the enhancement capabilities of Voltair, terrestrial radio will not have to be defined by the lab decisions of an engineer who created a system almost 15 years ago. The way that the radio industry handles the current Voltair controversy will influence its likelihood of surviving.