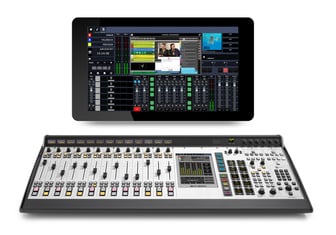 We're excited to share that our Axia IP-Tablet Virtual Radio Software has garnered not one, but two NewBay Product Innovation Awards from Radio and Radio World magazines.

Now celebrating its fifth anniversary, NewBay’s Product Innovation Award recognizes excellence in manufacturing of products to serve the TV/pro video and radio/online audio industries. Winners are selected by a panel of professional users and evaluation criteria include innovation of concept and design, creative use of technology, price value, and suitability for use in a broadcast TV/pro video or broadcast/online radio environment.

Read on to learn why this product is getting so much buzz, with several awards to its name, including the 2017 Radio World International IBC Best of Show Award, 2017 Best Product of the Year Award from Salon de la Radio, and more.

Audio over IP (AoIP) has become the standard for broadcast facilities. Adoption of AoIP allows broadcast plants to be more powerful, less expensive to buy and maintain, and faster to build. In a never-ending effort to optimize their workflows, broadcasters now want to take advantage of what AoIP enables next: the ability to control content creation virtually. Presenters now get to see and control their gear via optimized graphical user interfaces (GUI) no matter where they are—in the studio or on remote. With Virtual Radio control, they can put themselves on the air from anywhere.

The one-of-a-kind Axia IP-Tablet software is paving the way for the virtual radio studio. It virtualizes the monitoring and control of broadcast gear on a Windows tablet (or PC). Anything from a low-cost Asus model to a high-end Microsoft Surface can run any of the IP-Tablet Virtual Radio software modules. Sold individually, broadcasters can buy those software modules that are most relevant and beneficial to their studio setup, such as the Telos Systems VX or VX Prime phone systems, the Telos Z/IP ONE IP-audio codec, the Omnia.9 audio processor and Omnia VOCO 8 mic processor, Axia Fusion Console via modules that control the Axia PowerStation and StudioEngine, xNode control, Axia Pathfinder buttons, and other HTML5-enabled gear. The Metadata Tools app allows you to pull metadata information from your automation system to display on the tablet screen.

"The IP Tablet has created a lot of excitement because it is so capable, flexible, and works across a large range of products inside and outside the Livewire ecosystem. It's ultimately customizable yet easy to use," says Marty Sacks, VP of Sales, Support, and Marketing at Telos Alliance. 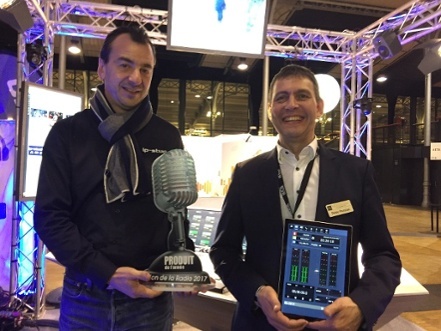 Since it launched, IP-Tablet has racked up several awards. Here, Jérôme Gahery, IP-Studio, and Peter Passian, the Telos Alliance, receive the 2017 Best Product of the Year Award for IP-Tablet from Salon de la Radio.

Aside from virtualizing control, the IP-Tablet also allows you to manage user rights for device access, linking a user’s profile to their needs. You can mount the Axia IP-Tablet right into your Fusion console with a beautifully machined, completely flush IP-Tablet Mount or use it on a freestanding tablet. Adding great value to your Axia console purchase, the Axia IP-Tablet Virtual Radio software puts your most-used console functions right at your fingertips.