Of all of the legendary inidividuals associated with the broadcast and music industries in the United States, there is probably no one more responsible for the advancements in broadcast industrial design, audio and video consumer good design, and the look and feel of transmission equipment and broadcast facilities in general than John Vassos.

Born in Romania to Greek parents in 1898, he eventually moved to New 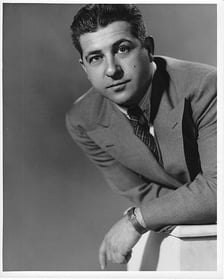 York City, where he opened his own design studio in 1922, specializing in cutting-edge advertising featuring dramatic graphics and bold, modern styles. During this period, he also began dabbling in the actual industrial design of some of the products he marketed. One amusing story is that he created an ultra-thin perfume bottle, which not only looked chic, but could also be reused as a hip flask for liquor in the prohibition days!

His most famous non-broadcast industrial design was the modern turnstile, which is still in use today in various public venues. Created in 1932, it was a marvel of smooth, streamlined style, and was a practical improvement over the old fashioned turnstiles, which tended to catch clothes and fingers.

In 1933, Vassos was hired by RCA as the chief industrial design consultant for their product line and almost overnight transformed the look of radios from objects which suggested church cathedrals or pieces of traditional furniture to distinctive, standalone devices with styling as modern as the technology they represented. He also made the functions of the radios more intuitive. For example, he replaced the traditional semi-circle dial on certain models with the now familiar slide-rule design. He also added his vision to the design of the first commercial television sets available in 1939, a gorgeous portable 78 rpm record player, and several iconic RCA microphones.

For the 1939-40 World’s Fair in New York, he designed a room in a house called a “Musicorner,” which predicted the home media room decades ahead of its time. Vassos also designed the first 45 rpm record player in 1948, the first RCA color television camera in 1953, as well as various RCA transmitters. He even designed some of the transmitter buildings. He remained at RCA for many years, designing the color-organized control panel for the RCA 501 computer system in 1958. In 1961, he drew some sketches for what he thought TVs would look like in the 1970s. Looking at these renderings today, it’s astonishing how closely they resemble the modern flat screens of post-2000!

It should also be noted that Vassos moonlighted a bit during this period and designed one of the first modern jukeboxes in the late 1940s, the Mills Constellation, which could select forty song selections from twenty-five, 45 rpm records.

Following is a gallery of the various design creations of John Vassos. It is remarkable that this one man had so much influence over so many groundbreaking and iconic items in the broadcast and music industries.

For more stories on broadcast history and vintage radios, check out these blog posts:

The Empire State Building: Where It All Began