Keeping Your Broadcast IP Network Safe in the Age of IoT

Considering an Audio over IP (AoIP) network for your facility makes sense; it’s faster, cheaper, and better than previous technologies. By converting to AoIP, you not only tap into the power of current technology, you allow your facility to leverage the enormous universe of “off the shelf” IT devices that are used worldwide, and not just in the broadcast industry.

Just like those connected IT devices, IP-based broadcast gear can open up your network to vulnerabilities, which is why it’s important to take measures to secure it. Broadcast security has always been a priority. Since the first broadcast cable, there was a pair of wire cutters. The security methods are just different now. Here are some of the most common questions I get asked about network safety, and our advice for keeping your network impenetrable.

How Do I Keep My Broadcast IP Network Safe?

How Do Facilities Avoid Tensions Over Who Controls the Studio—the Engineer or the IT Pro?

IP broadcast audio represents a different type of IP network traffic than many in the IT worlds of banking and web commerce transactions are used to. But the fundamentals of IP networking are the same. Most valuable is a good IT person who is open-minded and curious, who understands that broadcast media is simply a new and interesting capability that the same IT networks have always had. This attitude is the doorway to productive and good practice, rather than operational conflicts. The fact that one can do banking over the internet (the least secure of all networks), is an example of safe IP networking, and IT engineers are making that possible.

A healthy division of labor is for IT to plan, implement, and maintain the reliable network to make the connections. But the media professionals make the interesting shows, the high-quality programming, that the audience wants to hear. Only the audio professional knows if the end result sounds good, and what it takes to produce that.

What Kind of Questions Need to be Asked When Using IP Audio in the Growing Internet of Things?

Is the network secure? Controlling access to the network used for broadcast is the first, best defense. With a completely open and uncontrolled network, it is difficult for the attached devices themselves to make the network behave the way it needs to.

Said another way, the goal of IP networking for broadcast is to use IP network technology to get the broadcasting job done. That’s not saying the same thing as broadcasting over unsecured or uncontrolled networks. It is important see this fundamental difference.

Is the broadcast network openly interconnected with the general internet? This should give pause. Some of the power of IP connectivity is the convenience of access (for example the chief engineer, in the middle of the night from home), but access can be enabled through secure methods, not open connections.

“...the goal of IP networking for broadcast is to use IP network technology to get the broadcasting job done. That’s not saying the same thing as broadcasting over unsecured or uncontrolled networks. It is important see this fundamental difference.” 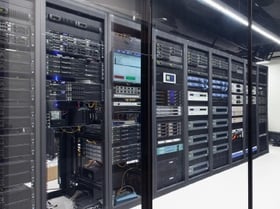 These are all accepted best practices for securely enabling connection and access to IP networks. The simple precaution of not leaving default passwords, for example, has long been best practice in the IT industry. And there are a range of other techniques beyond these. We can expect smarter, safer and more capable networks in the future.

To inherit these present and future network advantages, we must leverage IT equipment for broadcast, so that broadcasters don’t themselves have to invent and develop signal transportation methods and equipment that essentially do these same jobs.

Having a good IT professional, an even better division of labor, and being vigilant will make your broadcast network safe and secure.

Read more about IP Networks and security in these blog posts:

Getting Serious about Security in Radio-Centric Networks and Appliances