AoIP Is the Way to Be for RMG

The Moscow headquarters of Russian media conglomerate Russian Media Group include five radio stations and two television stations. Starting a decade ago, the radio stations began rebuilding their facilities using an Axia Livewire AoIP infrastructure. Axia AoIP consoles, Telos phone systems and digital hybrids, and Axia xNodes were used both as the system core and also to extend the Livewire infrastructure to AES digital audio, and analog audio. Livewire’s ability to handle general purpose interface (GPI) information together with the physical GPIs provided on Axia xNodes and Axia consoles extended the core infrastructure to include GPI on equipment that did not support Livewire+ AES67 AoIP natively. The AoIP infrastructure was soon used throughout all of the radio studios including ISDN interfaces for outside broadcast.

The universal availability of all audio sources and destinations, the ease and speed of installation and the availability of Axia interfaces to extend AoIP to a wide range of audio and automation systems soon came to the attention of the television engineers that shared the facility. Soon Livewire became part of the television station’s audio infrastructure. Andrey Mamontov, CTO of Russian Media Groupsays “Usage of Livewire offers great flexibility in management of audio signal delivery for any program… In addition it greatly speeds up audio workflow for the creative team.”

“Usage of Livewire offers great flexibility in management of audio signal delivery for any program... In addition it greatly speeds up audio workflow for the creative team.”

The flowchart below shows how RUTV integrated Livewire+ AES67 AoIP infrastructure into the TV facility.  By placing an Axia xNode in the TV studio, only a single Cat 5 network cable is required to bring up to eight audio pairs into the master control mixer. The same cable carries eight audio pairs from the audio mixer back to the studio. Studio microphones, IFB, studio talk back and cue can all be handled on the single network cable. An SDI de-embedder/re-embedder allows audio from new clip server to be controlled on the mixer as well as a six-line studio telephone system, talent microphones and feeds from outside broadcast. Control room monitoring, studio cue, talent IFBs, and mix minus to telephones and outside broadcast are all handled using very few Livewire+ AES67 AoIP cables. 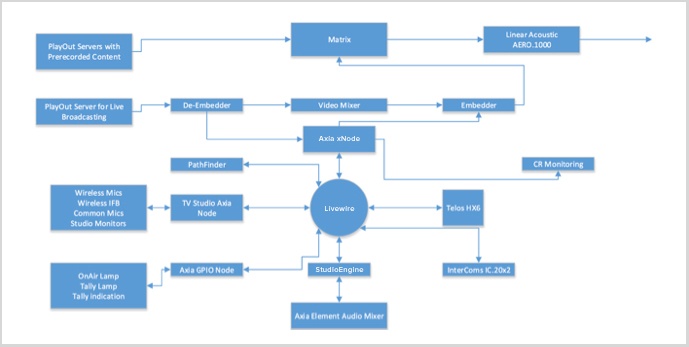 Seeing Livewire+ AES67 Audio over IP work in a broadcast radio environment made the decision to use Livewire for television audio an easy one to make. RUTV has been using AoIP for six years already, placing them way ahead of most of the industry in recognizing the benefits of AoIP in the television environment.

For more tales of AoIP adoption in the television world, check out these stories:

Choosing an AoIP Format for a Broadcast Production Facility with AES67

Harnessing the Full Potential of Audio over IP

Audio over IP and the Future of Television