Omnia.9sg Gets Major, Free Update that Makes ANY Processor Sound Its Best

Omnia.9sg just got a major, free software update, v.3.16.52 (available on the Omnia.9sg page in the sidebar). While the 9sg has always been way more than a stereo generator, this software update gives it that much more functionality, including Livewire+ AES67 for total compliance with the standard and a new clipper designed by Hans van Zutphen, along with dozens of other features. Here, we get into the background of what exactly a stereo generator does, and how the processor-agnostic Omnia.9sg can benefit any station with final-stage processing that is your processor's secret weapon.

What Is a Stereo Generator?

An FM broadcast signal is made up of more than just a simple stereo (left/right) audio signal. It is a composite signal, that is, a set of various individual signals that have been combined or multiplexed together by the stereo generator. This is why a composite signal is sometimes called an MPX signal. This multiplexed signal is then de-modulated in the listener’s radio.

The stereo generator must also create a signal that allows the broadcaster to operate legally within its licensed parameters so that it does not interfere with other stations. One of these parameters is modulation. Precise control over modulation is accomplished by a clipper that clips off audio peaks that would otherwise cause over-modulation.

All standalone FM audio processors have a stereo generator. This is often called the back end of the processor since it is located at the end of the signal path.

In contrast, the front end of the processor contains dynamics processing. This includes equalization, compression, and limiting, which are tools that help shape the sound of the audio before it gets to the stereo generator and creates a station’s signature sound.

When both the front- and back-end stages exist in a single, standalone processor, the customer must decide if the processor should be placed at the studio or at the transmitter.

In addition to controlling peak modulation, clipping also makes a station sound louder on the dial. Programmers often feel this increased loudness is an advantage because stations that “jump off the dial” make listeners believe they are more powerful and therefore worth listening to, whereas a quieter station sounds weak. This theory has led to what's been called the loudness wars in FM radio where stations continually compare themselves to one another and find ways to be ever louder.

Unfortunately, more loudness through more clipping generates more audible distortion. The irony here is that while a commanding presence on the dial may result in a brief initial positive impression of the station, the distortion will soon cause listeners to tune out.

Hans van Zutphen, audio processing designer and maker of Omnia.11's famous Perfect Declipper, designed the new clipper featured in the software update for the Omnia.9sg. This clipper will be used exclusively in all future shipped units. This psychoacoustically-controlled distortion masking clipper is louder, cleaner, and more efficient. It takes into account how the human ear perceives distortion and uses that information to effectively mask it, leaving only clean, distortion-free audio on the air. The new clipper also uses less internal processing power from the CPU to get the job done faster, resulting in lower latency.

Omina.9sg is processor agnostic, making the processor you love even more loveable. That is, it can be used to improve the audio quality and loudness of any station with any processor from any manufacturer. If a station can’t afford a brand new top-of-the-line processor, or if they like the sound of the front end of their current processor but want better back-end performance, they can add a 9sg for less than half the cost of a new all-in-one box. 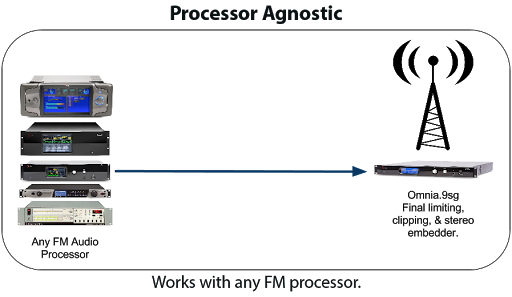 We know that the main processor must be installed at either the studio or at the transmitter. Each location has its advantages and disadvantages. Placing a processor at the studio is often more convenient as some transmitter sites are difficult to access, but doing so can compromise quality and loudness as STL audio quality varies and the clippers found in other stereo generators are often mediocre at best. Some transmitters have built-in stereo generators but quality and features vary.

Split processing—placing the main processor at the studio and performing final stage limiting and stereo generation at the transmitter—can be an ideal, no-compromise solution with the Omnia 9sg. 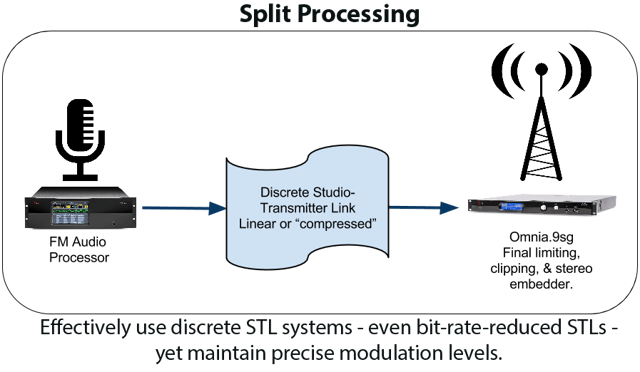 Many FM broadcasters have their main transmitter at one tower site and their backup transmitter at another. A stereo generator is required at both transmitters, which often means two complete standalone processors. Installing an Omnia.9sg at each transmitter site allows a station to use the same main processor at the studio to feed both sites, which represents a potential cost savings and consistent processing between the main and auxiliary sites. This applies to applications where a common STL is shared between the sites or when individual STLs are used.

In Europe, it is common for a national broadcaster to work from a single studio location and have dozens or even hundreds of transmitter sites located throughout the country. The appeal of having one main processor at the studio and an Omnia.9sg at each transmitter site works brilliantly on this larger scale as well.

When configured with the local audio insertion option, these national broadcasters can also interrupt network content and insert localized content at each transmitter site such as local traffic, weather, or geo-targeted advertising. 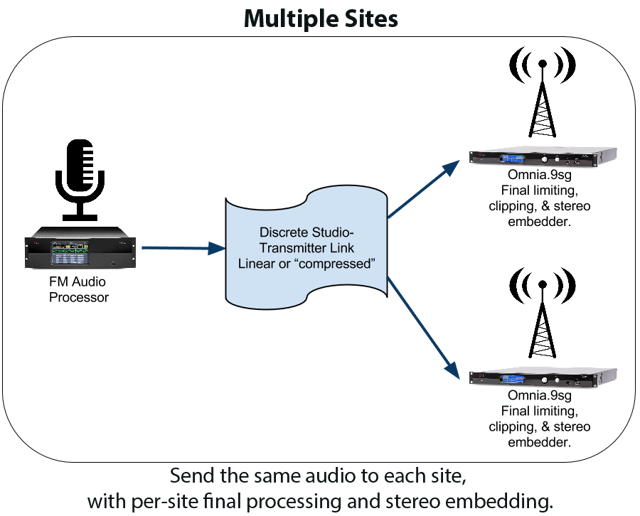 Omnia.9sg can now store audio on its SSD for internal file playback. The playback system can be used as a backup source in case something upstream in the chain fails (STL, studio, playback automation system), or for the insertion of local ads, IDs, weather, etc. To support local playout at the transmitter, Omnia.9sg includes a highly capable built-in 4-band processor of its own. Based upon the dynamics processing found in Omnia.7 and Omnia.9, it includes over 20 newly created presets designed specifically to work with Omnia.9sg’s clipper.

Optionally, this internal processing can be licensed to process auxiliary input streams, turning your 9SG into a fully functional backup processor.

Research shows that ratings encoders and/or enhancement devices such as the 25-Seven Voltair benefit from being fed processed audio. Some processors have special “insert points” that make this possible internally, but many do not. Placing the main processor and the encoder at the studio and using Omnia.9sg at the transmitter can help facilitate this. 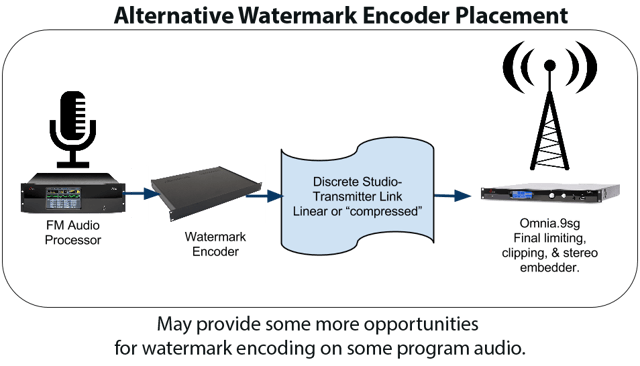 For more stories of stereo generation and final-stage processing, check out these blog posts and the Omnia.9sg video: